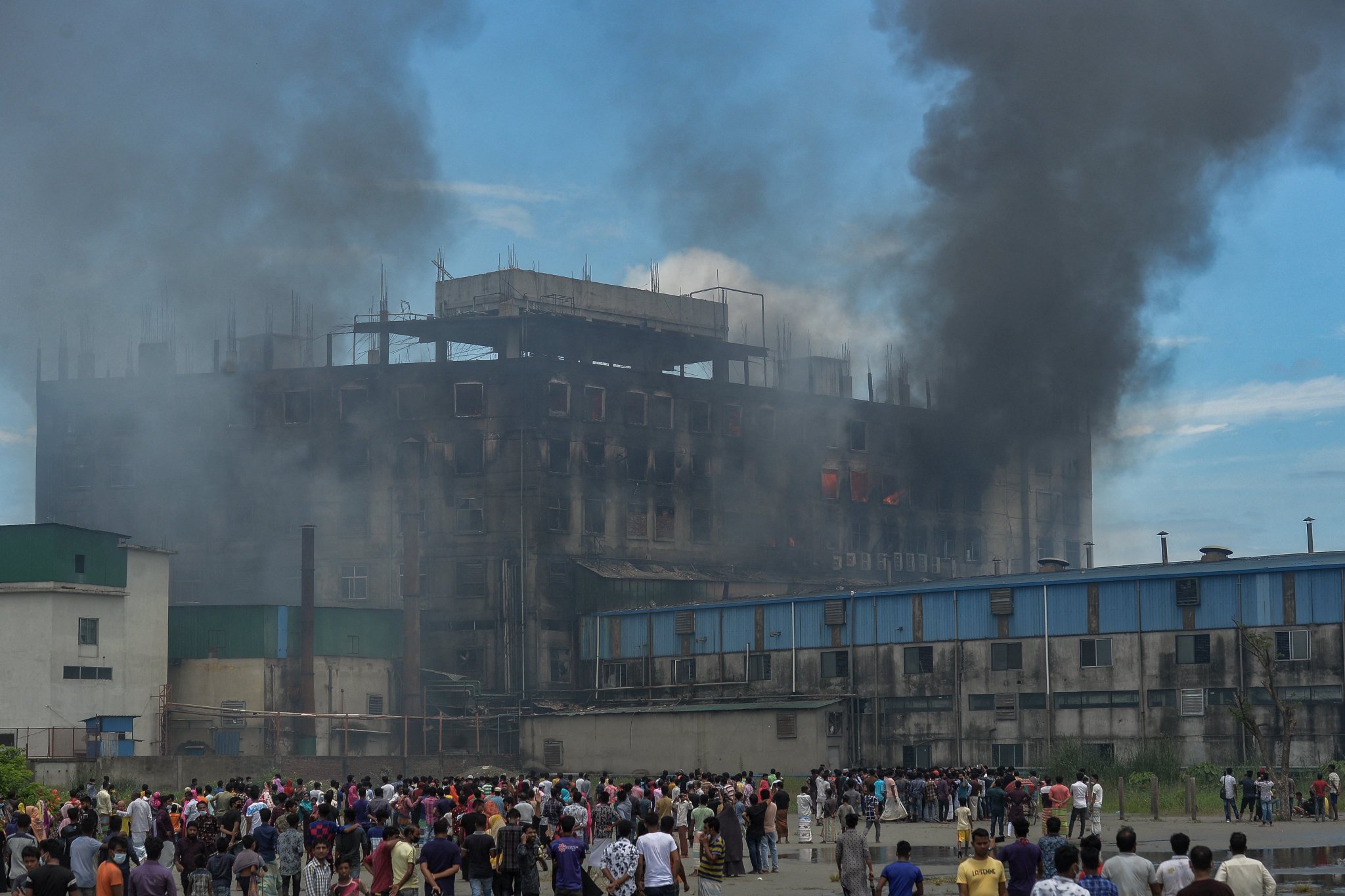 On Thursday 8 July 2021, around 16:30, the five-storey Hashem Foods factory in Narayanganj, Bangladesh went up in flames. Fire Service officials reported that they were not informed about the fire until around 17:50.

The current number of dead stands at 52. This includes many children. Several jumped out of the building and either died as a result or were severely injured, as a result.

These illegal child labourers were locked inside the factory like cattle. The main exit and gates were closed. These innocent children, forced to work at the cost of their education, were subjected to a death that is more terrifying than any nightmare.

Locking children inside factories is a tragically common practice in Bangladesh. It is done to make sure children don’t sneak outside to play while on duty, to ensure every last drop of product is wrung out of them.

Bangladesh has been plagued by similar disasters throughout its recent history. Super-exploitation of the Bangladeshi working class, under capitalism, is endemic.

The hellish working conditions, acute nature of climate emergency, combined with the failures of the corrupt capitalist system in Bangladesh laid bare by COVID-19 create a situation of unimaginable suffering.

This is the true nature of capitalism, which is built on the pillars of slaughter, exploitation and slavery. The young lives in the Hashem Foods factory were sacrificed by conflagration on the altar of profit.

Regime rotten to the core

Bangladesh is effectively a dictatorship under Prime Minister Sheikh Hasina. The PM’s Awami League party is built on the back of armed thugs and systemic repression of the working class.

Nationalistic sentiments are always drummed up during times of crises, in order to distract from the crisis of the rotten capitalist system.

Antagonism between nations and religions is used as a convenient tool by the ruling class to divide the workers and distract them from the brutality of the regime. But all capitalists are out to protect members of their own class. The Hashem Foods factory is under Pakistan’s Lahore-based Shezan International. But this is clearly not a question of the owner being Pakistani. The Bangladeshi capitalists are just as bad.

The nationalist antagonisms fanned by the Bangladeshi ruling class against the Pakistanis are merely a smokescreen, an attempt to divert the blame away from the government and the capitalist system. Against the workers, and their demands, the ruling classes of both nations stand united.

Safety, the abolition of child labour, and a proper living wage are never going to be achieved under the decrepit Bangladeshi capitalist system; only the struggle for socialism can win a decent existence for the proletariat in Bangladesh.

Workers of Bangladesh often strike and protest. Many times, these protests turn into violent clashes with law enforcement. The Bangladeshi proletariat are not afraid of a fight. However, without a party based on a genuine socialist programme, the energy of the Bangladeshi workers’ struggle is dissipated ineffectively.

The parties of the so-called “communists” in Bangladesh have long ago given up any genuine revolutionary outlook; they have bowed the knee to be rewarded with lucrative, comfy positions in the current regime. Calls for collaboration between the working class and members of the Bangladeshi ruling class must be rejected. Class collaboration and division of the working class have always led to catastrophe in South Asia.

The salvation of the Bangladeshi workers can only be carried out through the socialist transformation of society. The Bangladeshi proletariat have an unfinished revolution on their hands, beginning with the 1971 struggle in East Bengal.

The flames that scorch flesh and char bone care not if the victim is Indian, Bangladeshi, Pakistani, nor Sri Lankan. The crushing bricks, rods, and cement care not if their victims are Muslim, Hindu, Buddhist, nor Christian. The socialist revolution is the only road forward for the workers of South Asia. The yoke of European imperialism has been exchanged for the yoke of the merciless, brutal, national capitalists. We fight for a Socialist Federation of South Asia! Long live the revolution!