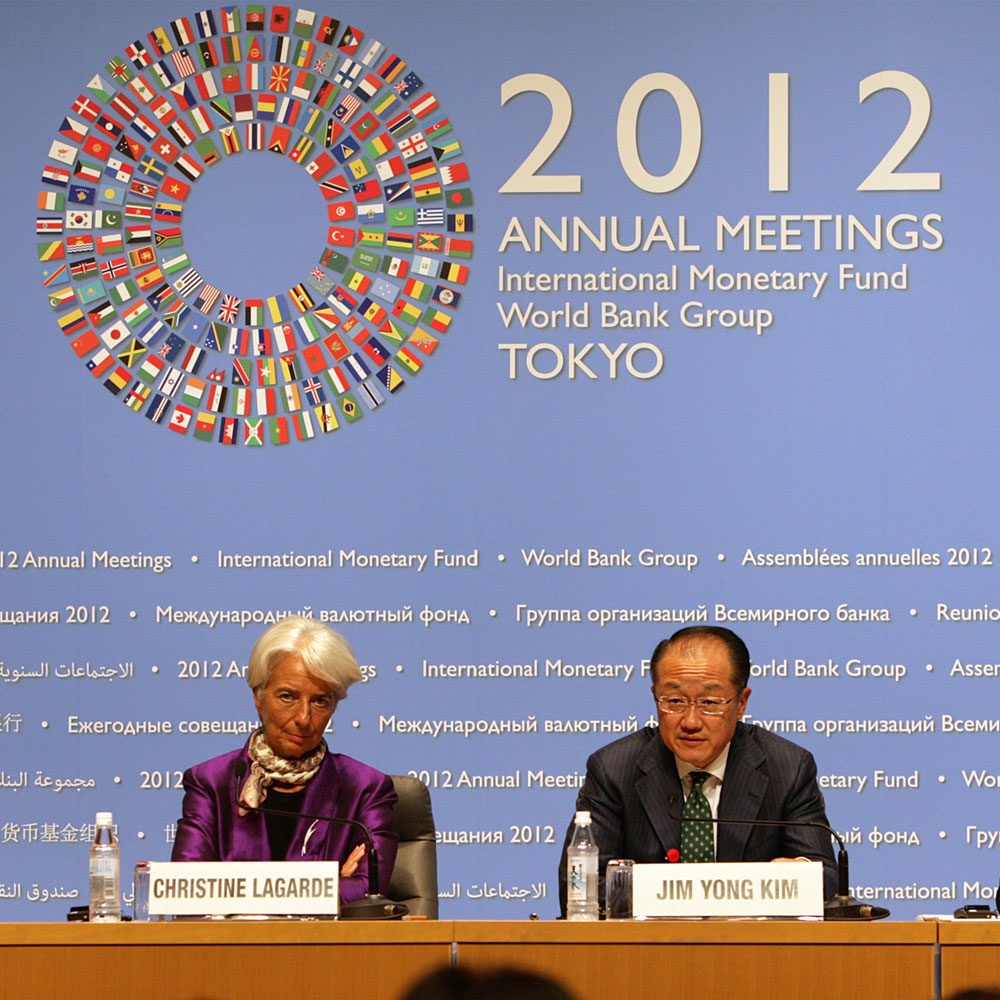 The world economic crisis has led to such a deterioration of the health of public finances worldwide that the recent World Economic Outlook (WEO) of the IMF has the apt title “Coping with High Debt and Sluggish Growth”. One chapter of the WEO is specifically dedicated to analysing examples from the past to see if there are lessons for today1. The results are quite interesting.

During the heyday of the "Washington consensus", the World Bank, the IMF and other imperialist agencies dispatched economic teams to every country that was desperate for money. The recipes were always the same: privatisations, welfare state squeezing, union bashing and so on. The results were often terrible but as these dark-suited guys seemed so convincing and the Berlin Wall had just collapsed, no one dared to object. The IMF had an easy task. From Africa to South America, from Eastern Europe to Central Asia, the same policies were imposed. Globalisation celebrated its triumph. Poverty, malnutrition and curable diseases were celebrated too.

The crisis has shattered all these certainties. Whereas before the crisis the IMF’s one-size-fits-all, anti-worker cure was imposed on every nation, now these gentlemen are completely lost; so lost that they acknowledge it in writing.

The document we are dealing with is an example of this bewilderment. We no longer hear about “a” solution, not even many solutions, but a number of confused ruminations about past episodes of crisis. This is not by chance.

The IMF begins by remembering that “public debt in advanced economies has climbed to its highest level since World War II”. This graph, reported in the document, reveals far more than mere words can. 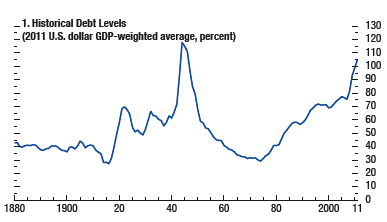 As we can see, if the previous peaks were due to the world wars, since the 1980s debt has been growing apace without a major war and even during strong periods of growth. In other words, debt is now a permanent cancer that affects senile capitalism.

The first nonsense of the IMF analysis is that there is no trace of an explanation for this plague. Where does debt come from? Why is the explosion of debt-to-GDP ratio so widespread? WW2 was an obvious cause of debt as it was the biggest military effort of all time, but now? How can the IMF propose solutions to a problem it does not have an explanation for? The chapter states the following about the debt explosion since the 1980s: “The episodes... during the 1980s and 1990s have their genesis in the breakdown of the Bretton Woods system, when government policy struggled with social issues and the transition to current economic systems”. This is hardly an explanation. First of all, it does not tell us why Bretton Woods collapsed. Secondly, after more than 40 years so many different countries are still in transition? Not exactly an unassailable insight.

In passing, the document deals with the only solution that capitalists have found to reduce the huge public debt: “The largest debt reductions followed the world wars, usually as a result of hyperinflation”. You can’t be a senior economist at the IMF to suspect that hyperinflation can get rid of debt. The problem is that resorting to hyperinflation is like using a flame-thrower to eliminate dust from a house. Such a solution will destroy many other things in the process, even possibly the house itself. Moreover, the grip of finance capital on the world economy is much stronger than in the 1940s, therefore hyperinflation will be used only as the weapon of very last resort.

It is also interesting to note that among the 26 episodes the document deals with, only 3 ended with a default: Germany (1918) and Greece (1888, 1931). The IMF points out that these episodes have little relevance for today. In the case of Greece, this could be true as they were linked to specific national features (the war with Turkey and so on). In the case of Germany, the default was a by-product of the revolution. This is a lesson for today. In a confused political environment, many on the left consider a default as a kind of fetish, something that in and of itself can move forward the class struggle. They confuse the cause with the effects. You do not trigger a revolution with a default. In order to have a default on favourable terms for workers you must have a revolution first.

As part of the “sorry we have no clue approach” of the IMF today, the document explains that debt and economic growth have no direct links: sluggish growth is bad for public finances, of course, but generally speaking growth rates appear unrelated to debt levels. This can be true in the short run. The problem, however, is to explain why since the 1980s public debt is growing everywhere. That is the key issue that bourgeois strategists do not want to address. The crisis has provoked a rapid rise in public debt but as part of a general long term trend of debt growth.

Bourgeois economics has no explanation for this, Marxism has. The question is very simple: capitalism as a whole is less and less productive. As profits come from the unpaid labour of human beings and, in order to compete more effectively, capitalists substitute labour with machines, the more a capitalist economy is developed less profit comes from real production, although other measures such as technical innovation, the cheapening of raw materials relative to finished industrial goods, speed ups and a general increase in levels of exploitation help to reduce the trend. Debts are the result of this simple fact, very well known to classical economists like Smith and Ricardo, and thoroughly explained by Marx. Capitalism is doomed to drown in debt.

The second part of the document deals with six cases of different origins and results. Let's look at some points.

First of all, the IMF underlines the failure of fiscal austerity using the UK 1918 example. Austerity did not work a century ago and will not work now. In the 1920s, the UK economy collapsed and the government was forced to abandon the gold standard and austerity, the document underlines. In other words, the IMF now sides with Keynes. But to no avail as we will see.

Secondly, deregulation is nowadays a bad word. The US 1946 situation is used as a good example of this, as it was a period of “financial repression”, that is a very strict banking regulation, a cap on interest rates and a general mood against financial innovation. However, the economy and public finances were not in such a good shape even in that case. The Korean War was needed to help the US economy grow robustly without inflation. This says it all: ultimately, the crash of 1929 as well as sluggish growth periods in the post-war environment were cured using war. This is a scary conclusion we should not forget.

Discussing the Japan 1997 example the document deals with another important point. It states:

“Monetary policy in this period had a limited effect in stimulating economic activity. Although interest rates were close to zero, no credit or quantitative easing policies were implemented. Furthermore, and more seriously, structural problems in the banking sector remained, and this compromised the transmission of monetary policy to lending conditions”.

Sounds familiar? Fifteen years ago this seemed a situation peculiar to the Japanese economy; now it is the reality in almost every OECD country. As nominal interest rates are close to zero and banks have serious problems, monetary policy, a key pillar in the Keynesian framework, is now ineffective. The other key pillar, fiscal policy, is not exactly in a better situation due to the build up of debt. So what remains of the classical countercyclical tools used when faced with a slump? Absolutely nothing, except cheap talk about “reforms”. That's why centre-left governments (but also right-wing ones) are having a hard time applying Keynesianism to the present situation. Those tools are more and more useless.

The case of Italy in 1992 is very interesting. The IMF considers it basically a success, as the country was able to be admitted in the Euro Club since its inception. But, if we look closely at the matter, after 20 years what has been achieved? Is Italy in a better shape than in 1992? The weight of Italy in the world market has collapsed, its industry has been decimated, workers are paid less and have fewer rights. In a word, the Italian economy never really recovered from 1992. The conclusion is inevitable: sacrifices were huge, but the final outcome was a failure as public debt is at the same level as 20 years ago and the Italian economy is the shadow of what it was back in the 1980s. Moreover, the factor that helped Italy to turn around the situation in 1992 was the exit from the ERM which allowed a strong devaluation of the lira thus giving a spurt to Italian exports. With the Euro this typical trick of devaluation used by Italian capitalists has vanished. After all that, how can anyone seriously propose a new bout of sacrifices using 1992 as an example of success? Unfortunately, the Italian trade union leaders do.

Summing up these experiences, the IMF reiterates that austerity does not work: “The first key lesson is that a supportive monetary environment is a necessary condition for successful fiscal consolidation”, and “fiscal consolidation efforts need to be complemented by measures that support growth”. German finance capital will not be very happy with those conclusions, but the real point is: what kind of measures is the IMF talking about? Large scale public investment is not used as an example for reasons we have discussed before. So what remains? The IMF always pleads the cause of “structural reforms”, that is a labour market without unions, rules, and any other obstacles to exploitation. The problem is that we have just been through decades of such “structural reforms” and the biggest crisis of the last 70 years has ensued. What kind of help can the world economy receive from such “reforms” even from the standpoint of capitalism?

In any case, even the examples presented in the document (arguably the most favourable to the IMF thesis) are not supportive of such conclusions. More generally they are not supportive of any conclusion as we can see from the following: “What is less clear, however, is whether this approach could be applied in today’s economic and financial environment”. To sum up, they don't know where the crisis comes from, they don't know why public debts are soaring everywhere, they cannot say whether past experiences are useful in helping to find a strategy to overcome the crisis and yet they agree on one thing: “structural reform”, that is more misery for the working class, is a good thing.

Leaving aside the complete absence of logic in this approach, the document reveals a sense of confusion, a lack of direction in the mainframe of the economic strategy of capitalism. Lenin stated that one of the conditions for a revolution is a crisis of the regime. The theoretical and ideological desperation this document reveals is not a secondary part of the general crisis of the bourgeois regime.

1. The Good, the Bad, and the Ugly: 100 Years of Dealing with Public Debt Overhangs, International Monetary Fund