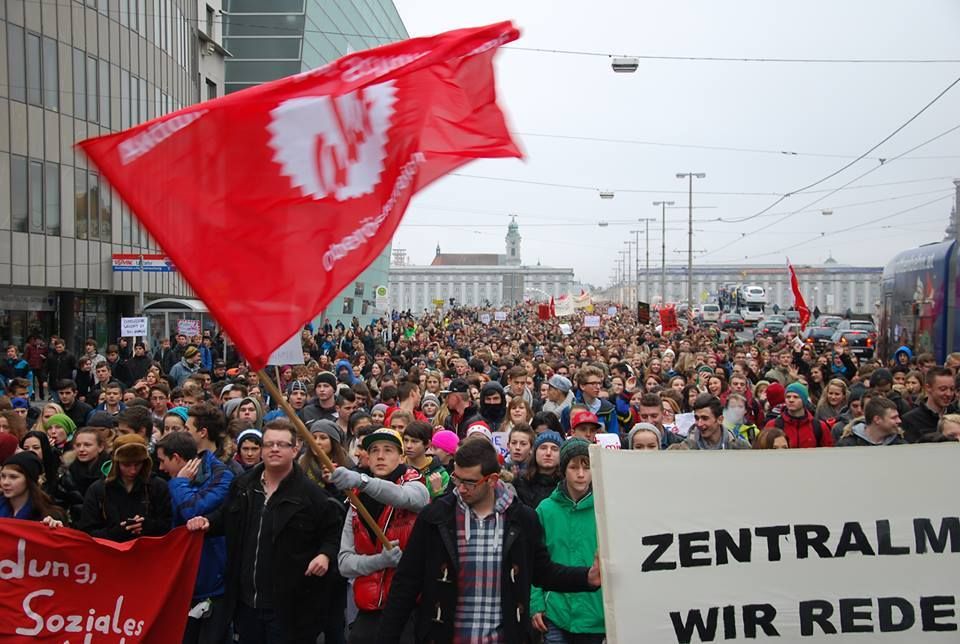 On December 12th thousands of school students all over Austria went on strike. This is the biggest student movement for years. We publish below a report from Rebellion - the Marxist school student organisation in Austria.

The protest movement was triggered by the effects of the new rules for final exams (Matura), which according to the EU-Bologna process have been standardised for all schools. This new so-called Zentralmatura makes it much more difficult to pass the final exams. The students are very angry about the fact that they have not been prepared sufficiently over the last few years for this new exam format. As a result, when the exams were taken this Autumn, many students lost out on the chance to get the results they deserved and it was this that led to a very heated mood in the schools. 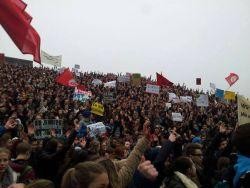 The conservative “School Students Union” (SU), which has a clear majority in the official Federal Students Representation, called for demonstrations and a school strike for the 12th December. But then the SU entered into negotiations with the government, signed an agreement and called off the day of action. However, they also said that they could not publish the agreement immediately but would wait three days before doing so. On Monday they finally presented the “compromise”. All the media reports claimed that the demands of the students had been met and that there would be no strike. This of course had a very demobilising and confusing effect on students. However, throughout the course of the day an increasing number of students made use of social networking websites to declare that this compromise is a farce and will not change anything. In the end a girl took the initiative to call for the strike to go ahead in Vienna on the 12th December. All the left-wing and student organisations then followed her example and supported the strike. Spontaneously in other towns around the country school students who did not have any official organisational structures mobilised for their own demonstrations.

In Vorarlberg the mobilisation for the strike was organised from the beginning by the Marxist-led Socialist Youth (SJ). This meant that the manoeuvring of the SU could not have the same disruptive effect as it had in other regions because the movement was much better organised and democratically run with the direct involvement of the students in the schools.

Surprisingly the AKS (the Social Democratic students organisation) also joined the protest. One week ago they were still arguing against the strike and backed nothing more than reforming the new final exam system. However, the mood against the conservative SU (which everybody now calls the “scab union”) is so heated that the AKS saw a chance to swing the balance of forces within the official structures of school student representation in their favour. They used their organisational apparatus to extend the protests and within one day they had called for strikes in Linz, Innsbruck and Klagenfurt.

Video from demo in Linz

Due to the open betrayal of the conservative SU there was not a lot of time to organise this protest. Organisers and activists also had to contend with the fact that the media did not report the new call for strikes, the SU and school headmasters spread disinformation about the strike and there was open repression in many schools against students planning to join the action. Outside of the SJ in Vorarlberg no organisation was really organising the mobilisation. As a result the protests yesterday had a very spontaneous character. 5000 in Vienna, 8000 in Linz, 2000 in Vorarlberg (plus 1500 teachers who are also in a struggle against wage cuts and longer working hours), 1000 in Salzburg, 2000 in Innsbruck and 500 in Klagenfurt gives a very impressive picture of the mood among the school students. Not only were they big but the demos were very explosive. In Klagenfurt the police even dissolved the demo because the “mood was so aggressive” as the students marched to the regional parliament. In Vienna fruits and tins were thrown against the Bundeskanzleramt, the office of the chancellor.

At the end of the demo in Vienna delegates from the demo were invited for talks to the Ministry of Education. This alone represents quite a success for the protests. But the government officials said that they would only negotiate with official students representation despite the fact that these official "representatives" have been completely discredited. The Marxists explained that the next step should be the holding of conferences for the activists where delegates for the negotiations should be elected and a clear programme should be discussed. This idea has been taken up in Vienna where delegates will be elected in the schools. In several other towns the idea is spreading to organise similar conferences.

On Monday the next round of talks with the Ministry will take place. The results of these negotiations should be made public. If no results can be achieved (which is the most probable outcome) then we need another strike. The strike plenary in Vorarlberg has already issued a call for another strike next week.

Next week the new government, which stands for a programme of austerity, privatisations and counter-reforms, will be sworn in. On Monday the teachers will hold demonstrations against the attacks on their rights and conditions (which will have severe consequences for the students also). On Tuesday this counter-reform will be voted on in parliament. On Wednesday the public sector workers' unions will stage a national demo in Vienna to demand wage increases after two years of a wage freeze. The Marxists argue that the school students have to link up with these struggles under the slogan “Fund education not the banks”. The call for a joint struggle of students and teachers by the speaker of the SJ Vorarlberg was met with “frenetic applause”, as a bourgeois newspaper wrote.

The mood is there to continue this protest in a much more effective and democratically organised way and with a clear political perspective. This struggle can be won and this could be the starting point for a bigger movement for progressive reform of the education system. No doubt that this would have an important effect on those elements in the labour movement who are fed up with the policy of the Social Democratic leadership and see the need to prepare for the coming attacks on their living standards.