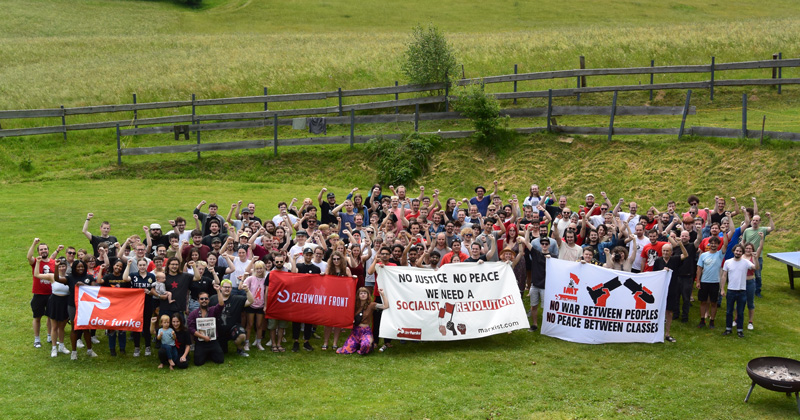 Over the last weekend, from 3-6 June, what everyone attending agreed was “the best Pfingst Seminar ever”,  was held in an idyllic spot in Upper Austria. With over 170 participants, it was the biggest seminar the Austrian section of the International Marxist Tendency (IMT) has ever organised.

For many, it was their first time attending such an internationalist event and meeting comrades from all over Austria, as well as from other countries. Twenty-four comrades from Germany, Switzerland, Poland, Czech Republic, Slovakia, Yugoslavia, Hungary and Britain gave the weekend a truly internationalist spirit and everyone was eager to discuss the world situation, and the experiences of comrades from different countries.

The seminar started with a world perspectives discussion in which Niklas Albin Svensson from Britain highlighted the period we live in: one of mounting contradictions, wars, crises and inflation. This is leading to an increasing radicalisation and questioning of the capitalist system by workers and youth, as comrades reported in their contributions. While the reformist workers’ leaders live in the past, we must focus our energy on building a truly revolutionary organisation.

Everyone agreed that they learned a lot from the workshops and discussions that were held on Saturday afternoon and Sunday. There were 14 workshops altogether on topics such as “The Organic Crisis of Capitalism”, “The National Question in the Balkans”, “Marxism and Music”, “Imperialism Today”, “Russia 1917: War & Revolution”, “LGBT: Liberation and Revolution”, “Planned Economy vs. Green Capitalism”, “Dialectics of Nature”, and many more.

On Saturday evening, we launched the German edition of Alan Wood’s book “History of Philosophy: A Marxist Perspective”. Willy Hämmerle explained that the history of ideas is not a mere accumulation of facts, but that this book brings forth the laws of historical development. “This book is the ticket for the train of philosophy”, he said, and added: “The revolution will be a thorough ticket inspector and show no mercy to fare dodgers – those who truly try to grasp the method of Marxism will pass!”

As always, the seminar was completely self-organised and self-financed. All participants helped with cooking and cleaning, and made contributions in the various discussions. The seriousness and determination to build the revolutionary forces was palpable and everyone did their part to make the event a collective success.

Besides the political programme, comrades engaged in a fierce battle on the football pitch for the title of “FuFuTu” (Funke Football Tournament) champion, played badminton and table tennis or went for a swim in the nearby lake. The last night ended with an energetic session of singing workers’ songs and a party, where the stormy and rainy weather did nothing to deter the optimistic mood.

The enormous enthusiasm was shown in our financial collection, in which over €70,000 were given in pledges in order to finance new offices: one for the International in London, as well as one in Austria. This will be a big step up to the next level of building the revolutionary forces.

Brimming with renewed motivation, we will now redouble our efforts to win over to the IMT all those who want to overthrow capitalism and build socialism in our lifetime!