The left wing of the Austrian SPÖ (Social Democratic Party) is starting to gather strength, as a recent national gathering held in Linz has revealed. Shop stewards, party activists and young socialists who want to see a clear turn to the left within the party met to discuss the way forward and the programme they wish to see adopted by the party. The Marxists of Der Funke intervened and have important positions within this movement. 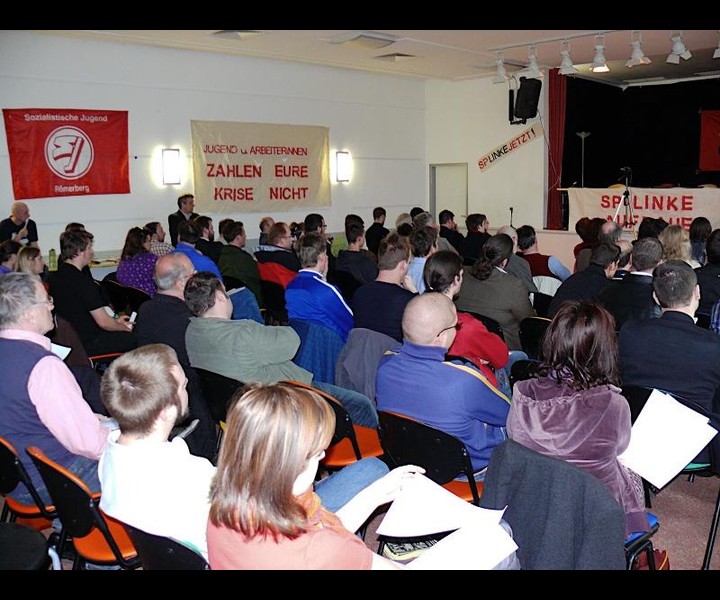 On Saturday, 10th April, the SPÖ-Left (www.spoe-linke.at) held its first national conference with 120 comrades from all over Austria present. This represented a big step forward in the building of a strong left wing in the Austrian labour movement.

In the last months the Social Democratic Party (SPÖ) has suffered a series of severe election defeats on a regional and local level. The root cause of this deep crisis can be found in the role of the party leadership in government. Party leader and Chancellor Werner Faymann has been openly supporting a policy of co-managing the economic crisis along the lines dictated by the big capitalist banks. He is leading a coalition government with the conservative People’s Party (ÖVP) without having implemented one single social-democratic demand. Meanwhile, the discussion over the question of how to consolidate the public budget in the next years has started.

The ÖVP is in favour of a policy mix of severe cuts in welfare spending combined with an increase in taxes on fuel and energy in the name of “ecology”. In reality the conservatives want to make the working class pay for the crisis. The leadership of the SPÖ so far has shown no intention of countering this capitalist offensive. On the contrary, Faymann is strictly opposed to doing anything that might provoke the conservatives such as putting forward a political alternative to these plans. Nevertheless, the majority within the party, the trade unions and the socialist youth organisations is demanding a policy of taxing the rich and making them pay for the crisis they have caused.

Against this background in the last months several attempts have been made to bring together all those within the Social Democracy who wish to see a left-wing change of policy. The regional party leadership in the industrial heartland of Upper Austria started an internal discussion process very critical towards the official line of the national party leadership. The Socialist Youth, traditionally an important force within the social-democratic left wing, called for the organisation of a left-wing “think tank” with public meetings all over Austria. Both initiatives have the aim of discussing ideas and convincing the majority of the party tops to change course. For many rank and file activists, however, this is not enough. Many left-wing social-democrats have come to the conclusion that we need an organised left wing to build up pressure within the party that is capable of leading a political struggle against the counter-reformist party leadership.

The SPÖ-Linke (SP-Left) is the first nucleus of such an organised left wing and started its activities last autumn. Several prominent social democrats (among them ex-Minister of Social Affairs, Erwin Buchinger) came out in favour of this initiative calling for a “left-wing SPÖ”. The bourgeois mass media has shown a lot of interest in the SPÖ-Linke and this has attracted a lot of people to this project. In the meantime the SPÖ-Left has supporters in 8 out of 9 regions.

The Marxists of “Der Funke”, playing a central role in this project from the first day, have put forward the idea of bringing together all these comrades at a national meeting. This finally took place on 10th April in Linz. 120 people from all over the country attended this conference, among them shop stewards and trade union activists, party activists, young socialists and representatives of different social-democratic front organisations. Many were young comrades, but there were also long standing social democrats with decades of party membership. Every last place in the hall was full. Considering that on the very same day there were also a series of important meetings of the labour movement taking place this figure of attendance has to be seen as a big success. This in itself shows that the SPÖ-Left is on the way to becoming a viable tendency within the Austrian labour movement.

The meeting was opened by a speech by David Stockinger, a well-known youth and party activist from Lower Austria. He explained the task of the SPÖ-Left by quoting Josef Hindels, a left-wing icon of the movement, in putting forward a political, socialist alternative to capitalism which is revealing itself incapable of solving the problems of humanity. David read out some of the many solidarity messages we have received from comrades who could not attend the meeting. Among them were letters of whole party branches, regional assembly members (regional MPs) and high ranking party leaders like Michael Ritsch, chairman of the regional party in Vorarlberg, or Kurt Flecker from Styria.

Then Rudi Fußi, founder of the SPÖ-Left and well-known activist against the acquisition of interceptor planes by the Austrian air force, delivered a speech to the meeting explaining the political programme of the SPÖ-Left. He made it clear that the central question in the coming period is whether it is the working class or the bosses and banks who have to pay for the cost of the crisis. He openly attacked the ÖVP for its plans but he also criticised the SPÖ leaders for not being capable of fighting the conservatives. After this speech many comrades intervened in the very lively debate.

After the break the programme of the SPÖ-Left, which has a clear anti-capitalist perspective, was discussed and voted on. Furthermore a list of demands was discussed on how to consolidate the budget and how to make the bosses and the super-rich pay for the crisis. Around this programme the SPÖ-Left will start a campaign within the SPÖ up to the coming party congress in June. On Mayday and in several regional congresses we will be present with this programme putting forward a clear alternative to the party leadership’s subordination to the capitalists.

Then Gernot Trausmuth, Editor of the Marxist paper “Der Funke” and one of the organisers of this meeting, held a speech on the methods we need to build the SPÖ-Left in the coming period. He put a lot of emphasize on the need for the SPÖ-Left to be more than a discussion club and that it has to show in practice that its ideas are the base for rebuilding the labour movement. He stressed the idea that the SPÖ-Left has to give a voice to the workers in struggle and that it has to reclaim the party to transform it into an instrument for the coming class struggles.

In several workshops the future work of the SPÖ-Left was discussed more in detail. It was made clear that the SPÖ-Left has to play a decisive role in organising resistance against the coming cuts and tax increases, that it has to build roots in the trade unions and that it has to fight for democratic rights within the SPÖ. In the plenary debate there was a lively discussion on the question of a “worker’s wage for SPÖ officials”. In the end a clear majority was in favour of this demand.

At the end of the meeting a team of speakers was elected. In the future 10 comrades will be in charge of implementing the decisions of this conference and to organise the building of the SPÖ-Left. Among them are well-known shop stewards and trade unionists and leaders of the Socialist Youth. With Gernot Trausmuth, Lukas Riepler (chairman of the Vorarlberg Socialist Youth) and Martin Wieland (a trade union activist and hospital worker from Linz) the Marxist tendency has three comrades in this body.

Those who attended the conference were keen to take the ideas discussed in Linz to their party branches, trade union organisations, etc. The group of comrades who actively support the SPÖ-Left will now increase considerably. Already a series of comrades who could not participate have said that the results of the conference are very promising and there are big possibilities to organise the left wing now also in new areas of the country.

This meeting was definitely an important step forward in building a strong organised left wing. The Marxists will do their best to contribute to this process and argue within it for the ideas of revolutionary socialism.