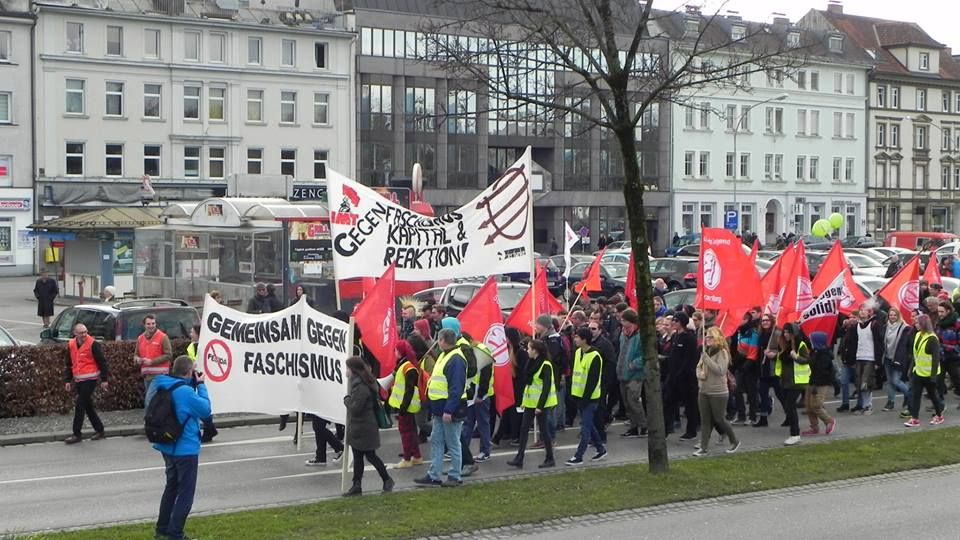 On the 22 March the racist, far right group Pegida (Patriotic Europeans Against the Islamisation of the West) tried to march in Bregenz/Vorarlberg in Austria. The following is a report of the counter-demonstration.

Pegida, which originates in Dresden, Germany, has spread to some German towns and cities, but it has not established real roots throughout the country. While the marches in Dresden have drawn thousands, in other cities only hundreds or only dozens have turned out and in most cases the demonstrations of the Left have been bigger or much bigger than Pegida’s. Nonetheless, they have even sought to hold demonstrations outside Germany in the last few weeks. In Austria, Perigda have tried to hold three demonstrations before the 22 March: one in Vienna and two in Linz. In these cases the counter-demonstrations were much bigger than Pegida’s itself. Those participating in Perigda’s demonstrations were mainly the extreme right wing, open Neo-Nazis and some other lunatics. In these circumstances Pegida announced their intent to hold their first demonstration in Vorarlberg.

Politically, the region of Vorarlberg is a quiet place with less than 400.000 inhabitants. The Left is very weak, the support for the Social Democracy was reduced to 8.8% in the last local elections and no party to the left of it exists. But despite these adverse conditions, the Marxists of the IMT have built strong roots in this region.

As soon as Pegida announced their march, we started to organise a counter-demonstration. Pegida’s first plan was to march through Bregenz after their rally. So we announced our determination to block the march. Our Slogan was: “Pegida isn´t allowed to move a metre!” From the beginning we took the initiative to form a broad alliance of left forces to organise the counter-demonstration. The alliance consisted of the Marxist-led Socialist Youth with “Der FunkeMixed element/text selection”, a variety of left-wing organisations (most but not all of them from the Turkish and Kurdish left) as well as the majority of the teachers’ unions. When the success of our mobilisation became apparent, even the Greens and the Social Democrats were compelled to participate.

This level of opposition was clearly not expected by Pegida, which had hoped for a quiet reception in this most conservative region of Austria. Their leadership’s first reaction was to panic and to call off their march. But their far-right base support was angry with that decision and so, to prevent further damage to their credibility, Pegida replaced their leader in Vorarlberg and called again for a rally but without a march.

With this initial victory in mind we launched our main counter-mobilisation. During the 3 weeks or so before the demonstration, we gave out more than 15,000 leaflets at schools and factories, at cultural events,  and at train stations, holding street stalls on the weekends. We also produced and sold a pamphlet explaining the fight against Pegida and Fascism from a Marxist point of view. The reception was extremely positive. Many people were shocked that the far right wanted to march in Vorarlberg. Many took leaflets to distribute themselves and more agreed to come to the demonstration. 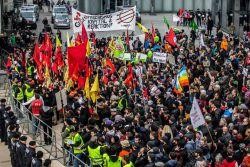 The bourgeoisie on the other hand tried to frighten both sides into not coming to the demonstrations: The conservative mayor of Bregenz stated that he condemned not only Pegida, but also the counter-demonstration. At present, the Austrian capitalists don’t need the Fascist mob in the streets, but they also don't want them totally smashed by a big opposition movement which would strengthen the Left. The right wing media especially laid heavy stress on the fact that for Vorarlberg this was the “biggest police mission ever” or “in decades” (400 police were mobilised), that there would be a policy of “zero tolerance”, that the restaurant owners at the location of the demonstration were not happy (one of them is a city councilor for the conservative ÖVP) and so on. Clearly, they hoped for a failure for both sides.

In the end, it was a huge success for us and a crushing defeat for Pegida. 1000 people came to our demonstration and the mood was electric. A big block of energetic and loud school-students and young workers led the demonstration under the banners of the IMT, Der Funke and Socialist Youth. After the youth came an equally large  block of comrades from the Turkish and Kurdish left followed by the rest of the demonstration. The slogans were against Fascism and Pegida (“Whether East or West, down with the Nazi-plague”, “Down with Pegida”), but also slogans from the broader workers’ movement and against the capitalist system (“Long live International Solidarity”, “One solution: Revolution”). At the final rally, there were slogans against Fascism, workers’ songs, and Turkish and Kurdish people Halay dancing. Tea and coffee as well as cake and pide were sold to finance the counter-demonstration. We managed to sell almost 100 copies of Die Funke and many books and pamphlets were also sold. The mood on the whole demonstration was one of pride, joy and determination: Here were the anti-Fascists in Vorarlberg, showing our strength! 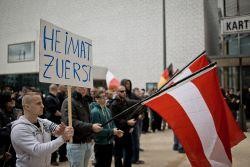 Pegida managed to get 70 people only on their demonstration, many of them bussed in from the hometowns of the “guest speakers”, which were the only speakers as no-one from Vorarlberg was allowed to speak after the mess they had created in the weeks before the demonstration! They tried to compensate for their lack of numbers with tried and tested Fascist methods. Long before the start of the counter-demonstration, some Nazis who later were at the Pegida rally, came by car to the assembly point. One of them attacked  five comrades, who were already there, with a baton. While our counter-demonstration assembled, another Nazi came to take detailed photos of our comrades to put them on Facebook later. After the demonstration, a provocateur, most likely a right winger, tried to cause trouble and when he was arrested by the police, they found a knife, stones and a Molotov Cocktail in his pockets.

All in all, our demonstration was a huge success. The police may have claimed that day as its biggest mission in decades; for us it was the biggest anti-fascist mobilization since the Second World War in Vorarlberg!