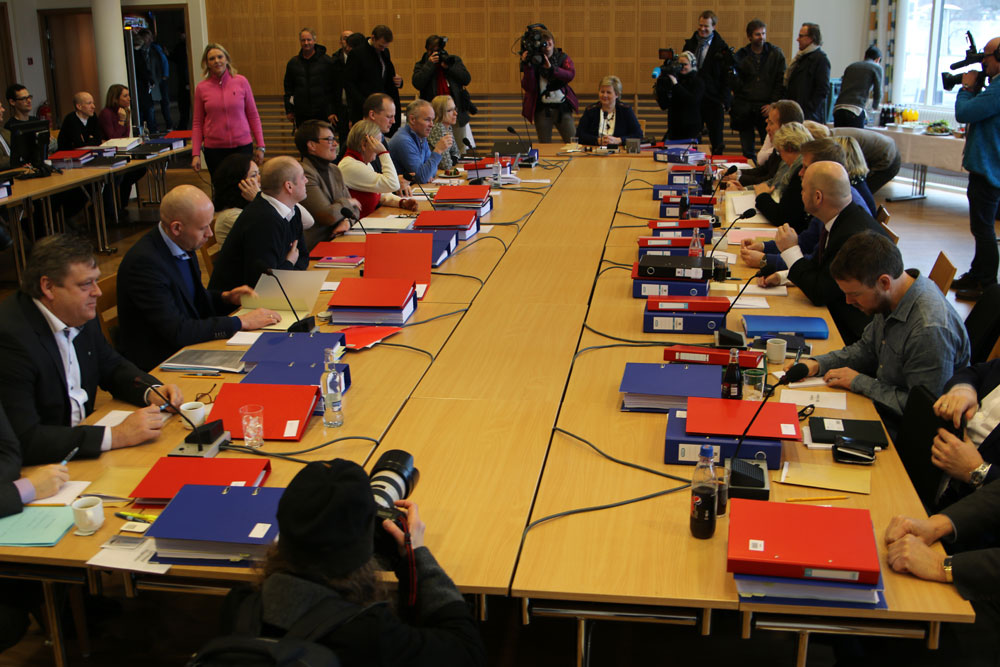 The Norwegian working class got a rude shock this autumn. The right-wing government has brought austerity to Norway, following their counterparts in the rest of Europe. It is clear that even living in the one of the richest countries on the planet will not save you from the crisis of Capitalism.

This autumn’s proposals by the right-wing government in October are nothing short of a declaration of war on the trade union movement and the working class.

The budget contains cuts to child benefit for 22,000 disabled parents with 7,000 NOK (€745). People on disability benefit will also see their benefits subject to tax. The government also cuts funding for universities with 80m NOK and suggests introducing tuition fees for students from outside the EU to pay for it. Wealth tax is cut from 1% to 0.75% and the tax-free allowance is raised from 1 million to 1.2 million NOK. Tax on top earners is also cut. The budget is a clear attack on the weakest in society while giving tax relief to the rich.

At the same time, the government is attacking workplace rights. The working day and overtime can now be legally to increase by several hours, temporary contracts are legalised up to a year and agency staff will now no longer have to have the same working conditions as permanent staff in companies.

This is a clear attempt to make the labour market more “flexible”, I.e. making it easier to hire and fire workers and force them to work longer hours. This is all in the name of flexibility and productivity but really what the Norwegian bourgeois is looking to is to increase their profits at the expense of the working class.

The workers fight back

It is worth noting that the far-right Progress Party (Fremskrittspartiet), which at one point in 2009 reached 30% in the polls, has been thoroughly discredited. Their support now stands at 10%, down from 16% two months ago. Their collapse mirrors that of the conservative Right Party (Høyre) which is down to 22% from 40% in January 2013. The right-wing is taking a massive hit for their unpopular programme.

Now, they provoked the trade union movement. The unions are on the warpath against the temporary contracts. A two-hour general strike has been declared for January, which is a big step forward. This follows strikes in airports and schools over the past year.

The special crisis of Norwegian capitalism

As we explained after the last election, the bourgeoisie made sure to get a thoroughly right-wing government elected in order to begin to attack the rights of the workers. Outside the oil and gas industry, high wages and good working conditions are making Norwegian industry uncompetitive. When the world market is shrinking, Norwegian capital can no longer afford the reforms of the past. We have dealt with the Norwegian dilemma of increasing dependence on oil and loss of competitiveness in depth in 2011 and again after the last elections. We explained how the bourgeoisie was preparing an attack on the working class.

Since then, the situation has gotten worse for the oil industry as oil prices are collapsing. Although this has led to a fall in the Norwegian currency, it is far from sufficient to solve the problems of Norwegian industry.

“Directors emphasized the importance of further structural reforms to improve productivity and competitiveness, and to promote the non-oil economy, and they looked forward to the report of the Productivity Commission. Priorities include further reforms of the labor market, pensions and public services, greater wage differentiation across sectors, and reducing protection and subsidies in agriculture.” (IMF Executive Board Concludes 2014 Article IV Consultation with Norway)

It is clear that this is the line which the Norwegian government and bourgeois are pursuing. When the recently commissioned “productivity commission” delivers its report, it will without a doubt propose even further attacks.

The end of the welfare state

Norway is one of the richest countries on the planet. The only country with a higher GDP per capita is Luxembourg. Yet, the bourgeoisie is determined to claw back its profits. The Norwegian workers are learning the hard way what Capitalism means in the 21st century, just like their counterparts in the rest of Europe. The fiction of “Capitalism with a human face” can no longer be maintained even in the richest of countries.

The workers' organisations would do well to remember this. If they continue to attempt to prop up Capitalism they will be punished severely. In spite of the rise of the Labour Party, the Socialist Left Party (“Sosialistisk Venstreparti”) remains below 4% after having joined the last left-centre government. They are down from something like 8-9% in 2008-9. Rodt, which is tentatively rising in the opinion polls would do well to learn this lesson. What we need is not more compromise with the right-wing, or the water-down of our programme, but militant action and a socialist programme.

The calling of a general strike of the LO trade unions is completely correct and necessary. However, the government will not back down. In Greece and in Spain, as well as Britain and France, strike after strike have not brought a change in policy. Further action will be required after the January strike and the movement should prepare itself for this. The Norwegian unions are strong and if they mobilise with determination they can force the government to back down.

In this period such a victory would be short lived. The only way out, in the long-run, is a fight to transform society on socialist lines. The welfare state in Norway achieved much for the working class but it stopped short of a decisive transfer of power from the bourgeois to the workers. Capitalism remained. Now we can begin to see the consequences.