Details
In Defence of Marxism
26 November 2019 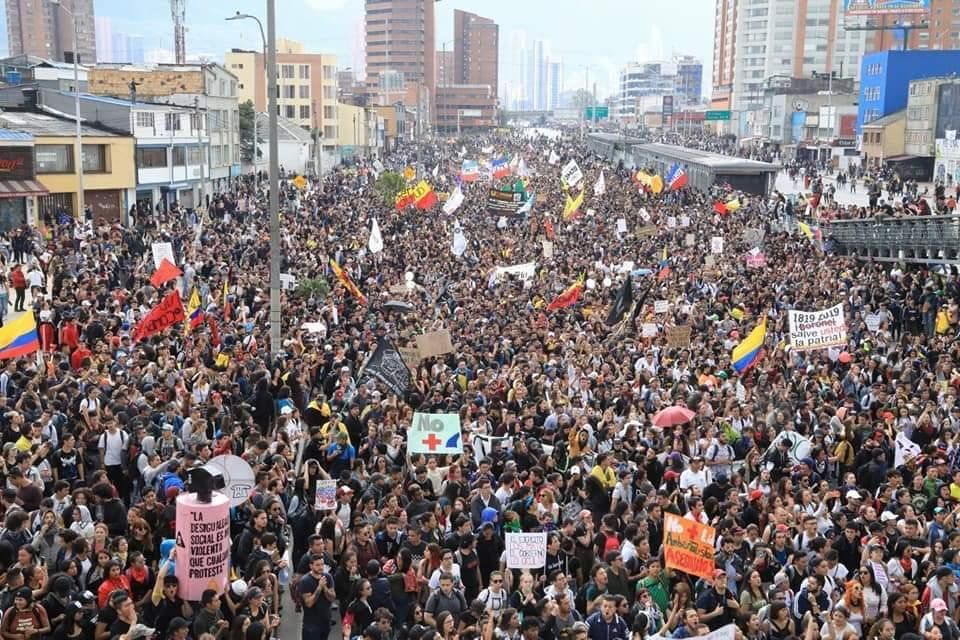 In his latest podcast (recorded 25 November), Jorge Martin provides an update on the recent strike in Colombia, the month-long uprising in Chile, and the struggle against the coup in Bolivia.

On 21 November, a national strike was called by Colombian trade unions, students, peasants and indigenous organisations in opposition to a package of counter reforms by the reactionary Duque government. The movement was also sparked by a scandal in which the government bombed what it claimed was guerrilla camp, killing a number of young miners.

This was the biggest strike in Colombia since the 1970s. Despite vicious police repression, curfews and militarisation of the streets – especially in Bogota and Cali – the movement is holding strong. There have been cacerolazo protests (banging of pots and pans) up and down the country – even in Medellín, which was considered to be a right-wing stronghold – defiance of the curfews, and a spontaneous strike on 22 November.

That a country like Colombia (traditionally seen as very right wing) is starting to the join wave of uprisings in Latin America is highly significant.

The uprising in Chile, which started on 18 October, shows no sign of abating. The government tried to make concessions, signing a deal with all parties (with the exception of the Communist Party) to establish a “Constituent Convention”, to draft a new constitution.

However, this fake concession actually aims to kick the can down the road: with a referendum in April next year to decide if the Convention should be convened, elections in October 2020 and a final ratification in October 2021. Moreover, all decisions of the convention will require a two-thirds majority, which would give a right-wing minority the power of veto.

The movement rightly rejected this deal, and has responded with three days of escalating strike action, starting with dockers yesterday and then a full general strike today and tomorrow. As in Colombia, the government has responded with brutal repression, but the masses are losing their fear of the Carabineros.

Despite massive popular support for the movement, the trade unions and social organisations have not advanced the objective of overthrowing Pinera, focusing their demands on a “real Constituent Assembly” and a new Constitution.

But such an assembly would only be a bourgeois parliament, and a new constitution wouldn’t solve the problems facing workers, youth, the indigenous people and so on. These social ills are not caused by the Pinochet constitution, but by capitalism itself. The whole system must be overthrown, and the new bodies that have risen out of the movement (the territorial assemblies, open councils etc.) must be coordinated for the seizure of power.

Finally, in Bolivia, on 10-11 November, a coup forced President Evo Morales to resign, following a police mutiny and the intervention of the Army High Command. He has now found asylum in Mexico.

Resistance against this coup has been met with massacres in Sacaba and in El Alto, where the armed forces cleared out by force the blockade of the Senkata gas plant, killing 10 people. Protests against the coup and the killings have been limited to areas traditionally more loyal to Morales, in El Alto and also the Chapare, where the Coca farmers are based. They have not spread to the core of the workers’ movement.

On the weekend, the coup government of Jeanine Áñez was legitimised by the senate and chamber of deputies, which approved a new law for the convening of elections, with the full participation of Morales’ MAS having a two-thirds majority in both chambers. Furthermore, two meetings between the coup government and the main leaders of the workers and peasant organisations, one national and another one in Cochabamba led to further agreements to recognise the coup government in exchange for minor concessions. These are betrayals that have contributed to disarming the resistance to the coup.

A balance sheet of the limitations of Morales is desperately needed, along with a revolutionary struggle against the illegitimate coup government.

These insurrections in Latin America are part of a bigger process unfolding all over the world. A new wave of world revolution has broken out on the eve of a new recession of world capitalism – and has totally debunked the claims of so-called left-wing academics that a conservative wave was sweeping Latin America. In truth, the continent is in revolt, and more upheavals will follow in the next period.