Hear this recording from a public meeting held by Edinburgh supporters of Socialist Appeal on the ongoing economic crisis effecting millions of workers and poor people across the globe. Speaking were Fred Weston, editorial board of the website In Defence of Marxism, and Bayo Ogunrotifa of the Nigerian Marxists Campaign for a Workers Alternative. 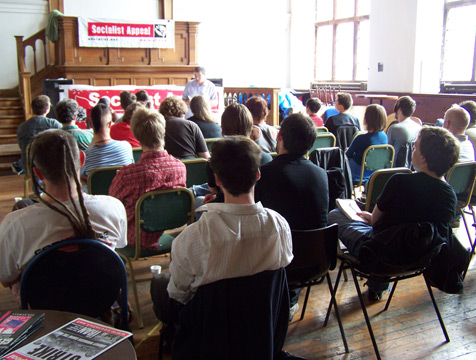 Fred Weston speaks to the Edinburgh meeting on the crisis in the world economy At three thirty on Saturday the 4th of July supporters of Socialist Appeal in Edinburgh and from a round the country met up at the Forest Cafe. The agenda for the talks was the economic crisis. The Speakers at this meeting were Fred Weston, the editor of the popular Marxist website In Defence Of Marxism and Bayo Ogunrotifa, a Nigerian Marxist from the group Campaign for a Workers Alternative, currently studying in Britain. 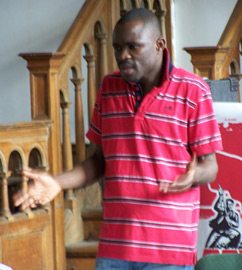 Bayo Ogunrotifa speaks on the crisis in Africa Around 30 people had come to the meeting from all over the country. Fred Weston's lead off on the economic crisis was interesting and informative covering how the economic crisis has come about. He later went on to speak of how the working class have been affected by the Economic crisis and how they are fighting back against the attacks of the Capitalist class against the workers of Britain and the World.

Bayo Ogunrotifa spoke about how the economic crisis has been affecting the workers and poor of Africa. He also spoke of the need to get rid of the Capitalist system and begin the process of building Socialism in Africa.

Overall the meeting was successful and some good discussions were held after the meeting. The total funds raised after all the costs of arranging the meeting had been met were around 50 pounds, which was donated to the development of the In Defence of Marxism website.

Lead off by Fred Weston

Lead off by Bayo Ogunrotifa

Sum up by Bayo Ogunrotifa

Sum up by Fred Weston