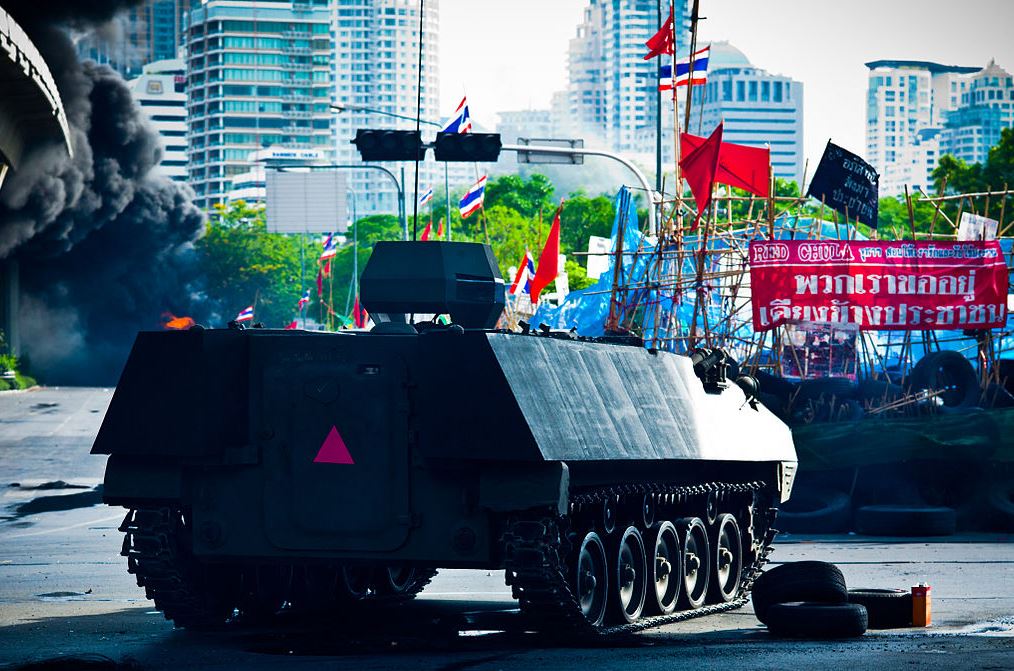 Following the declaration of martial law in Thailand on Tuesday May 20, the army has today carried through a full coup d’état and removed what remained of the elected Pheu Thai party from power. This is the 12th coup in Thailand since 1932.

[For a full analysis of the events leading up to the coup Read: Coup and crisis in Thailand - Red Shirts must strike back.]

Thailand's military has seized control of the country and suspended the constitution - except for the parts regarding the reactionary monarchy.

While the head of the army, General Prayuth Chan-ocha, did not use the word "coup" in his televised statement, he said the takeover was necessary "in order for the country to return to normality quickly". He added that the army, armed forces, air force and police would seize power as of 4.30pm local time on Thursday and would help "reform the political structure, the economy and society".

Prayuth cited a 1914 law - when Thailand was not a democracy, but an absolutist monarchy - giving the army the right to step in during crises. He said the military was acting to prevent chaos and clashes between rivals, and that it would "bring back peace and order to the beloved country of every Thai as soon as possible."

"Don't worry," he added, "Everything will still go on normally. (We) will try not to violate human rights — too much."

In is clear though that the army is not stepping in to stabilise the country, but to force the will of the small minority of rich and powerful rulers of the country with an iron fist. Over the past period the ruling class has ignored all the democratic laws of the country. Only last week they removed the democratically elected Prime Minister who, as opposed to the hated opposition, had widespread backing within the population, especially amongst the poor peasants.

“Despite the fear the memory of [the Red Shirt demonstrations of 2010] inspires in the ruling class, the economic crisis will force it to act against the workers and peasants soon enough.”

This coup represents the intervention of the military to defend the Thai bourgeoisie against continuing political and economic instability. The ousted government was the embodiment of the hopes of the rural peasant population thanks to its progressive measures such as subsidies for rice farmers. By removing it, the military is decisively siding with the urban, petty-bourgeois, and monarchist Yellow Shirt protesters who describe the Pheu Thai party’s measures to help the rural poor as “negligent” – which from the point of view of the bourgeoisie, they are.

Thailand’s economy, already in a fragile state ever since the 2009/10 crisis, has been deteriorating since November 2013 as this political crisis has paralysed the government. The economy shrank 2.1% in the first quarter of 2014 and this last week has seen things get even worse for the Thai bourgeoisie, with the bhat falling against the dollar and the stock market falling by 1.13% on Tuesday. In this context, the ruling class has been left with little choice but to use the military to restore stability for the bourgeoisie.

They have been egged on in this respect by the representatives of international capital. Andrew Colquhoun, Head of Asia-Pacific Sovereigns at credit rating agency Fitch, said on Tuesday that military control was not necessarily negative for Thailand’s debt and might help break the political deadlock. He went on to say that "the key factors for the ratings are whether Thailand can avert more serious and bloody political disorder, and whether we see a return to a fully functioning government that is able to make policy and pass a budget for the next fiscal year." In other words, from the bourgeois point of view all that matters is the defence of capitalism, even at the cost of democracy.

The favourable attitude of the bourgeoisie towards a coup is also summed up by the reaction of Dr Liam McCarthy, a South East Asia “expert” at Nottingham Trent University in Britain, who said that while “military intervention always appears unpalatable... the current political climate raises the possibility of an equally unpalatable alternative".

What is this unpalatable alternative that is apparently threatening Thailand’s credit ratings and that has provoked the military to intervene after months of it refusing to do so? The answer is the Red Shirts. The pro-government supporters, mainly made up of peasants, who have been rallying in a protest camp 40km from the centre of Bangkok proved their revolutionary potential in 2010 and the bourgeoisie fear that they are on the brink of doing so again.

These are the most oppressed layers of Thai society who see in the now-ousted government the only politicians who have ever acted in their interests. They have had a taste of what it is like to have the state acting for you rather than against you. They have also had a taste of their own strength when, in 2010, they occupied parts of Bangkok as part of enormous protests against the monarchist ruling party, forcing elections in 2011 that brought the Pheu Thai party to power. In short, the mass of the rural population are increasingly conscious of what they don’t want, what they do want, and how to fight for it. This growing consciousness is what has rattled the ruling class.

The Red Shirts have been rallying their forces since Yingluck Sinawatra’s ousting as Prime Minister by judicial coup last week. It is their potential power that has stayed the hand of the ruling class up until now, for fear of the response they might provoke. However, having successfully removed half of the government via judicial coup without provoking too much of a reaction, the ruling class now feel strong enough to attempt a full-scale military coup against what remains of the Red Shirt party. This contains a certain element of risk for the military, who are still concerned about the reaction this could spark among the Red Shirts, evidenced by the fact that one of the first acts of the military in power has been to disband the Red Shirt protest camp on the outskirts of the capital.

The ruling class has staggered the coup over a period of time - beginning with judicial action, followed by the imposition of martial law, and completed with a full military takeover. For this protracted method to work the ruling class has been reliant on the inaction of Yingluck and the leaders of the Red Shirt movement who are equally terrified of the power of the rank and file peasant movement. By refusing to call them to the defence of the government in any serious way, the Red Shirt leaders are serving to demoralise the rural poor who make up the ranks of the Red Shirts and who are being forced to watch their elected government gradually handing power back to the reactionary ruling class without putting up a fight.

Ordinary people in Thailand are ready to fight for democracy. This is not an abstract question but a question of bread and land for the rural population – and one that ultimately will only be solved in Thailand through socialist revolution. One woman said last week “We won't accept another coup, like in the old days, we will fight to keep the government we elected. And if the military tries a coup again, we are ready to come out, to die for democracy."

The rural population must free themselves from their leaders. Yingluck and her party is not willing to mobilise the Red Shirts, so they must mobilise themselves. What is needed is an independent peasant movement that links up with the industrial working class in the cities. Armed with aclear socialist programme this would be a mighty force which would be able to defeat the military and the reactionary, royalist, bourgeois interests that they represent.