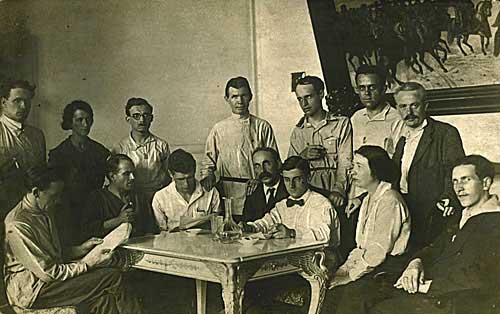 Taken from Minutes of the Second Congress of the Communist International (Fourth Session, July 25)

Reed: In America there live ten million Negroes who are concentrated mainly in the South. In recent years however many thousands of them have moved to the North. The Negroes in the North are employed in industry while in the South the majority are farm labourers or small farmers. The position of the Negroes is terrible, particularly in the Southern states. Paragraph 16 of the Constitution of the United States grants the Negroes full civil rights. Nevertheless most Southern states deny the Negroes these rights. In other states, where by law the Negroes possess the right to vote, they are killed if they dare to exercise this right.

Negroes are not allowed to travel in the same railway carriages as whites, visit the same saloons and restaurants, or live in the same districts. There exist special, and worse, schools for Negroes and similarly special churches. This separation of the Negroes is called the ‘Jim Crow system’, and the clergy in the Southern churches preach about paradise on the ‘Jim Crow system’. Negroes are used as unskilled workers in industry. Until recently they were excluded from most of the unions that belong to the American Federation of Labour. The IWW of course organised the Negroes, the old Socialist Party however undertook no serious attempt to organise them. In some states the Negroes were not accepted into the party at all, in others they were separated off into special sections, and in general the party statutes banned the use of Party resources for propaganda among Negroes.

In the South the Negro has no rights at all and does not even enjoy the protection of the law. Usually one can kill Negroes without being punished. One terrible white institution is the lynching of Negroes. This happens in the following manner., The Negro is covered with oil and strung up on a telegraph pole. The whole of the town, men, women and children, run up to watch the show and take home a piece of the clothing or the skin of the Negro they have tortured to death ‘as a souvenir’.

I have too little time to explain the historical background to the Negro question in the United States. The descendants of the slave population, who were liberated during the Civil War, when politically and economically they were still completely underdeveloped, were later given full political rights in order to unleash a bitter class struggle in the South which was intended to hold up Southern capitalism until the capitalists in the North were able to bring together all the country’s resources into their own. possession.

Until recently the Negroes did not show any aggressive class consciousness at all. The first awakening of the Negroes took place after the Spanish-American War, in which the black troops had fought with extraordinary courage and from which they returned with the feeling that as men they were equal to the white troops. Until then the only movement that existed among the Negroes was a semi-philanthropic educational association led by Booker T. Washington and supported by the white capitalists. This movement found its expression in the organisation of schools in which the Negroes were brought up to be good servants of industry. As intellectual nourishment they were presented with the good advice to resign themselves to the fate of an oppressed people. During the Spanish War an aggressive reform movement arose among the Negroes which demanded social and political equality with the whites. With the beginning of the European war half a million Negroes who had joined the US Army were sent to France, where they were billeted with French troop detachments and suddenly made the discovery that they were treated as equals socially and in every other respect. The American General Staff approached the French High Command and asked them to forbid Negroes to visit places used by whites and to treat them as second-class people. After the war the Negroes, many of whom had received medals for bravery from the English and French governments, returned to their Southern villages where they were subjected to lynch law because they dared to wear their uniforms and their decorations on the street.

At the same time a strong movement arose among the Negroes who had stayed behind. Thousands of them moved to the North, began to work in the war industries and came into contact with the surging current of the labour movement. High as they were, their wage rates trailed behind the incredible increases in the prices of the most important necessities. Moreover the Negroes were outraged by the way all their strength was sucked out and the terrible exertions demanded by the work much more than were the white workers who had grown used to the terrible exploitation in the course of many years.

The Negroes went on strike alongside the white workers and quickly joined the industrial proletariat. They proved very ready to accept revolutionary propaganda. At that time the newspaper Messenger was founded, published by a young Negro, the socialist Randolf, and pursuing revolutionary propagandist aims. This paper united socialist propaganda with an appeal to the racial consciousness of the Negroes and with the call to organise self-defence against the brutal attacks of the whites. At the same time the paper insisted on the closest links with the white workers, regardless of the fact that the latter often took part in Negro-baiting, and emphasised that the enmity between the white and black races was supported by the capitalists in their own interests.

The return of the army from the front threw many millions of white workers on to the labour market all at once. The result was unemployment, and the demobilised soldiers’ impatience took such threatening proportions that the employers were forced to tell the soldiers that their jobs had been taken by Negroes in order thus to incite the whites to massacre the Negroes. The first of these outbreaks took place in Washington, where civil servants from the administration returning from the war found their jobs occupied by Negroes. The civil servants were in the main Southerners. They organised a night attack on the Negro district in order to terrorise the Negroes into giving up their jobs. To everybody’s amazement the Negroes came on to the streets fully armed. A fight developed and the Negroes fought so well that for every dead Negro there were three dead whites. Another revolt which lasted several days and left many dead on both sides broke out a few months later in Chicago. Later still a massacre took place in Omaha. In all these fights the Negroes showed for the first time in history that they are armed and splendidly organised and are not at all afraid of the whites. The results of the Negroes’ resistance were first of all a belated intervention by the government and secondly the acceptance of Negroes into the unions of the American Federation of Labour.

If we consider the Negroes as an enslaved and oppressed people, then they pose us with two tasks: on the one hand a strong racial movement and on the other a strong proletarian workers’ movement, whose class consciousness is quickly growing. The Negroes do not pose the demand of national independence. A movement that aims for a separate national existence, like for instance the ‘back to Africa’ movement that could be observed a few years ago, is never successful among the Negroes. They hold themselves above all to be Americans, they feel at home in the United States. That simplifies the tasks of the communists considerably.

The only correct policy for the American Communists towards the Negroes is to regard them above all as workers. The agricultural workers and the small farmers of the South pose, despite the backwardness of the Negroes, the same tasks as those we have in respect to the white rural proletariat. Communist propaganda can be carried out among the Negroes who are employed as industrial workers in the North. In both parts of the country we must strive to organise Negroes in the same unions as the whites. This is the best and quickest way to root out racial prejudice and awaken class solidarity.

The Communists must not stand aloof from the Negro movement which demands their social and political equality and at the moment, at a time of the rapid growth of racial consciousness, is spreading rapidly among Negroes. The Communists must use this movement to expose the lie of bourgeois equality and emphasise the necessity of the social revolution which will not only liberate all workers from servitude but is also the only way to free the enslaved Negro people.