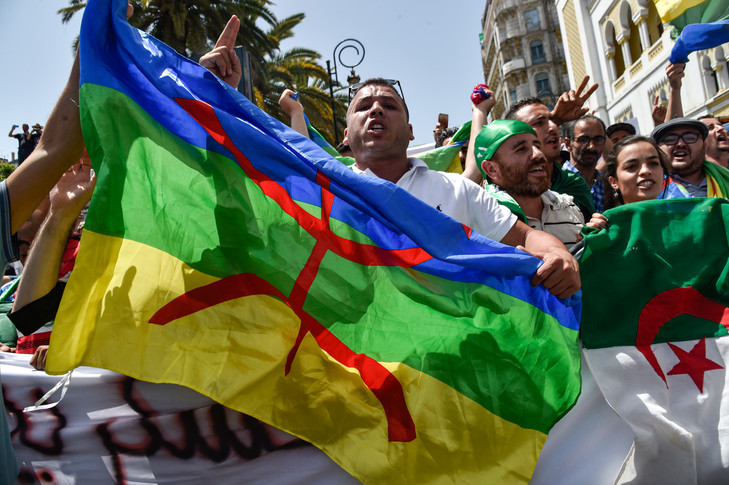 The 12 June parliamentary election was meant to give the Algerian regime a degree of legitimacy and put an end to two years of revolutionary hirak (movement). Instead, the call for boycott was overwhelmingly observed, despite a widespread clampdown in the run up to the polls.

The hirak shook Algerian society, beginning on 22 February 2019. A mass movement of workers, the poor and the youth said, “enough!” and rose up against the attempt of the aging ruler, Bouteflika, to get himself re-elected as president for the fifth time. The revolutionary movement involved millions in mass demonstrations across the country and sparked a strike movement of workers. Two months later, Bouteflika was forced to resign – a first victory for the movement. However, whilst he was removed from the scene, the regime was left intact.

The hirak raised democratic demands, was a fight against corruption, and for the national rights of the Imazighen in the Kabylie region, but it was also a movement for fundamental change in society. It expressed deep accumulated anger at the hogra – the injustice and abuse of power – against the mass of the people by the regime. It was also a cry for a future by the youth, hundreds of thousands of whom are condemned to the harga – illegally crossing the sea, risking their lives in search of a better future in Europe.

The movement showed enormous resilience and resistance, with huge mass demonstrations every Friday, and student protests every Tuesday. However, it lacked structures, organisation, and above all a clear program and strategy.

The arrival of the COVID-19 pandemic in March 2020 stopped the cycle of weekly demonstrations. But what the regime hoped would be an end to the movement proved to be merely a temporary pause. February 2021, the second anniversary of the hirak, saw the resumption of mass weekly demonstrations, despite police harassment. The renewal of the demonstrations was accompanied by a wave of strikes (postal workers, health workers, etc.) in a country hard hit by the pandemic and the economic crisis. GDP has fallen 6% and all of the pre-existing social and economic problems have been aggravated. 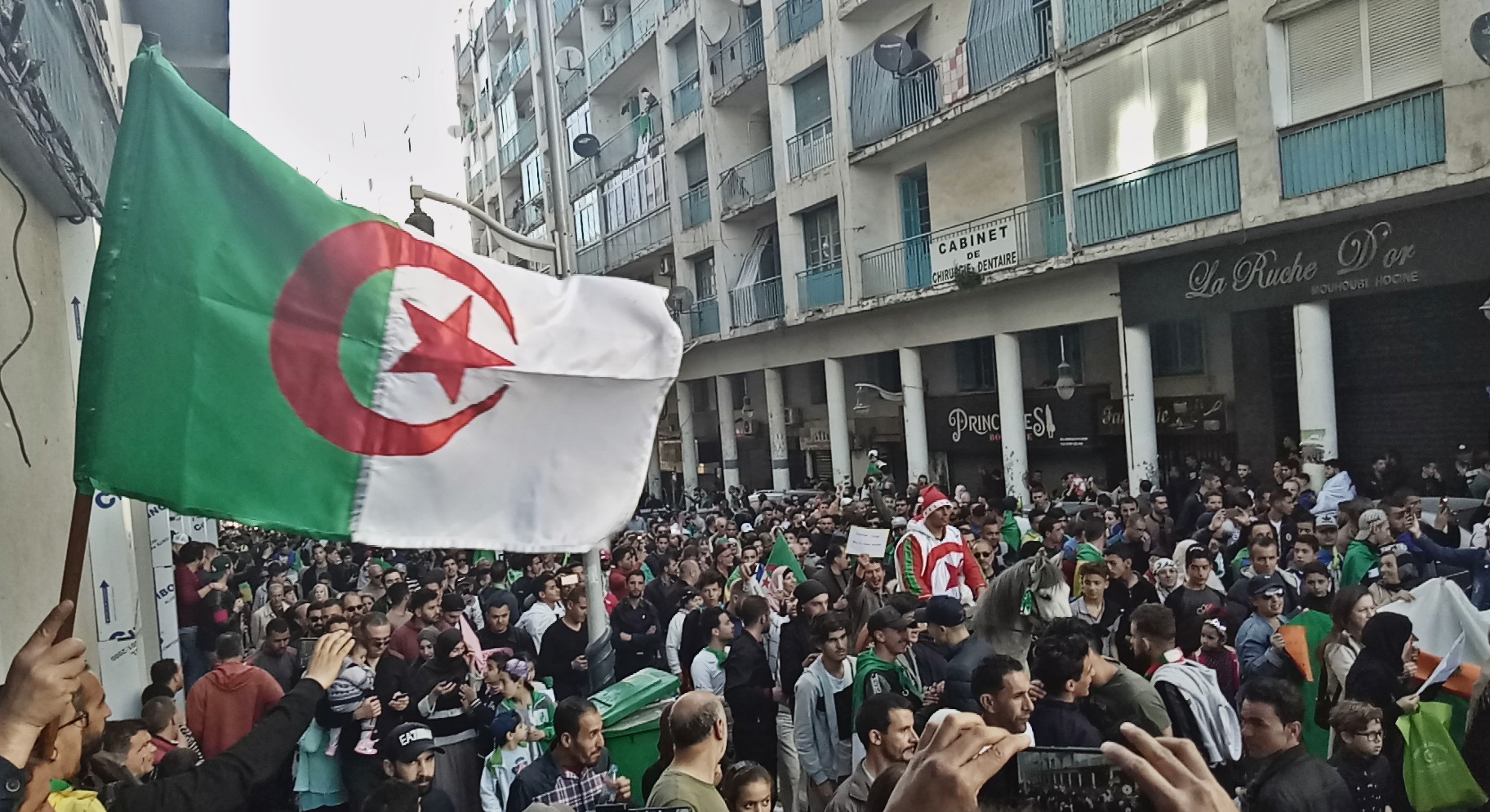 The revolutionary Hirak erupted in February 2019 over the attempt by Bouteflika to hold onto power. After being temporarily cut across, the movement has since re-erupted as of its second anniversary in February 2021 / Image Akechii

In May the government decided to ban the Friday demonstrations and a massive police presence managed to stop protesters in Algiers, though demonstrations still went ahead in the Kabylie region. This was combined with a wave of repression aimed at crushing the movement and once and for all establishing the authority of the Tebboune government.

The two prior attempts of the regime to establish its legitimacy had failed in the face of a mass boycott campaign by the hirak. On 12 December 2019, the generals’ election was defeated by the movement. According to official figures, only 39% of the people turned out. The real figure was probably even below 10%. That was the election that anointed Tebboune as president. He is an outright representative of the regime, having served as minister and prime minister under Bouteflika.

The regime attempted again to recover legitimacy through the 1 November 2020 constitutional referendum. Again, the mass movement organised a boycott. According to official figures, only 23% participated – another disaster.

The 12 June parliamentary elections were therefore a crucial test for Tebboune and the generals who still maintain the state apparatus in a firm grip. The regime launched a campaign of lies and slanders against the hirak, which was described as a “counter-revolutionary magma” on the pay of “foreign powers”. As well as banning the weekly Friday demonstrations, over 2,000 activists were arrested and 200 jailed. Several opposition parties were threatened with legal action, and there were proceedings to outlaw the Socialist Workers Party (PST) and shut down its offices. Three prominent hirak leaders were arrested on the eve of the election.

None of that cowed the movement, which delivered a solid boycott of the election. The main opposition parties called for a boycott, including the social-democratic FFS, the Trotskyist PST and PT, the communist PLD, and the liberal RCD. The boycott was particularly strong in the Kabylie region, where many polling stations could not open and the people destroyed polling booths and scattered ballot papers. In Bejaïa, thousands marched the day before to reject the elections and demand the downfall of the regime. Here, the official figures counted 4,000 voters out of 500,000 electors.

Polls opened at 8am and the official turnout figures showed a participation of less than 4% at 10am and only 14% by 4pm, a complete disaster for the regime, which then decided to keep polling stations open for an additional hour. By the close of polls at 8pm, they announced an “average” turnout of 30%, a figure no-one believed. The trick here was the use of the word “average” – in other words, turnout in every district had been averaged out without taking into account the number of electors in each one. In the end, the official figure for turnout given by the electoral authority was barely 23.03%, the lowest ever in the history of Algeria and even lower than the official figure given for the 2020 constitutional referendum. Amongst the 5.6 million ballots, over a million votes were spoiled. The whole of Kabylie turned its back on the election, with a turnout in Bejaïa of just 0.79%, and in Tizi Ouzu of only 0.62%.

The result of this illegitimate election gave a “victory” to the FLN, with 105 seats out of the 407 total – a loss of 59. In second place are the independents with 78. Third is the Muslim Brotherhood-aligned MSP with 64, doubling their previous number, and fourth is the other main regime party, the RND, which elected 57, a loss of 43. That means that even amongst the small minority who voted, the regime parties were severely punished.

The main conclusion we can draw from this election is that Tebboune’s attempt to legitimise his “new Algeria”, a mere facelift of the generals’ regime, has failed. The transition from the top has not been completed as the masses below remain restless and continue to demand real change.

On the other hand, despite its enormous strength and vitality, the weaknesses of the revolutionary movement remain: there is no clear political leadership and no democratic structures. The spontaneous character of the movement is revealing its limitations. It has been able to put the old regime against the ropes, but it has not delivered the final blow yet. The regime will remain in power, changing only its spots, unless it is overthrown by the mass movement. 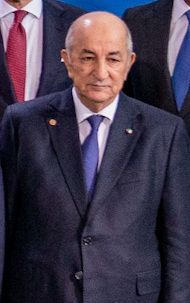 Tebboune had hoped to legitimise his regime through these elections, but turnout has been abysmally low on the back of a massively successful boycott campaign / Image: US State Department

The aim of the movement is clearly the complete overthrow of the regime. This can be achieved through mass action culminating in a revolutionary general strike, which paralyses society and strikes at the heart of the economic power of the generals and the capitalists. Democratic committees elected by mass assemblies in all workplaces, universities and schools, villages and working-class and poor neighbourhoods would give the movement an organised character, one which is not in contradiction with its mass democratic features. Delegates could then be elected to coordinate the committees at the level of municipality and then wilaya and finally at a national level.

The democratic demands of the movement (freedom of expression, of organisation, of strike, justice for the victims of regime repression) should be combined with national demands (respect for the language and culture of the Imazighen, freedom from imperialist interference) but also, crucially, with the social and economic demands (jobs for all, for a decent minimum wage, the expropriation of the ill-gotten gains of the generals and other old regime officials, the expropriation of the multinationals, the defence of the state property of natural resources).

If the Algerian revolution stops at dislodging the old regime officials from power it would soon disappoint the expectations of the mass of workers and youth, as we have seen in Tunisia. The battle cry should be that of permanent revolution. The struggle for democratic and national demands can only be seriously won by the revolutionary movement of the people with the working class playing a leading role. Once the working class takes power it cannot stop at democratic and national demands but must also strike blows against the property rights of the capitalists which stand side by side with and back up the generals, and against the property rights of the multinationals which bleed the nation while condemning the youth to forced migration. A victorious revolution in Algeria would not stop at its borders but would immediately exert a powerful attraction on the workers and youth in the whole of the Arab world, starting with its neighbours, Morocco and Tunisia.

Solidarity with the PST – statement by the International Marxist Tendency

The courageous and resilient struggle of the Algerian workers and youth for the last two years managed to bring down the hated Bouteflika, but the regime is still in place. The PST and the Hirak are an obstacle to the completion of a transition at the top aimed at giving the regime a “democratic façade”, and this is the reason why they are under assault.

We reject this repression and express our full solidarity with the PST and the Algerian masses in their struggle for democratic rights and genuine liberation from the yoke of imperialism and capitalism. We will not stand aside while the regime tramples on the democratic rights wrested by the masses in struggle.