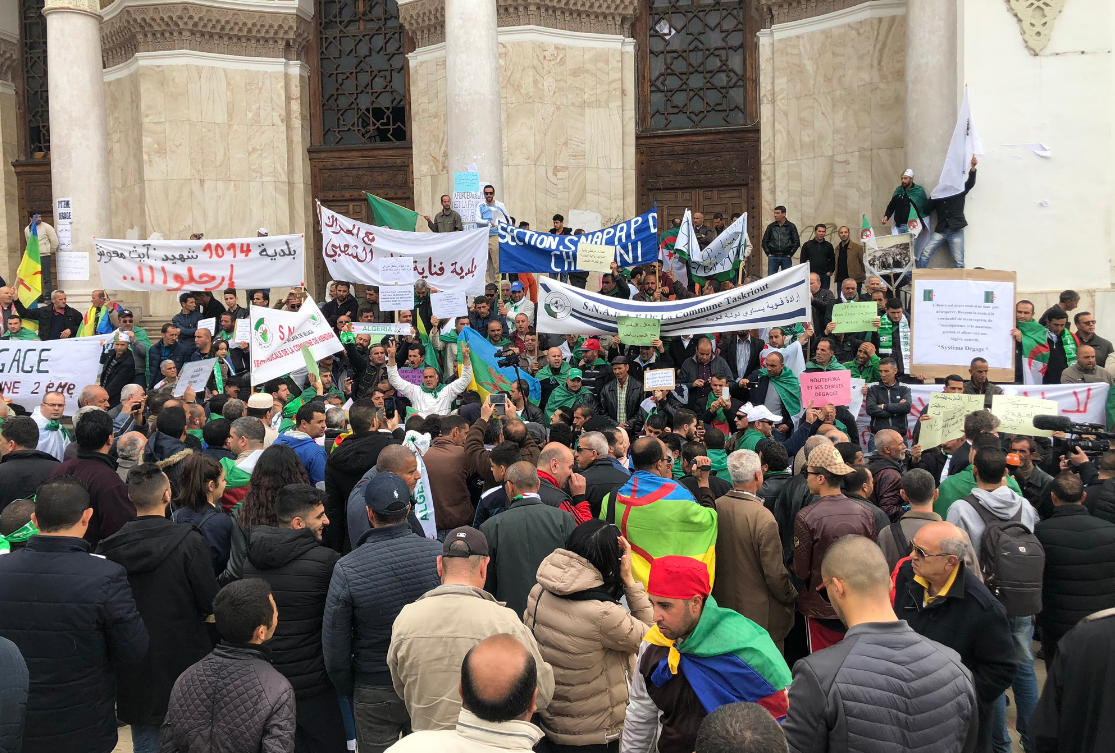 The revolutionary movement in Algeria is keeping up its momentum as the regime begins to crumble. Millions of people took to the streets again on Friday 22 March and a new general strike movement is developing, which could bring down the whole rotten regime.

On Friday, millions of Algerians defied bad weather to hit the streets yet again, demanding the resignation of President Abdelaziz Bouteflika. In Algiers, a two-kilometre long column of people snaked through one of the main streets of the capital to rally at the Grand Post Office in the city centre. The city population had prepared this protest for days, with households making food, bringing water and other means of supporting the people on the streets. Similar scenes were seen throughout the country in all major towns and cities. According to official police reports, which tend to downplay events, there were protests in 40 out of 48 provinces.

All layers of the toiling population, from young primary school children, unemployed youth, workers, students teachers, civil servants, and industrial workers to housewives and pensioners are entering the scene, bringing with them their own particular grievances.

The movement initially focussed on rejecting Bouteflika’s candidacy for a fifth term in power. It rejected politics and demanded the “upholding of the constitution”. This was partly due to the spontaneous nature of the movement, and partly to the liberal illusions that some middle-class layers, such as doctors, lawyers etc. brought to the movement. The effect was to tone down the slogans and cut through the general strike movement that was developing on 10-11 March.

But, as many people were saying in the aftermath of that movement, those two days of strike action were the most effective two days of the whole movement, forcing Bouteflika and others to back down from their intransigent positions. Events and experience of the struggle itself are transforming consciousness rapidly. The rising confidence of the masses in their own power, the obvious incompetence of the political opposition and the provocations of the ruling class are pushing the movement to advance. The slogans have gone from: “no to a fifth term” to “they all have to leave!”, and "the entire system must go!", while many are calling for a constituent assembly and a Second Republic.

The movement is defiant

Bouteflika’s clique initially tried to diffuse the movement by cancelling the elections and promising to set up a “national conference” at an unspecified time, to draw up a new constitution. Very similar promises were made to defuse the initial protests during the Arab Spring in 2011, but never materialised. Clearly, the plan of the regime was to throw dust in the eyes of the movement and sap its momentum in order to prepare to regroup and strike back. But the manoeuvre had the exact opposite effect. The movement has grown more defiant than ever before.

Meanwhile, as pressure mounts, more and more regime insiders are defecting, like rats fleeing a sinking ship. The head of the army, Lieutenant General Ahmed Gaed Salah, who has been switching between threatening and conciliatory statements, said last Tuesday that the demonstrations had been “marked by the deeds of noble aims and pure intentions, through which the Algerian people have clearly expressed their values ​​and principles of sincere and dedicated work to Allah and the motherland.”

Then the ruling coalition parties, FLN and RND, both officially came down on the side of the protesters, with FLN leader Moad Bouchared saying that the “FLN fully supports the popular protest movement,” calling for negotiations and “unity” to ensure stability. There was a slipstream of businessmen coming out in support of the protests. In fact, even the bosses’ association, FCE, offered its support! Since last week, the new government, which is trying to give itself a democratic image, has invited a whole series of activists, NGOs, unionists and organisations, many of whom have traditionally been close to the regime, to participate in negotiations for a transition of power. But none of these have been accepted, revealing the enormous pressure from below.

The ruling class is terrified in the face of the mass movement. If it tries to suppress it, it will risk breaking the armed forces on class lines and losing control over the situation completely. At the same time, its promises and illusory concessions are not working out either. Thus in order to attempt to try to lead the movement down “safe” channels – i.e., a road where the ruling class retains power over the main levers of the state and the economy – it is dressing itself in the colours of the revolution. One of the many pieces of advice they bring with them is to avoid a general strike and remain “peaceful”. Of course, the movement has no interest in violence as such, yet what these liberal gentlemen and women are really saying is that the masses should not adopt militant tactics such as a general strike, and refrain from challenging the Algerian state. That is, they are asking the movement not to challenge the economic power of the ruling class and its monopoly on violence, which it exerts through the state apparatus.

In spite of this, seeing that Bouteflika is not budging, a call for a new round of general strikes has been spreading since last week. In fact, regardless of all attempts by liberal forces within the movement to stall a strike movement, “to defend the nation”, the pressure from the working class has also been rising. Over the past week, the anger against the UGTA leadership (in particular the Bouteflika insider, Abdelmadjid Sidi Said), has seen a dramatic rise. There have been several protests outside of UGTA headquarters and the departure of Sidi Said has become a regular slogan at demonstrations:

The pressures from below are radicalising one union organisation after another. In Tizi-Ouzou, the local UGTA branch issued a call for a general strike and a march today at 10:00 am. The demands of the strike are: respect for the popular will, overthrow of the system, a democratic second republic of justice and liberty, departure of [UGTA head] Sidi Said and upholding the dignity of the workers in a free and democratic UGTA.

Another call for a general strike has been issued by the independent municipal workers union SNAPAP, which is reportedly the biggest in the public sector. Since this morning, thousands of workers have been blocking government buildings demanding radical change. Terrified of the rising strike movement, many liberal and bourgeois commentators, journalists, and “experts” have been calling for it not spread to the oil sector. But noise from the ground indicates that the oil and gas sector will also participate in crippling Algerian capitalism:

The UGTA union council of the state-owned oil and gas giant, Sonatrach, in the oil field of Hassi Messaoud has announced that it now officially supports the popular movement.

The system must fall!

On the one hand, the capitalists are afraid of the damage to their profits if production is halted. But more importantly, they are afraid of the working class realising its own power, and in so doing, realising that it does not need the capitalists, generals and oligarchs to run society. On the contrary, as is visible from the enormous discipline and order of the revolutionary movement, the masses are far better equipped at running society than the parasites at the top. A revolutionary general strike of the key sectors of the economy would expose the irrelevance of the ruling class.

The Bouteflika regime, along with all its hangers-on with in the army, the business community, the state bureaucracy etc., play no progressive role in Algerian society today. They have no interests apart from the satisfaction of their own immediate greed and opulence, while the rest of society falls apart. The revolutionary movement has diametrically opposed interests to these people. What is necessary now is to take decisive steps forward to overthrow the regime once and for all. The call for a general strike must be spread to every factory and public institution. The strikers must elect delegates and connect – along with existing factory, neighborhood and school committees – on a regional and national scale in order to take power. No other force in society represents the interests of the masses. At the same time, no other force can resist the power of the masses. By taking power into their own hands, the working people can start the reorganisation of society along democratic lines and address the social and economic needs of the majority.