International Marxist Tendency
Share
Tweet
On June 23 Alan Woods was in one of the heartlands of the Venezuelan industrial proletariat, Ciudad Guyana, where the country's heavy industry is based. More than 350 workers from several key industries attended the meeting and really connected with the ideas of revolutionary Marxism that were outlined by Alan.

Early in the morning on June 23, Alan Woods, a leading member of the International Marxist Tendency, arrived at Ciudad Guyana, Bolivar state, in Venezuela. This city, founded in 1961, is the point where the two big Caroní and Orinoco rivers merge. The Orinoco is navigable up to this point, hundreds of miles from its mouth, and through it the national basic industries supply the Latin American market. This is the heart of the country's basic industries, and the bulwark of the heavy battalions of the Venezuelan proletariat.

Puerto Ordaz is one of the two local councils in the city (the other being San Félix) and is where the basic industries that make up the state owned CVG (Venezuelan Guayana Corporation) are based, including Alcasa, Venalum, Bauxilum, Carbonorca (producing primary aluminium, alumina and carbon anodes for the aluminium industry), Ferrominera (extraction, processing and commercialisation of iron). Also this is where the Sidor steel mill (Siderúrgica del Orinoco) is based and where Venezuela's main electricity is produced, at Edelca. Puerto Ordaz has also been called Venezuela's Petrograd because of the high concentration of industries and workers, which is regularly shaken by mobilisations of the working class. 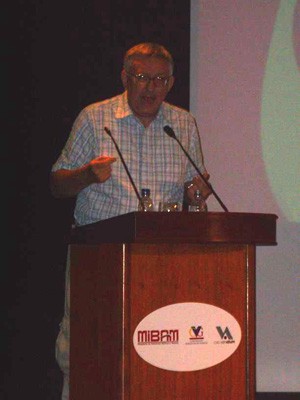 One of the most important companies here is Venalum, the largest aluminium plant in Latin America, with its 4,000 workers. An industrial giant, Venalum is the second most important company in the country after oil company PDVSA. To give an example of the scale we are dealing with here, in one day Venalum uses more electricity in the production of aluminium than the whole city of Caracas. Energy comes from the nearby hydro-electric power stations. One could say that as the Orinoco and Caroní rivers go through Ciudad Guayana, the workers capture some of their force and concentrate it in the form of aluminium ingots.

On Monday afternoon, comrade Alan Woods spoke at a very important public meeting at the Venalum plant attended by more than 350 workers, to launch his book "Reformism or Revolution". Those present came not only from Venalum, but also from Carbonorca and Alcasa. Many of them are members of the political discussion circles which are organised in these companies. This is an indication of the interest aroused by Alan Woods' tour and by the ideas of the IMT and its Venezuelan section, the CMR, among the Bolivarian rank and file.

In a speech which lasted almost an hour and a half, Alan pointed out that the ideas of Marxism were as relevant as ever and that any attempt to reinvent socialism was like attempting to reinvent the wheel. "Everybody talks about socialism of the 21st Century, but nobody knows what it is" he said, to general laufhter. "Socialism of the 21st Century has the advantage of being like an empty bottle which anyone can fill with any content he likes, for instance the ideas of reformists like Dieterich". Alan stated that he had not found one single original idea in the writings of Dieterich and that most of them were borrowed from the Utopian socialists, and Proudhon in particular, "that is, of pre-Marxist theoreticians, ideas in the pre-history of the movement". 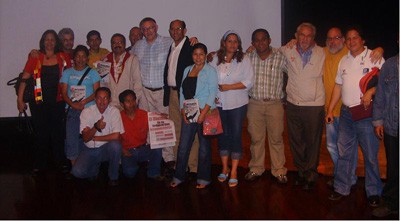 He explained that in order to build socialism the economic resources of the country must be in the hands of the working class so it can plan the economy, putting an end to the anarchy of capitalism and the ills it creates in the Venezuelan economy, like inflation, low rate of productive investment, etc. "In Venelum all aspects of production are planned, nothing is left to chance". In a socialist economy the whole of the country is treated as if it was a factory, with all the factors of national production being organised according to a national economic plan "debated and approved by the country's working class", said Alan. 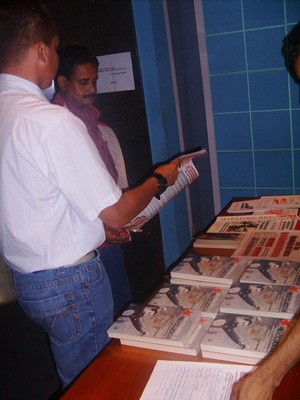 At the end of Alan's lead off, which was received with a big applause from the workers, there was a lively debate. Answering the workers' questions, Alan stressed that it is impossible to build socialism in one country, and that he consider Simon Bolivar's idea of Latin America unity to be perfectly relevant, with one small amendment: "that this unity is impossible on capitalist basis", and advocated a "Socialist Federation of Latin America and the Caribbean". "The starting point for Latin American unity," said Alan, "is that you, the workers of Venezuela, take power, control the factories and companies of the country and build a genuine revolutionary state, a workers' state". And he continued: "A socialist Venezuela would be a beacon for the oppressed of the whole world. Not a single bourgeois regime would survive in the continent, they would all fall one after another like domino pieces," to which the workers responded with a thunderous ovation.

At the end of the meeting a long queue of workers waited for Alan to sign copies of the book. In about two hours, 45 copies of "Reformism and Revolution" were sold, 75 copies of the latest issue of El Militante, the Marxist voice of the PSUV, and more than 100 workers left their contact details to get involved in the Revolutionary Marxist Current (CMR).

On Wednesday, Alan Woods will speak at a book launch meeting in Sidor, the steel mill recently renationalised by president Chávez after months of workers' struggle.