International Marxist Tendency
Share
Tweet
Around 400 people turned up at Alan Woods' meeting in Merida, among them a large number of activists and revolutionaries of the city. As one of them said at the end, "the reformists want to demoralize and confuse people. I have listened to others who criticize them but they are downbeat. Alan is different, he charges your batteries, encourages you to fight."

Merida is a beautiful city situated on a plateau surrounded by high mountains, in the Venezuelan Andes. The core of the Universidad de Los Andes (ULA), one of the leading universities in the country, is situated in Merida. The city also has strong commercial and tourist sectors and is surrounded by many rural villages. 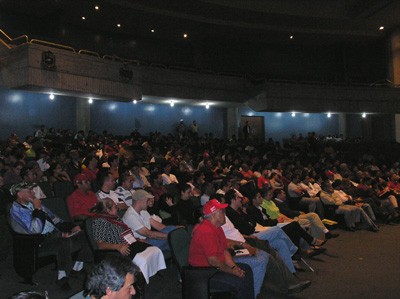 On Monday, June 30 Alan Woods presented "Reform or Revolution" in Merida before about 400 people, among them a large number of the activists and revolutionaries of the city. What was notable was the presence of young students of the ULA, activists and leaders of the local PSUV, as well as a large group of workers and several teachers and community militants.

At the front of the meeting there was a huge banner with the initials of the CMR and the PSUV which read "Reformism or Revolution" and with a quote from Leon Trotsky in the 1930s: "The crisis of humanity is the crisis of its revolutionary leadership." The panel, along with Alan Woods, was made up of Marcos Diaz Orellana, elected a few weeks ago by the ranks of the United Socialist Party of Venezuela (PSUV) as candidate for state Governor. In addition, there were present at the meeting other candidates elected by the party ranks, such as Pedro Àlvarez, candidate for Mayor of El Egido, and other revolutionary leaders like Freddy Teran, of the PCV, and others. Also present was Humberto Lòpez, President of the Municipal Printing House IMMECA, which printed the Venezuelan edition of "Reformism or Revolution, Marxism and socialism of the 21st century." This Venezuelan edition of the book was hailed as a great achievement by those attending.

After a brief presentation by Eduardo Molina, activist of the PSUV and the CMR, Alan outlined the international and Venezuelan crisis and decline of capitalism as he did in previous meetings and then concentrated on what is happening now and the perspectives for the Venezuelan revolution. 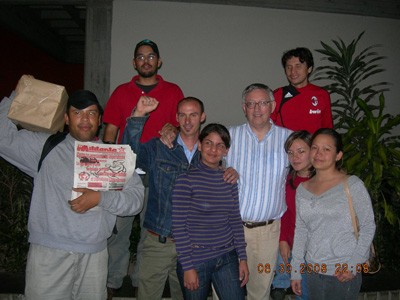 "There are people inside and outside Venezuela who say that here there is no revolution. They do not understand anything. What is a revolution? I ask you. The entry of the masses onto the scene of history in an attempt to change society. Do we have this in Venezuela? Yes or no?"

Alan - as in all his other speeches - reiterated the enormous power of the masses, of the working class, and how such a force has defeated all attempts at counter-revolution, but then warned against the danger that exist if such a force is not organized and led in the struggle to expropriate the capitalists and to take the revolution through to the end. "We do not want to nationalize everything, as the counter-revolutionaries state, we do not want to nationalize small businesses, nor of course cars, houses, etc. But yes we must nationalise under workers' control the banks, the land and the large companies."

These words were met with a thunderous applause by all those present. the candidate for Governor, comrade Marcos Diaz, applauded these words from the presidium.

Then Alan went on to warn against the dangers that exist if this programme is not carried out urgently. "The red light is flashing for the revolution. The problem on December 2 last year, when the referendum on constitutional reform was lost, was that people are not seeing decisive changes in their lives; their problems are not being solved once and for all. Of course, there has been progress but there has not been a definitive solution to problems such as unemployment, poverty, homelessness and others. And I tell you one thing: If there is no solution forthcoming to these urgent problems, the revolution is under serious threat. It is not possible to satisfy the two classes, the bosses and the workers; in the end one class must triumph and one must lose."

During the discussion, several people expressed concern about how to take the revolution through to the end, and concern about the fact that several companies that had been occupied by workers, including some in Merida such as the Planta de Residuos Solidos and TV ULA, had not been expropriated, as well as concerns about the meaning of the meeting between President Chavez with the bosses on June 11.

"Sectarianism and the bureaucratic interests of the leaders have destroyed the UNT. The workers must revive it with a Marxist programme." 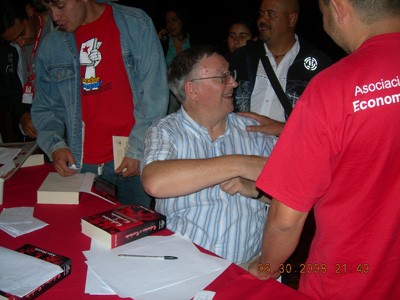 The intervention of several ultra-left elements accusing Chavez and the PSUV of being bourgeois was answered by comrade Alan in such a sharp and firm manner that this provoked repeated applause from the audience.

"You can say whatever you want about Chavez but there is one undeniable fact. He called for the taking over of the companies And what did the leaders of the various tendencies within the UNT do? What did Chirinos, Marcela Maspero and others do? Nothing. Absolutely nothing. That same evening they should have organized the taking over of all the closed factories as possible and set them to operate under workers' control while demanding their nationalisation. But they did none of this. Why limit oneself to talking solely of the state bureaucracy? What about the union bureaucracy? President Chavez, apart from calling for the occupation of the factories, also called on the working class to take the lead in the revolution. But rather than use this opportunity to carry forward the revolution, the leaders of the UNT preferred to fight among themselves to see who controlled the union confederation, putting their narrow interests above those of the general interests of the working class."

These words drew applause from many of those present in the meeting and particularly from a significant group of construction workers present in the hall.

"The working class has enormous strength," said Alan. "Without your permission not a wheel turns, not a light shines, but that strength should be organized around a correct programme and methods, and find a leadership, otherwise it remains only as something potential and is lost. The sectarians have destroyed the UNT. We must revive the UNT, but that can only be done by the rank and file of trade unions, fighting for a genuinely socialist programme."

"Outside the PSUV there is nothing"

Alan was particularly firm in answering some sectors who qualify the PSUV as a bourgeois party and call on people to break with it and build a new revolutionary party.

"If you want to form a party outside the PSUV it will be without the masses, it will be a party of three people and a dog that will do anything but the revolution. Let me be very clear: Outside the PSUV and the Bolivarian movement there is nothing. Those comrades who say Chavez is a bourgeois, that the PSUV is bourgeois remind me of extraterrestrials. On what planet do they live?"

"The PSUV put in motion a massive force: 5 million people. But you have to motivate the ranks of the party with ideology. That ideology in my opinion can only be scientific socialism, Marxism. We must build a Marxist tendency within the party to fight for these ideas. I do not come here as an intellectual, as you will have realized by now," said Alan, among smiles of approval and complicity of the audience, "I come as a revolutionary militant. I call on you to build this Marxist Tendency."

The meeting ended with the same scenes we saw in previous events: the people at the meeting surging enthusiastically towards the stage to ask Alan to sign his book and thank him for his speech. "Listening to Alan is an injection of enthusiasm," said one of those present as he gave his details indicating that he wanted to work with the CMR, "the reformists want to demoralize and confuse people. I have listened to others who criticize them but they are downbeat. Alan is different, he charges your batteries, encourages you to fight."