International Marxist Tendency
Share
Tweet
The launch of the book Reformism or Revolution, Marxism and Socialism of the 21st Centuy (a reply to Heinz Dieterich) took place on June 21, at the Art Gallery of the Regional Legislature of Anzoategui, in Barcelona, in the presence of 90 workers, youth and community leaders. Alan Woods expressed concern that the delay in the revolution was already producing signs of apathy and disillusionment in the Bolivarian rank and file.

The launch of the book Reformism or Revolution. Marxism and Socialism of the 21st Centuy (a reply to Heinz Dieterich) took place on June 21, at the Art Gallery of the Regional Legislature of Anzoategui, in Barcelona. In the presence of 90 workers, youth and community leaders. 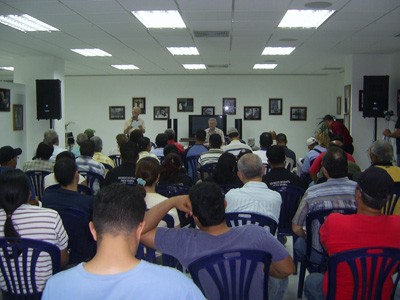 Alan Woods' tour presenting his new title could not have come at a more appropriate time. Since June 11, when president Chávez held a meeting with businessmen appealing to them to invest and to make an alliance to develop the country's productive capacity through mixed companies, the pressure of the reformists has continued to increase, as well as the anger and discontent of the revolutionary rank and file. The main argument of the reformists who surround the president is that through this strategy of an alliance with businesses, they will get investment in the country, and economic sabotage will be prevented in the run up to the November elections. It is therefore a question for them of neutralizing the enemy of the revolution by making concessions.

As Alan Woods has already pointed out in other meetings of this Venezuelan tour ‑ which has already passed through 2 of the 9 states it will visit ‑ all experience since 2002 has shown that every time the Bolivarian leadership has made appeals to negotiate with the bourgeoisie and an open hand has been offered to the oligarchy, they have interpreted this as a sign of weakness of the revolutionary government and have redoubled their efforts to overthrow president Chávez, as we saw after the coup in 2002, the oil sabotage and the recall referendum. Alan Woods has already said that any appeals to invest, appeals to conciliation will lead to the same situation: the bourgeoisie will draw the conclusion that we are weak and will attack the revolution again with the aim of destroying it.

The meeting in the Barcelona Art Gallery was introduced by comrade Julio Ulloa, a well-known left activist and curator of the gallery, who also chaired the meeting. Alan spoke for more than an hour covering several subjects: the crisis of world capitalism and its many manifestations like the war in Iraq, the food crisis, inflation and recession in the US, and end by concentrating on the perspectives for the Venezuelan revolution.

"In the meeting with businessmen on Wednesday, June 11, I could see the same smiles as in Miraflores during the April 11 coup in 2002. Shakespeare used to say ‘there's daggers in men's smiles' and the same can be said of this meeting... Daggers in the smiles of the capitalists towards president Chávez and the revolution is what I saw in that meeting. The reformists who advise the president try to convince him that with some good will on the part of the government they will change their attitude towards the revolution. This is in direct contradiction with the experience of the last 10 years" said Alan.

Alan stated that he was very worried about the development of the Venezuelan revolution, and the signs of apathy and disillusionment he has witnessed in the Bolivarian rank and file in the time he has been in Venezuela. He reminded everyone that it had been president Chávez himself who had said that there was no Third Way between capitalism and socialism, and that the so-called Third Way was "a farce". Alan stressed the need to rectify and to complete the revolution "expropriating the banks, the land and the big industries under workers' control", as the only way of "planning the economy to the benefit of the majority of Venezuelans". Alan pointed out that these sections had to be expropriated as the prior condition for planning the economy. "You cannot plan what you don't control, and you cannot control what you don't own", he said.

This gave way to a very lively debate, with those sections who support reformism attempting to defend the idea of a mixed economy, something which was vigorously opposed by Alan in his reply.

The meeting ended at 6pm with the enthusiastic singing of the Internationale, something which is not common in Venezuela, and many buying the book and getting it signed by Alan. The comrades of the CMR in Anzoategui sold many copies of El Militante. Without doubt, the meeting served to bring the ideas of Marxism to revolutionary activists in Barcelona.