International Marxist Tendency
Share
Tweet
Alan Woods’ successful speaking tour to launch Reformism or Revolution arrived in Caracas. More than 100 people, workers, students and political leaders of the Bolivarian movement filled the Rouge convention hall of the Hotel Alba. We had the honour to have as a presenter Adán Chávez, candidate for the governorship of Barinas, who is the former minister of Education and former ambassador to Cuba.

On Tuesday, July 1st, a meeting took place at the Rouge convention hall of the Hotel Alba in Caracas to launch Alan Woods' book Reformism or revolution. Marxism and Socialism of the 21st Century (a reply to Heinz Dieterich). More than 100 people, workers, students and political leaders of the Bolivarian movement filled the room and listened to the ideas of the International Marxist Tendency (IMT). We had the honour to have as a presenter Adán Chávez, candidate for the governorship of Barinas, who is the former minister of Education and former ambassador to Cuba, amongst other positions he has occupied in the leadership of the revolution. A few years ago Adán Chávez also presented Alan Woods' book Reason in Revolt in Cuba, with great success. 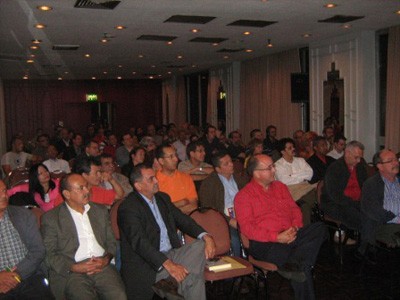 Adán Chávez introduced the book in a plain and colloquial manner. He started by saying that, "It is an honour for me to present the book Reformism or Revolution. Unfortunately I have only had the time to read a small part of the work, but what I have read is enough to make clear what its aims are. It encourages us to read the works of Marx, Engels, Lenin and Trotsky". And he continued: "After the fall of the USSR, many have abandoned the ideas of Marxism and try to hide behind abstractions in the clouds in order to disguise their revisionism".

Adán mentioned that Alan compares Dieterich to Dühring and how we should all read Engels' Anti-Dühring. "We must rescue the ideas of Marx and other great thinkers of the past. This is one of the aims of this book. The other is to demolish the ideas of a certain citizen [he did not use the word ‘comrade'] who pretends to have invented new ideas and considers the old ideas as being out of fashion. I think that what Alan does is to criticise this theoretician of reformism as a way to explain the ideas of Marxism and how they are relevant today. The traitors, the reformists are trying to find a theoretical justification for their betrayal of socialism. Even though I have only read a part of Reformism or Revolution, I have read other books by Alan like Reason and revolt and they are always very enjoyable, and therefore I have no hesitation in recommending the reading of this book, which proves that the ideas of Marx, Engels, Lenin and Trotsky are still relevant today. While we maintain our own identity and idiosyncrasy, these are the ideas the Bolivarian revolution must be based upon, and not others." He then proceeded to read a biographical note on Alan Woods, ending with the following words: "Alan is not only a theoretician but a practical revolutionary, like we all should be".

Then Alan spoke thanking Adán Chávez for his presence in the meeting and spoke for an hour to the audience. Amongst other ideas, Alan explained how many people in Europe did not understand what was happening in Venezuela and had reservations about whether what was taking place was a revolution, and particularly about the fact that Chávez was a military man. As an example Alan explained how he recently was in Italy where a journalist from Il Manifesto asked him what Venezuela had to do with what we normally understood as a revolution. Alan pointed out that history knows all sorts of transformations and that the main feature of a revolution - as explained by Trotsky - was "the participation of the masses in politics, and this is precisely what we see in Venezuela".

Alan explained the effort involved in writing the book because of how painful it was to follow the confused ideas of Dieterich. "It is a bitter apple" interjected Adan Chávez, to which Alan agreed. Alan criticised the so-called left intellectuals who hide their ignorance behind an incomprehensible verbiage to end up defending capitalism. "A good professor is one who makes complex ideas easy to understand". He also said that he spent seven years studying in university and that if he had learnt anything in that time was that "you can find the most ignorant people in the world between the four walls of a university". "Maybe they know something of their narrow speciality, but are completely ignorant of life", said Alan.

An attack in El Universal

In its edition on July 1st, the Venezuelan right wing paper El Universal, one of those with the largest circulation and also one of the most virulent against the revolution, published an opinion column signed by José Gómez Febres, entitled "Good Luck Ali". The article made an appeal to the government to rely on the capitalists and attacked comrade Woods saying: "to worry about the issue of supply is landing in the real world, and breaking with the chimeras of the childish left and its European theoreticians like Alan Woods. It reinforces the trend towards revising the relationship with the business world". Alan replied that this article was an indication that the IMT was carrying out correct work in Venezuela and that we would have to worry if they did not attack us: "The dogs bark, therefore the caravan goes on". At the same time he pointed out that this was the same accusation of utopianism that had always been levelled against Marxists.

Alan also stressed that it was very important to achieve a victory for the PSUV in the governor and council elections in November. He mentioned a recent speech by Chávez in Carabobo, where he said that these elections can only be won by mobilising the people, and that they had to be inspired. Alan said he completely agreed with the comandante and added that in order to inspire the workers and the people, the revolution had to be carried to its conclusion. "Reformists attack us saying that we cannot infringe on private property rights. This was seen particularly during the constitutional referendum when the opposition waged a campaign on those lines saying that private cars and houses were going to be expropriated." Alan asked those present: "Do we think that during the referendum we responded properly?" And the unanimous answer was: "No!" Then Alan explained that the revolution is not interested in the private property of 98% of the Venezuelans, of the workers, the poor, the peasants and the middle class, "what we are interested is in the private property of 2% of the population" to which the audience erupted into an ovation. According to Alan, president Chávez should pass an enabling law expropriating "not everything, but just three things: the land, the banks and the big industries."

The meeting ended with a lively discussion where those present asked all sorts of questions: about whether the people understood the ideas of Marxism or not, about the need to expropriate the land, amongst many others to which Alan replied in closing the meeting. At the end of the meeting many copies of the book were sold and many of those present left their contact details to know more about the Revolutionary Marxist Current, the Venezuelan section of the IMT.