There was a very successful presentation of Alan Woods' book in the Sidor plant, which has been nationalized by Chávez, with 550 Sidor workers attending the launch of Reformism or Revolution and many workers showing a keen interest in the ideas of Marxism and the Marxist Tendency. 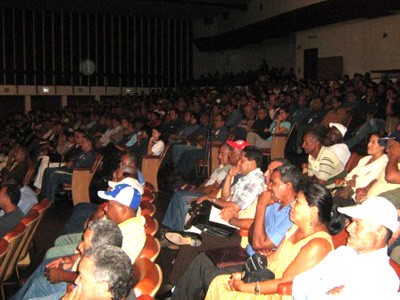 Sidor (Siderúrgica del Orinoco), in Puerto Ordaz, Bolivar state, is one of the largest steel mills in Latin America. Since the Caldera government sold it off to an Argentinean multinational more than a decade ago, the workers have suffered a process of casualisation and subcontracting of their jobs. This situation led to a workers' struggle which, through pressure on the revolutionary government, led to the nationalization of the company. After 13 months of struggle for a collective bargaining agreement and nationalization, and faced with the intransigent position on the part of the owners Termium, president Chávez gave the order to nationalise it. On June 30th the process of nationalisation of Sidor will be completed, and will be the culmination of years of struggle of the Sidor workers in defence of their jobs, for an improvement of their conditions and for the nationalisation of the company.

At 2pm, on Wednesday, June 25, the launch meeting of Alan Woods' book Reformism or Revolution. Marxism and socialism of the 21st Century (a reply to Heinz Dieterich) started, with an audience made up of 550 enthusiastic Sidor workers who filled the meeting room to capacity, some of them having to sit on the stairs or stand in the corridors. The panel of speakers was composed of the Vice-Minister of Basic Industries and Mining, Iván Hernández, the vice-president of CVG, Elisabeth Alves, the Sidor union Sutiss executive member José Meléndez and Francisco Rivero representing the Revolutionary Marxist Current, the CMR. This was an historic occasion, being the first time that the ideas of Marxism were explained in the Sidor meeting hall. This, which would have been unthinkable just a few months ago, became a reality on Wednesday afternoon. 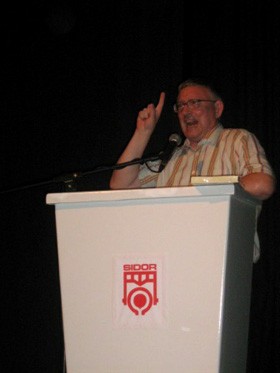 Comrade Alan Woods pointed out that in the last 20 years all the perspectives of the ruling class after the fall of the Soviet Union have collapsed. There is no peace, nor economic growth, nor political or social stability. "If you turn the TV on, you do not need to be a great philosopher to see the enormous crisis of capitalism worldwide," said Alan.

Reformists use as a general argument against revolution the possibility of imperialist invasion, said Alan. But, even imperialism has its own limits. Look at Iraq and Afghanistan. Imperialism is bogged down in both these countries. "Sooner or later they will have to leave Iraq with their tail between their legs. The US is spending two billion dollars a week on the war. This is a haemorrhage of blood and gold that no country can sustain indefinitely", said Alan, "therefore, in the current conditions an imperialist invasion of Venezuela, as would have happened in the past, is ruled out."

Alan also criticised those who, like Dieterich, attempt to reinvent socialism. He defended the relevance of the ideas of Marxism and of the Communist Manifesto, which he said: "is today even more relevant than when it was originally written. Reformists accuse us of being utopians while they describe themselves as realists, but their realism is that of a man who tries to teach a tiger to eat lettuce instead of eating meat."

Comrade Alan Woods criticised the idea of Dieterich of the Regional Block of Power, which consists of regional alliances with the bourgeoisie of other Latin American countries: "Argentina, allegedly, would be part of such a Block, and we all know how the Argentinean capitalists love the Venezuelan workers!" (Since the former owner of Sidor was an Argentinean capitalist group, this gave rise to general laughter). Alan countered the idea of alliances with Latin American bourgeois governments by saying that "the only allies of the Venezuelan revolution are our class brothers and sisters from other countries and not the capitalists." 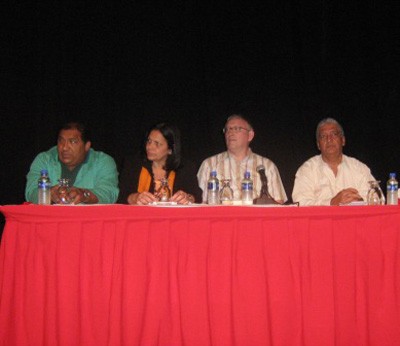 "The reformists are putting on the pressure so that private property will not be touched. They attempt to plan capitalism. How can you plan what you do not own?" questioned Alan. He said that he was in favour of not touching the private property of 98% of Venezuelans, that is, the workers, the peasants and the middle class, but that he was in favour of expropriating the property of 2% of the population, that is, the capitalist class. This was received with general applause.

"The example of Sidor must be followed and the main industries, banks and the land must be nationalised under workers' control," he said. "The workers of Sidor have shown with their example that the only way to solve their problems is by struggling and organising from below," he added, to great applause from the workers.

Alan also added that one can only build socialist companies if these are under the control of the workers and that bureaucrats are always characterised by their mistrust of the workers. "The working class has shown that it is capable of putting itself at the forefront of the revolution. The day when the news broke of the nationalisation of Sidor, production went up and the workers got organised to guarantee that the capitalist managers would not sabotage the process of nationalisation. All this proves that the working class has a high level of consciousness, contrary to what the reformists argue." 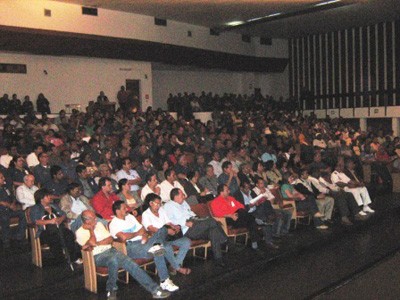 Alan ended by stressing that "we must win the council and governor elections in November by voting for the PSUV candidates," but he added that the result of the constitutional reform referendum was a warning for revolutionaries "because it showed that the people and the workers are getting tired of seeing how their problems are not being solved, tired of speeches and elections while the revolution is not carried through to the end with the expropriation of the capitalists", which was received with another ovation from the workers.

Alan Woods' intervention was followed by debate in which workers asked questions and spoke. One female worker, Yessica, said that the new company cannot repeat the same corruption and inequality of the capitalist company, where managers would get up to 43,000 dollars a month, while the workers were receiving a pittance. She said that workers' control, like the one that had developed at departmental level to prevent capitalist sabotage and ensure that the company was in working order for nationalisation, must be the way forward.

In replying Alan paraphrased the Venezuelan national anthem by saying: "Glory to the brave workers of Sidor, who threw off the yoke of Capital" and, referring to the government of president Chávez, he added that it should also follow the example of the workers of Sidor, "in Caracas and in the rest of the country". The event finished with the workers' applause. All available copies of the book were sold (40 were left from previous meetings), and workers bought 90 copies of El Militante, showing great interest in the ideas of the International Marxist Tendency.