International Marxist Tendency
Share
Tweet
Some 200 oil workers from PDVSA listened attentively to Alan Woods launching his book Reformism or Revolution in a meeting which took place in the PDVSA headquarters in Monagas. As Alan said, "The most dangerous enemy of the revolution is within: the reformist Fifth Column."

Some 200 oil workers from PDVSA listened attentively Alan Woods launching his book Reformism or Revolution. Marxism and socialism in the 21st Century (Reply to Heinz Dieterich), in a meeting which took place in the PDVSA headquarters in Monagas. The event started at 9am with a press conference by Alan Woods with the regional and national media, which was then followed by a speech to the workers and finished at lunch time with the official launch of the book with the comrades of PDVSA Oriente management. Many of these managers are veteran leaders of the Venezuelan left who, after many years struggling against the bourgeois regime of the IV Republic, are now heading the country's most important industry.

Between the press conference and the official launch of the book, Alan Woods spoke for an hour, dedicating the bulk of his intervention to rebutting the arguments of the reformists, something which is also the basis of his book: "I wrote this book to answer the reformist ideas of Heinz Dieterich".

Level of consciousness too low to build socialism?

Alan's starting point was a criticism of all those who say that the workers and the people have a low level of consciousness and that Venezuela is not ready for socialism. "I get tired of this miserable song of the reformists", he said.

Alan reminded those present that it had been the people that saved the revolution in April 2002. When the pressure of the reformist sectors led Comandante Chavez to negotiate with the capitalists, they responded with the bosses lock-out in 2002-2003. "These appeals to conciliation and dialogue did not convince the opposition nor the capitalists, nor imperialism, on the contrary, they became convinced that this was a weak government and that they would be able to overthrow it. Weakness invites aggression", stated Alan. "Only the people, the working class, saved the revolution again, while many were hiding under their sheets or were buying air tickets to leave the country".

"The reformists say that we must make an alliance with the bourgeoisie. This policy has already been tried and it has failed. The capitalists, despite having been defeated in 2002 and 2003, went back on the offensive again with the recall referendum in 2004". And addressing the audience Alan asked: "Who defeated the recall referendum in 2004?" "The people!" Shouted the whole audience in unison, breaking into loud applause.

Alan pointed out that, "president Chávez has played an enormous role for the revolutionary movement, and as a Marxist I am grateful for the fact that he was the first one, after the collapse of Stalinism, to raise again the idea of socialism as the way out of capitalism. President Chávez has said that there is no third way between capitalism and socialism. It is socialism or barbarism".

Paraphrasing philosopher George Santayana, Alan stated that, "those who do not learn from history are doomed to repeat it". To attempt to build a mixed economy, as the reformists want (something which Alan unmasks in his book), leads to disaster. Alan said that he is very surprised when he hears talk of economic planning in Venezuela under capitalism. "You cannot plan what you do not control, and you cannot control what you don't own. The capitalists rejected Keynesianism in the 1970s because it led to an explosion of inflation. This is what is happening now in Venezuela. Prices have risen by 30% in a year and what is worse, food prices have gone up by 47%".

President Chavez with the employers

Alan explained his rejection of the meeting last Wednesday, June 11, when President Chávez met with the country's businessmen. In that meeting, broadcast live on national TV, he offered the capitalists a whole number of incentives for production and appealed to them to join in the building of socialism. 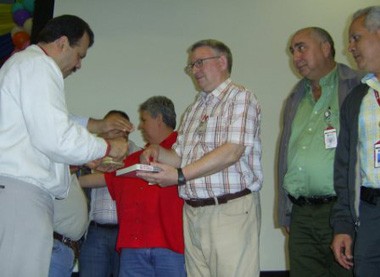 Alan pointed out that at the meeting on June 11, "president Chávez did not convince the capitalists, did not convince the middle class which votes against him", and if it was a strategy to win the elections on November 23rd, "it only served to spread confusion and demoralisation amongst the revolutionary rank and file and the working class. This is due to the pressures of reformist sectors which are endangering the future of the revolution. In this country nothing can be done until Chávez gets rid of all these advisors", stated Alan to loud applause. As he said: "We must win on November 23rd and deliver another blow to the oligarchy and imperialism. This will only be possible if we mobilise and raise the people and the working class, but these kinds of meetings do not contribute to this."

He continued by saying that after ten years of revolution, "one cannot abuse the trust of the masses. The defeat of the constitutional reform referendum in 2007 should set all the alarm bells ringing for the revolutionaries, because it was not the opposition that won, it was we that lost. This shows how there is a growing malaise among the ranks of those who support the revolution, who are demanding decisive measures against the capitalists and the bureaucrats".

Against the attempt of the reformists, Heinz Dieterich and others, to conciliate with the capitalists, Alan Woods defended the idea that in Venezuela the socialist revolution can be carried out immediately, through an "enabling law from president Chavez to expropriate the land, the banks and the big companies, making an appeal to workers and peasants to carry it out on their own initiative." This statement was received with enthusiastic applause by the comrades present. Comrade Alan Woods finished his speech by pointing out that the main obstacle to the revolution is not outside Venezuela, "the most dangerous enemy is within, it is the reformist Fifth Column".

At the end of the meeting many of those present queued up to get signed copies of the new book. Many gave their names and address, expressing an interest in joining the Revolutionary Marxist Current (CMR), in the struggle within the PSUV against the reformists and the bureaucrats.