Francis Smaïl is a CGT shop steward – délégué du personnel – at Air France at the Roissy Charles de Gaulle Airport, near Paris. The history of the persecution he has suffered over many years cannot be told here. But we want to bring most recent developments to the attention of workers, both in France and internationally. 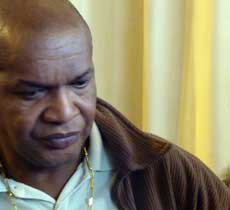 Air France wants to sack Francis, who works in Roissy CDG airport, because of his role in a strike which took place 7000 kilometres away, in Cayenne, in a subsidiary company of Air France, in 2011. Originally from Guyana, Francis is well known among the workers of the colony for his struggles on behalf of the oppressed and the exploited. His is a founding member of the Union of Guyanese Workers; he was approached by striking workers at Cayenne airport while he was back in the country on a private visit, and therefore outside of his working hours.

The case for sacking Francis drawn up by the Air France directors specifically states the fact that the role he played in this strike justifies the termination of his contract. The company blames him – without providing any proof – for material damage caused, it says, in the course of the strike. The Labour Inspectors in France refused to authorise the sacking, but the Minister of Labour authorised it nonetheless.

However, Francis did not give up the cause. He took his case to the Administrative Tribunal and, in December 2012, won the case against Air France. But the company clearly attaches no importance to the decisions of courts of justice. One month later, in January 2013, when Francis came back to work and asked to be reinstated in accordance with the verdict, Air France management informed him of his suspension, accusing him of misconduct in another affair which took place so long ago that it is legally prescribed from two years ago! This suspension means that Francis must now engage in yet another legal procedure against the company.

Air France is waging a war of reprisal against Francis. It is trying to exploit the slightest procedural error and has even initiated legal proceedings against a doctor that signed a sick note for Francis. By multiplying the number of legal procedures against him, Air France is trying to break his morale. And not having succeeded in this, it is depriving him of the means to live. Air France stopped paying his basic wage from the beginning of the procedure. He has been getting just a few hundred euros per month, and the amount paid varies from month to month. This puts Francis in a very precarious position. On several occasions, he has narrowly avoided being evicted from his home.

The Air France bosses are deliberately trying to crush this outstanding working-class militant. The directors of this so-called “traditional airline company” are no better than brutes like O’Leary of Ryanair, well known for strong-arm tactics against any attempt to unionise the workforce.

Militants of the calibre of Francis Smaïl are a serious danger for capitalists in times like these. Because of the declining value of wages, because of the crisis in general, because of the cut-throat competition among the airline companies, the bosses have been striving to cut costs over many years. For workers, this means a constant erosion of their rights and living standards. The past gains of Air France workers are in contradiction with those of the capitalists who run the company. Collective bargaining agreements have been torn up, together with the loss of 8000 jobs.

But Air France directors want to go further than this. They have began to outsource the maintenance of aircraft and airport equipment – precisely the type of work Francis does – in order to cut costs and boost profits. Thousands of workers are under threat from this policy. Their status as Air France personnel will be lost, meaning cuts in wages of up to 20 or 30 per cent over a period. The presence of militants such as Francis Smaïl, capable of organizing and leading hundreds of workers, represents a threat for the capitalists of Air France. That is the reason for all of this persecution.

Francis Smaïl is the kind of hardened fighter whose determination has been forged in the class struggle. Air France must not, will not, defeat him. In attacking the livelihood of his family, in threatening him with being put out onto the street, by taking out law suits against him, Air France bosses are waging a dirty war which has outraged many workers, unionised or not.

We will keep you informed of developments in this struggle. But send your messages of support now to contact@ulcgtroissy.fr.