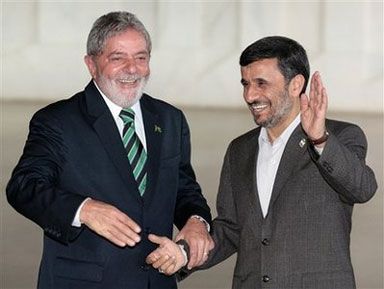 Iranian president Ahmadinejad recently visited Brazil. Some on the left erroneously have developed illusions that somehow his regime should be supported because of its “anti-imperialism”. Here we publish a statement of the comrades of Esquerda Marxista, where they explain that Ahmadinejad is no friend of the working class.

The visit of Iranian president Mahmoud Ahmadinejad to Brazil on November 23, was accompanied by protests in some of the state capitals in the country. What was striking was the diversity of the demonstrators, from human rights groups, to GLBT activists, Zionists and other religious groups. The media highlighted these events and the critics of the current Iranian regime.

The British magazine The Economist, in an article on November 26, summarised well how worried imperialism is about Ahmadinejad’s Latin American tour. The Iranian president would be promoting his image in countries like Venezuela, Ecuador and Bolivia at a time when “he is unwelcome in many countries, and under pressure at home after his disputed re-election”. The magazine adds a warning: “the receptivity” to the “polemical” Iranian leader risks jeopardising Brazil’s attempt to play a more important role in world politics, by giving legitimacy to a government which violates human rights and jails opposition politicians.”

The hypocrisy of the mass media knows no limits. It is a fact; there is serious suspicion of fraud in the last presidential election in Iran. The protests were brutally repressed, leaving 72 people dead and more than 4,000 demonstrators arrested. But similar statistics involving the president of Israel, Shimon Peres, who visited Brazil two weeks earlier, are even more impressive. In 2008, attacks on the Gaza Strip left 1400 Palestinians dead, amongst them 300 children. But none of the mass media dared to call the Israeli president an “assassin”. And what should we say about Obama, who just won the Nobel Peace Prize for sending even more soldiers to Afghanistan?

The conflict [of the Iranian regime] with US imperialism has lead some left wing parties and activists to have an accommodating attitude towards or even sympathy for the regime of the ayatollahs. Obviously, as Marxists, we must defend Iran against imperialist aggression. This does not mean that we should consider the government of that country as an ally of the workers’ movement. It is precisely the opposite. The Iranian revolution of 1979, which overthrew the dictatorship of the Shah Reza Pahlavi, was a genuine mass movement, with the occupation of factories and the land, general strikes and the formation of councils (shuras) of workers, peasants and students.

But the rise of Islamic fundamentalism, between 1979 and 1983, was carried out as a reaction against the deepest conquests of the revolution. Some 30,000 left wing militants were jailed or killed by the fundamentalists. 30 years later, social inequality is on the rise in Iran.

One cannot imagine that the millions who came out on the streets of Teheran this year, in the largest mass mobilisations since the 1979 Revolution, were all part of an Iranian petty bourgeoisie, influenced by the imperialist intelligence agencies, as the ayatollahs claim. This point of view underestimates the independent action of the working class of that country. The masses in Teheran were made up of workers and youth who, as well as fighting against electoral fraud, came out on the streets to fight against the oppression of the national minorities of Kurds and Arabs, the oppression of women; for the recognition of trade union rights, including the right to strike, to mobilise and organise; and for bread, work, healthcare and education for all.

Obama, Ahmadinejad, Peres… It doesn’t matter if they wear a suit, a cassock or a turban, those who sacrifice the working class on the altar of capitalism will always be our enemies.

[Read the original article in Portuguese.]