Malaysia
Share
Tweet
We have received this article from Malaysia about the campaign against the Internal Security Act 1960. The repressive Act is based on legislation introduced by the British imperialists in their struggle against communist insurgency, but 51 years after independence it is still being used by the Malaysian government. The struggle for democratic rights is part of the struggle for socialism and we appeal to all In Defence of Marxism readers to support the campaign.

While Malaysia celebrated its 51st anniversary of Merdeka (Independence) from Britain in 2008, the Malaysian government continued to arrest and detain individuals without charging them or putting them on trial under the Internal Security Act 1960 (ISA), the legacy of a colonial legislation enacted to combat the communist insurgency in Malaya in the 1940s and 1950s. 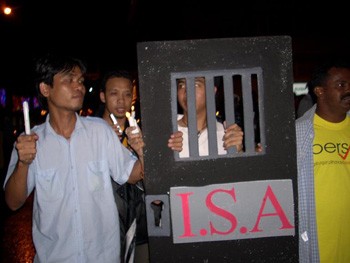 The ISA was originally enacted to succeed emergency laws aimed at combating the communist insurgency in the 1940s and 1950s. It was also used against political dissidents, students, and labour activists. Since then, the ISA has been used against those who commit acts deemed to be "prejudicial to the security of Malaysia" or threatening to the "maintenance of essential services" or "economic life." The government determines which acts fall into these categories and, using a strained interpretation of the legislation, has detained scores of individuals under the ISA in cases that would normally require prosecution.

Under the ISA, detainees are subject to an initial 60-day detention period in special police holding centres, allegedly for the purpose of investigation. No judicial order is required for such detentions. The locations of these holding centres are kept secret, and detainees are transported to and from these centres in blindfolds. Visits by family members are purely discretionary and, contrary to Article 5(3) of the Federal Constitution, detainees are denied access to lawyers. During the initial detention period, detainees are commonly subject to torture and other cruel, inhuman and degrading treatment. 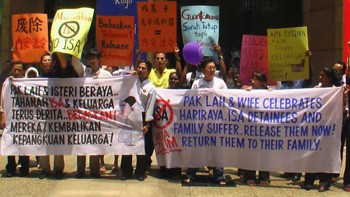 At the end of the 60-day period, the Internal Security Ministry may release a detainee on restrictive orders, or order further detention without trial for a term of two years. The ministry can renew the two-year detentions indefinitely. Detainees may also be released with or without conditions at any time during detention. Conditions can include restrictions on activities, movement, residence, and employment; orders to remain indoors during certain hours; and prohibitions against holding public office or taking part in political activities. Detainees who are issued two-year detention orders are held in the Kamunting Detention Camp (KDC) in Perak.

The AIM which is better known in Malaysia as Gerakan Mansuhkan ISA (GMI) is a coalition consisting of 83 organisations made up of non-governmental organisations, political parties, human right bodies, labour unions, women and student movement. It was launched on 30 April 2001 when 10 human rights activists (reformist or reformasi) were detained on unproven charges. 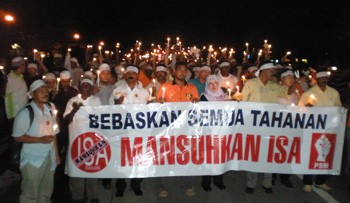 The two main objectives of GMI are to work towards the abolishment of ISA and to demand for the release of all ISA detainees on the premise that no one should be detained without trial.

In order to achieve these objectives, the GMI has launched several campaigns to create public awareness through press statements, exhibitions, demonstrations, forums, intellectual discourses, signature campaigns, publishing of books, distribution of pamphlets etc. Other key elements employed for the publicity of the GMI campaign include lobbying at the national and international level, filing legal proceedings, establishing the Family Support Centre, communicating with the media, fund-raising etc.

Since then the GMI has been successful with support from the public:

At the time of this writing, around 64 ISA detainees, alleged to be JI militia men, and many more detainees are still suffering in Kamunting Detention Centre and they were also detained without trial there.

What you can do?

1. Send a model letter per post, Fax or e-mail to the Malaysian Government

Email: ppm@pmo.gov.my
(With a copy to suaram@suaram.net)

Re: Appeal for the immediate release of ISA detainee's and call for abolishment of the ISA

I am writing to strongly urge you to immediately release of all the ISA detainees who have been detained without trial under the Internal Security Act (ISA).

ISA detainees must be given recourse to a fair trial in conformity with international standards of due process and access to full legal representation and family members. If no evidence is found against a detainee, he/she should be released without delay, as holding them indefinitely merely on the basis of suspicion is a blatant violation of due process. I am also quite concerned about the fact that the ISA detainees have been physically abused and harassed in the past and are being forced to live in small cells and under strict regimes. I ask that you ensure that all the ISA detainees are treated according to the international human rights standards.

Human rights organizations and NGOs should be given immediate and full access to the Kamunting Detention Centre. Most importantly, I strongly urge you to abolish the ISA under which many such innocent people have been held in the past and are still being currently detained without charge, or legal representation, merely on the basis of suspicion.

I look forward to hearing from you on this matter,

2. Address for material to be sent to ISA detainees in Kamunting Detention Camp

You can write letters of support to ISA detainees at the address below: