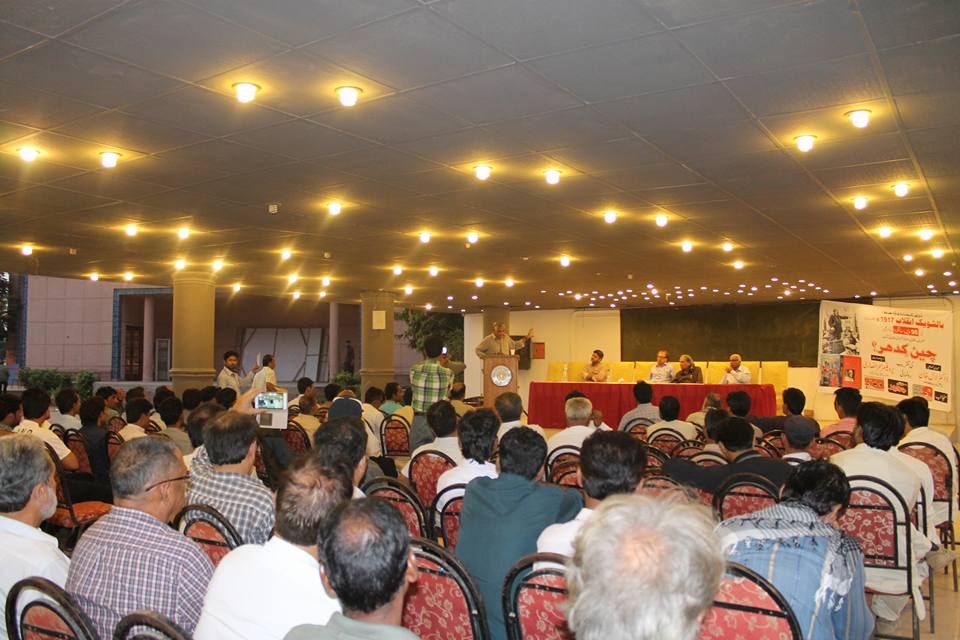 The Progressive Youth Alliance in collaboration with the Pakistan Trade Union Defence Campaign organized activities on the eve of the 98th anniversary of the Bolshevik Revolution in many cities of Pakistan.

A public meeting was organized at the Karachi Arts Council. At this occasion Lal Khan’s book “Whither China?” was also inaugurated. The meeting was presided by Professor Sehar Ansari while Dr. Lal Khan was the chief guest. Other speakers at the occasion were famous column writer Najm ul Hassan Ata, Dr. Jafar, Manzoor Razi from Railways, Labour leader Ayub Qureshi, student leader from BSO , Zareef Rind, and PYA organizer Karachi Tassawar Qaisarani. Comrade Paras Jan was the stage secretary. Workers from Pakistan Steel and other industries were present at the occasion along with students from various educational institutes of Karachi. 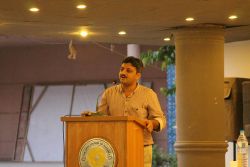 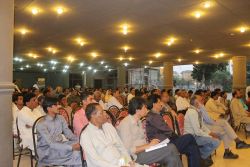 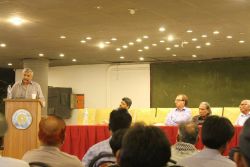 The speakers said that the Russian Revolution changed the course of history and for the first time  the majority came into power. This  new society was built on socialist principles and all the vices of past were removed. The speakers also discussed the crimes of Stalinism and the degeneration of revolution. The Chinese revolution of 1948 and the crisis of the Chinese capitalist economy in the present epoch were also discussed.

A public meeting was held in Hyderabad press club to commemorate the Russian Revolution of 1917. The meeting was presided by comrade Adam Pal while other speakers include Paras Jan, Anwar Panhwar, writer Aftab Khanzada, Railway workers leader Abbas Leghari, and Comrade Babar from Sialkot and others. Comrade Rahul was stage secretary.

Speakers discussed the plight of working class in Pakistan and the need to overthrow capitalism here just as the Bolsheviks did in 1917.

A public meeting was held on Gurdwara Road in Sukkur. Speakers at the occasion include Adam Pal, Ijaz Bhagio, Saeed Khaskheli, and Ghazali from PTCL workers. Student leaders from various progressive organizations were also present at the occasion. The speakers highlighted the achievements of the Bolshevik revolution in a backward country like Russia and how the living conditions of  the Pakistani working class can be transformed by socialist revolution. Comrade Ahsan Jaffery chaired the meeting. 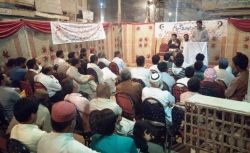 A public meeting was held in Rahim Yar Khan Press club. A large number of workers from Unilever, Coca Cola and other trade unions participated in the meeting . Comrade Haider Chughtai chaired the meeting while Adam Pal presided it. Other speakers include secretary general of PTUDC Qamar uz Zaman Khan, secretary general of IUF Pakistan Said Zaman, Mehboob Khan of APCA, Dr. Amjad Aziz from YDA and others. Comrade Kajal was also present at the occasion.

The speakers highlighted the problems faced by people in Pakistan and the bankruptcy of all political parties. They emphasized the need for revolution to save humanity from these barbaric rulers. 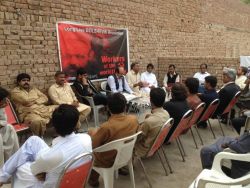 A meeting was organized at the occasion presided by a worker from WAPDA, Tariq Chaudhary. Naddem Pasha chaired the meeting.  Speakers include PYA organizer Imran Kamyana, Ilyas Khan Advocate, Zeeshan Shahzad and others. Speakers highlighted the importance of the Russian revolution in the present epoch and explained the barbarity of the US and other Imperialists in Middle East. They emphasized the need for a socialist revolution to overthrow this blood thirsty Capitalist system.

A meeting was organized to commemorate the Bolshevik Revolution of 1917. The speakers at the occasion were Umer Rasheed, Ammar, comrade Ismat and central organizer PTUDC Rashid Khalid. The speakers discussed the revolutionary role of working class  in the cities and how the Russian Revolution of 1917 is the beacon of hope for all ongoing struggles of the working class. 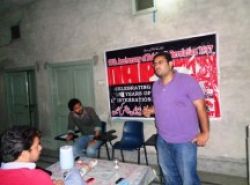 A public meeting was organized by the Progressive Youth Alliance at PILAC Auditorium under the title “Youth and Revolution”. PYA Lahore organizer Dr. Farhan Gohar opened the discussion and highlighted the problems faced by students today. Other speakers at the occasion include Qasim from FC College, Awais Qarni and Faiz from GC University, Saad and Usman Zia from UMT, Sana and Mustehsan from UCP, Imtiaz from Punjab University, Hassan from UoL, Zain ul Abideen from UET, Dr. Ejaz, Dr. Waqar from YDA,  Maqsood Hamdani from WAPDA, Amir Kareem, Amir Khan, Adeel Zaidi and others. Dr. Aftab Ashraf summed up the discussion, while Dr. Yasmeen Zahra chaired the meeting.

A meeting was organized by PTUDC Kamoki in Khan town. The meeting was chaired by comrade Zahid Baryar while Adam Pal was the chief guest. Other speakers include Rashid Khalid and comrade Gulzada Safi. Young workers and students were present at the occasion. The speakers explained the achievements of the Russian revolution of 1917 and the need of a socialist revolution for the downtrodden people of Pakistan.

A meeting was organized at the hall of Bar Association of Lawyers to commemorate this important event in human history. Comrade Rashid Khalid gave the lead off while comrade Umar Shahid chaired the meeting. Comrade Muhammad Ibne Sana, Nasir Butt and others contributed in the discussion which explained the importance of this revolutionary history. 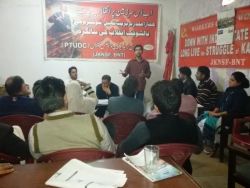 A meeting was organized under the title “this land needs a revolution now”. The meeting was chaired by Ayaz Mahmood while Tauseef Farooq opened the discussion. Other speakers include Ahmad Ammar, Suhail AKhtar, Amin Lashari, Raja Imran from Railways, Farhad Gadi, Rehana Akhtar, Asif Rasheed, Changez Malik, Ishaq Meer and Hassan. Comrade Tauseef summed the discussion. The meeting ended with the singing of Internationale.

A meeting was organized by the JKNSF at this occasion. Comrade Dilawer chaired the meeting while comrade Marwat gave the lead off on this topic. Comrade Mujtaba, Jameel,Amjad Butt, Ahmad, Saqib and Naveed Ishaq contributed in the discussion. The meeting ended by the singing of Internationale.