Austria
Share
Tweet
On Saturday the "Der Funke" Marxist tendency organised a big event with Trotsky's grandson, Esteban Volkov, as special guest, to commemorate and celebrate the 90th anniversary of the 1917 Russian Revolution. Around 200 people came to listen to the speeches in defence of "Red October" and between 400-500 celebrated all night long at the party that was organised after the meeting. 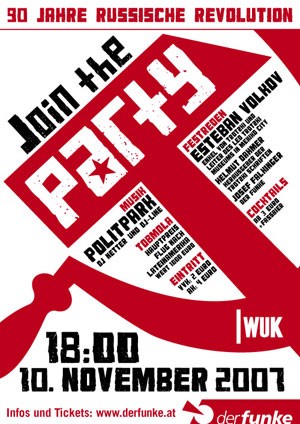 On Saturday the "Der Funke" Marxist tendency organised a big event with Trotsky's grandson, Esteban Volkov, as special guest, to commemorate and celebrate the 90th anniversary of the 1917Russian Revolution. Around 200 people came to listen to the speeches in defence of "Red October" and between 400-500 celebrated all night long at the party that was organised after the meeting.

The event started with a seminar of the Marxist Tendency with discussions and workshops on "What the Bolsheviks really stood for", "Why the Russian Revolution degenerated", "The role of the Soviets" where we also presented our new book on the Russian Revolution, which is a compilation of several texts, including a translation of Alan Woods' text "The Bolsheviks in 1917", an extract from his book "Bolshevism, The Road to Revolution" and articles by Lenin, Trotsky, Gramsci and from the Austrian Social Democratic paper "Arbeiter-Zeitung", plus a critique on the anarchist view of the events in Kronstadt 1921. Another workshop dealt with the events in Pakistan where concrete solidarity activities were planned.

After the seminars all comrades present participated actively in the preparation of the public meeting and the party. It was a great collective achievement to decorate the hall, to prepare the bar, the food, to arrange the bookstall, to help the band, etc. It was a marvellous example of revolutionary spirit. Everybody was expecting that this evening would be something special.

We were conscious of the fact that we had to swim against the stream in celebrating the Russian Revolution.. We were the only ones who were prepared to organise a big event to celebrate the October Revolution and to defend its ideas and achievements.
In the two weeks prior to the event the whole Tendency worked to make this event a big success. The whole city was fly-posted; comrades gave out leaflets and sold tickets fort the raffle. The event was omnipresent at the university, in the metro stations and in the most important public places.

Esteban Volkov arrived in Vienna two days before the meeting. He lived in Vienna for two years when he was a child after his stay in Prinkipo with Leon Trotsky and Natalia Sedova. For Esteban this trip to Vienna was in a certain sense also a return to his own past. We also showed Esteban the places where his grandfather lived and worked when he was in exile in Vienna between 1907 and 1914. 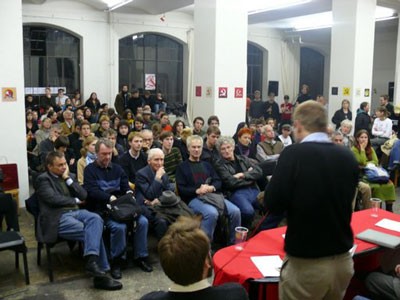 We also managed to arrange an exclusive interview for him with "Der Standard" (in German) in which he explained his role in defending Trotsky against Stalinist slanders. This paper is one of the most important daily papers in Austria and especially its weekend issue, which is free, has a very big circulation. At the end of the article there was also an advert for our meeting with Esteban Volkov.

The event took place in the WUK, an old factory building near the centre of Vienna, which is one of the most important alternative cultural venues in the Austrian capital. When the meeting started it was completely full. Up to 200 people attended the meeting which was much more then we had expected. Many people had to stand or sit on the floor. It was the first public political meeting for many many years within the Austrian Left where one had to pay an entrance fee.

The first speaker was Josef Falkinger from "Der Funke". He outlined the events in 1917, defended the Russian Revolution against its critics and highlighted the most important lessons for today's generation of revolutionaries. At the end he called on the audience to "join the party" and to build together with us a strong left wing within the Labour movement.

He was followed by Helmut Dahmer, a university professor and journalist, who plays a vital role in publishing Trotsky's works in German. His speech was also a very good defence of the revolution. Compared to many other left-wing intellectuals he still stands for a revolutionary perspective. For this event "Der Funke" also published a new pamphlet by Helmut Dahmer on the life and writings of Trotsky. We hope in the future to deepen this important collaboration.

Then Esteban Volkov opened his speech. He gave a very interesting insight into his life 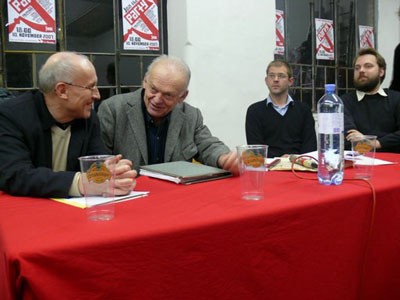 and the struggle of Leon Trotsky and his comrades against Stalinism. This was probably the biggest meeting ever in Austria where the role of Trotsky, the most important leader of the Russian Revolution next to Lenin, was highlighted.

After two hours of political speeches the party started with a concert by "Politpark", a left wing band from Linz. Their concert was a marvellous musical introduction to the history of the revolutionary movement. It lasted until 4 o'clock in the morning with more then 400 paying guests. There were comrades from all the left-wing tendencies within the Socialist Youth, from the Socialist Students, the Communist Youth, students and young workers. There were people not only from Vienna but also from Lower Austria, from Upper Austria, from Styria, Salzburg, Tyrol and Vorarlberg. One comrade even came from Bologna to take part! Everywhere people were discussing and enjoying the event. Another highlight was the raffle at midnight. The main prize was a trip to Latin America worth 1000 Euros. The other prizes were books, t-shirts, etc. The raffle was a big success and will be repeated next year.

At the bookstall political material ton a value of more than 800 Euros was sold during the party. At this event several comrades responded to the main slogan literally and agreed to join the Marxist Tendency. Many people left their addresses saying they want to become active.

Once again, the comrades of Der Funke have shown that they are the only viable political tendency in Austria that can offer an organised expression to the will of those people who are looking for a revolutionary change. After the meeting of 5000 people with Alan Woods, Aleida Guevara and Hugo Chavez in Vienna on 12 May of last year ‑ the biggest anti-imperialist meeting in Austria for decades ‑ this year the comrades organised the only visible public meeting to commemorate and defend the traditions of Red October. Basing ourselves on this experience, we will build a strong Marxist tendency with deep roots in the workers' and youth movement.

You can see more photos here.