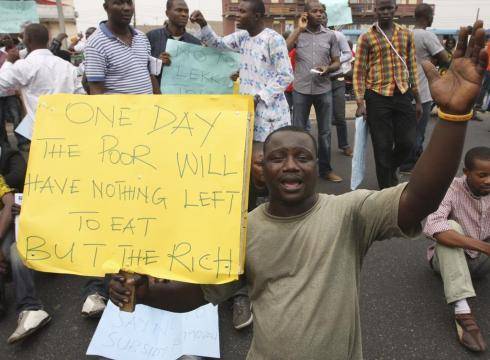 In Britain, a handful of super-rich plutocrats control our lives. On a world scale, according to Oxfam, a mere 85 top billionaires, who could all comfortably fit into a double-decker bus, own more wealth than half of the world's population put together.

The rich are filling their pockets. While the top one percent in Britain now take 10p in every pound of income paid, the bottom 50 percent receive just 18p.

The High Pay Centre revealed that while the average wage was about £26,500, chief executives of the FTSE 100 each took home an average of £4.3 million in 2012. While most workers do not even earn the "average wage", this still means that our top bosses need to "work" for just 24 hours before they had earned more than the average worker in a whole year.

Tesco made a pre-tax profit of £2 billion in the last financial year and paid its boss Philip Clarke £1.2 million, Sainsbury's made £788 million and gave its boss Justin King £4.3 million. Neither company pays a "living" wage to its employees, who need to claim tax credits. This means that our taxes effectively subsidise their profits by topping up rock-bottom pay.

The working poor is rising fast as living standards plunge. Research shows that about a fifth of those who use food banks do so because of low pay. Millions are forced to rely on tax credits to survive. But even this source of income is being cut by the Coalition, who have refused to upgrade the benefit even by the rate of inflation.

This has resulted in a growing gulf between the rich and the rest of society. According to Natalia Alonso, the head of Oxfam’s EU office: “The gap between rich and poor in the UK and Spain could soon become the same as in South Sudan or Paraguay.”

This once again confirms Marx's famous statement of increasing misery for the working class. This claim was constantly ridiculed by the defenders of capitalism and the reformists in the labour movement. Today, Marx's prognosis is being graphically confirmed on a daily basis.

Capitalism means growing inequality. With the crisis, the capitalist class seeks to squeeze more unpaid labour out of the working class. It seeks to slash the "social wage" and the welfare state. That is why they are planning to slash public spending to the level of 1948. In other words, all the reforms that we gained in the post-war period are to be destroyed.

Rather than being on the defensive, the trade unions need to go onto the offensive. Rather than making deals to cut wages, they need to organise effective coordinated action. This means linking all struggles together. Above all, they need to link the fight over pay and conditions with the need to overthrow capitalism.

Only with such a programme can we build a movement that can get rid of this Coalition of the rich and the dog-eat-dog society they stand for. This means fighting for socialist policies.