International Marxist Tendency
Share
Tweet
Over the weekend, June 13-15, the Venezuelan Revolutionary Marxist Current (CMR) held its 5th Congress at the Inveval factory - presently being run under workers' control. One hundred comrades attended the congress, where all the reports confirmed significant growth over the past year, both in terms of numbers and influence within the Bolivarian movement and the wider workers' and youth movement. 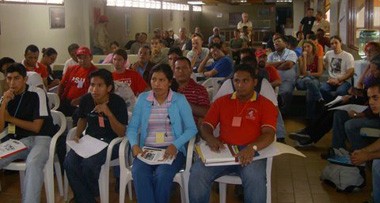 On Friday, June 13, the 5th Congress of the Revolutionary Marxist Current (CMR) opened at Inveval, the factory that was occupied by the workers, nationalised and now run under workers' control. Total attendance during the three days of the meeting reached 100, including delegates, comrades and guests. The composition of the congress was varied, with a large number of youth and also important trade union representatives, including Luis Primo from the Caracas-Miranda Coordination of the UNT, leading trade unionists from the auto industry in Anzoategui (from Mitsubishi and Vivex, with a combined workforce of 1300 workers), from the building workers' union in Vargas and from the occupied factories Inveval and INAF.

This congress showed the important advances of the CMR over the last year, in which the organisation has doubled its membership and set up new cells in four new states: Maturin, Anzoategui, Táchira and Maracaibo. There were comrades present at the congress from Caracas, Vargas, Miranda, Mérida, Maturín, Estado Bolivar, Anzoátegui, Táchira, Aragua and Zulia.

The mood in the congress was electric. It was opened by Francisco Rivero, a known revolutionary leader in the Vargas state, who underlined the political importance of the situation in the country. The first day of the congress was dedicated to discussions on World and Venezuelan perspectives. Alan Woods gave the main lead off for about an hour and a half. He dealt with the international situation stressing the economic crisis and its effects on the class struggle worldwide. He explained how the price of basic foodstuffs has doubled since 2005 with disastrous effects, including riots and destabilisation in a number of countries. According to the Interamerican Bank of Development the increase in food prices will push 26 million people into extreme poverty. Despite the economic growth in the last period, the masses of Latin America have not benefited at all. Peru's GDP for instance is now 45% higher than in 2001, but 30% of children suffer from malnutrition and in some areas the figure reaches 90%, even before the onset of the current economic crisis. "The last two decades represented the best that capitalism had to offer to the masses, what is going to happen with the recession?" asked Alan.

Talking about the current situation of the Venezuelan Revolution Alan made a sharp criticism of the policies of reformism, and particularly of the meeting held between Chávez and the Venezuelan businessmen last Wednesday. "This policy will not serve to increase private investment. The capitalists will continue with the strike of capital. Weakness invites aggression. Inflation will continue to grow. It has already reached 30% and the prices of food products have gone up by 47%".

"Partial nationalisations are no solution in themselves" he warned. "They will make the normal working of the capitalist system impossible and will aggravate the crisis. You cannot make half a revolution. What is needed is to carry out the expropriation of the oligarchy. This message is already getting an important echo among wide layers of workers, peasants and youth and among the ranks of the PSUV, and this is the explanation for the rapid growth of the CMR".

Alan's speech was received with enthusiastic applause by those present and was followed by a very interesting and lively discussion with the participation of many comrades.

On the following day, Saturday, there was a discussion on organisation led off by comrade Miguel Campos, who explained the important advances of the Current over the last four years, since we started with a handful of comrades, to a position where we now have members in many of the country's states. Amongst other things Miguel underlined the international character of the CMR as the Venezuelan section of the International Marxist Tendency. "We are not a Venezuelan revolutionary organisation, but part of an international organisation." He also outlined the targets for growth for this year, which are to reach 200 comrades. "The enormous impact of Alan Woods' new book Reform or Revolution, Marxism and Socialism of the 21st Century ‑ a reply to Heinz Dieterich will help bring the best revolutionary militants into our ranks, since they will find in the ideas of the CMR a clear answer to the ideas of reformism which threaten to derail the Venezuelan revolution".

During the discussion, comrade Julio Ulloa, from Barcelona (Anzoategui), explained the important roots of the CMR in the auto industry in Anzoategui. He stressed the importance of the method of building a revolutionary organisation. "Organisation reflects revolutionary politics, not the other way round", he said.

Freddy Acevedo from Tachira, a delegate to the PSUV congress who was selected as one of the 69 candidates to the party's national leadership getting 9,000 votes throughout the country, and also a member of the PSUV leadership in Táchira, explained that what was interesting during the PSUV congress was to see how many delegates already knew about our ideas and many asked "What is the opinion of the CMR? What is Alan Woods saying?" We received 9,000 votes on the basis of an openly Marxist platform and this shows how our ideas connect with the rank and file which is becoming increasingly dissatisfied.

Nelson Rodriguez, from Inveval, made an excellent intervention explaining the importance of the ideas of the CMR in order to sustain Inveval under workers' control despite the sabotage of the bureaucracy. The workers, in spite of maintaining the plant active, are finding it very difficult to produce for lack of raw materials. "Without the ideas of the CMR we would not have been able to consolidate the Factory Council and workers' control: the same thing would have happened as at Invepal and other factories where the workers lost control".

Many other comrades spoke, among them many of the youth. The political level of the debate was truly remarkable, showing the patient work of educating revolutionary cadres carried out by the CMR.

Sunday, the last day of the congress, started with a lead off by comrade Euler Calzadilla about the need to educate cadres and a balance-sheet of the publications of the CMR. He stressed the importance of having acquired last year a copy-printer which allows us to publish leaflets and educational pamphlets. "The publishing of material is of key importance for the education of all CMR members. Only on the basis of an understanding of the ideas of Marxism can we build a genuine revolutionary Marxist tendency within the PSUV".

Two commissions followed this discussion, on finances and the press. Comrade Jose Antonio Hernandez introduced the finance session, explaining the important advances made, having already raised by June 2008, 85% of what was collected in the whole of 2007. Thanks to the comrades' contributions we have been able to finance two additional comrades to work full time for the organisation since the last congress.

Regarding the press, comrade Leonardo Badell explained how 8 issues of the paper had been published since the previous congress and the number of pages had increased from 16 to 24. The target was to make the paper monthly and that the cells should send more articles on a regular basis.

At the end of the session the documents on World Perspectives and Venezuelan Perspectives were voted and passed unanimously by the delegates. The 30-strong incoming Central Committee was also elected unanimously as well as the delegates to the world congress of the International Marxist Tendency which will take place in Spain this summer.

In the afternoon, comrade Alan Woods closed the congress, underlining the mood of enthusiasm present in the gathering which was the reflection of the advances of the CMR. He also outlined the work of the IMT, explaining how 10 years ago we only had comrades in one country in the whole of the American continent and we now have groups in nine. Paraphrasing Ted Grant, the late leader of the IMT, he said that "with enthusiasm we will achieve everything". "The key to the successes of this International are based on the struggle for the defence of the genuine ideas of Marxism against all other tendencies internationally" said Alan.

The congress ended in a joyous mood with the singing of the anthem of the international working class: the Internationale.