Details
In Defence of Marxism
30 September 2015 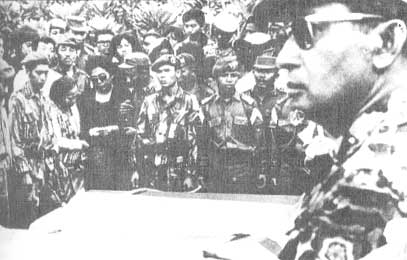 In the early hours of 1 October 1965 a group of "progressive army officers" kidnapped and brutally murdered six army generals, apparently in preparation for a coup. At the time, they were alleged to be in sympathy with the Indonesian Communist Party (PKI). In reality, the “30 September Movement” was a provocation orchestrated by the anti-communist General Suharto to justify a coup against the Indonesian leader Sukarno, with the active support of the US and British secret services.

Suharto subsequently used the 30 September Movement’s alleged links with the PKI as the pretext for the massacre of the PKI leadership, members and alleged communists - a total of up to 1 million people. The Suharto coup has been described by the CIA itself as “one of the worst mass murders of the twentieth century”.

To commemorate these events we are encouraging our readers to read/re-read an article written by Alan Woods describing the situation in 1965, Revolution and Counter-revolution in Indonesia and a review of the excellent documentary “The Act of Killing”.