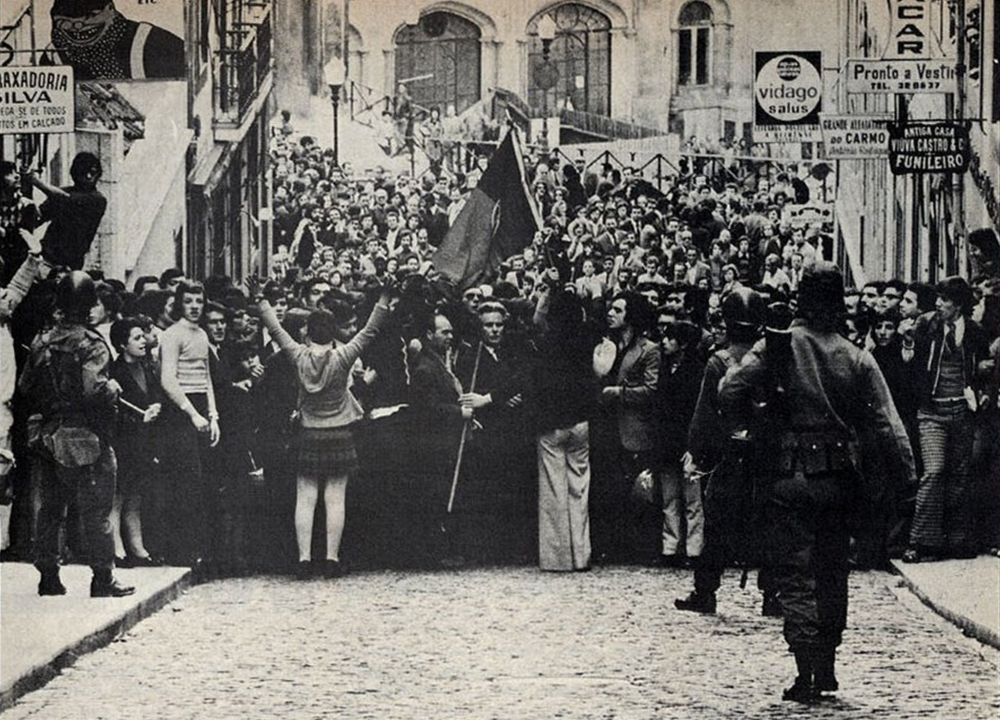 On Thursday 25 April, celebrations took place all over Portugal to mark the 45th anniversary of the day the hated Estado Novo dictatorship was felled. In Lisbon, around 20,000 people marched in the annual parade of workers’ and youth organisations, while thousands more lined the pavements of Avenida da Liberdade to join in the festivities. We publish here a report of the event by our Portuguese comrades, along with the text of pamphlet they produced for the occasion. You can find more detailed analyses of the revolution here and here.

The Communist Party youth and PCP-dominated CGTP were out in force, accompanied by all manner of smaller blocks, from antifascists, to a group calling for 1 percent of the national budget to fund the arts and cultural initiatives.

Impressively radical slogans rang out from megaphones, calling for “a new April” and a continuation of the revolutionary struggle, along with crowd favourite “25th April forever, fascism nevermore!” Meanwhile, Zeca Afonso’s song ‘Grandola Vila Morena’ – which famously acted as the radio signal to launch the revolution – played periodically, alternating with the CGTP anthem.

The lack of enthusiasm with which the rank-and-file of the parade joined in the slogans and songs of Portugal’s great revolutionary traditions illustrates how the leadership of the Portuguese left has reduced these traditions to an annual routine. The PCP’s championing of the Carnation Revolution stands in stark contrast to the party leadership’s de-escalation of numerous strikes against poor working conditions over the last three years – indeed, its outright hostility to strikes it does not control.

A call for revolutionary struggle to continue rings hollow when the willingness of the Portuguese class to fight the counter-reforms still being imposed on them is cut across by the leadership of the very party making this call. And it is outright contradicted when the minimal gains which have been won – such as free school textbooks for certain (but not all) years of study – are used to justify the PCP’s inactivity on the streets and parliamentary manoeuvres with the governing Partido Socialista.

The PS’ own youth block on the parade was characteristically small, with placards calling for more student halls of residence at universities. This demand for temporary student housing is dwarfed by the PS government’s overall neglect of education funding, which has led to multiple waves of strikes among high school teachers and higher education workers over the past twelve months, and their role in deepening the housing crisis disproportionately affecting Portuguese youth. There was barely any sign of Bloco de Esquerda at the celebration – further evidence that the party leadership has effectively dissolved its active base as it prepares an alliance with the PS in the general elections later this year.

On the other hand, the union of the National Republican Guard, a branch of the police with military status, had a sizeable block in the parade. The irony of this police force, whose headquarters had served as the last refuge of the Caetano dictatorship, marching directly in front of an antifascist block, only months after the Lisbon police waged war on a black ghetto in the city’s suburbs, reflects the extent to which the 25th April event has been diluted.

The only way to reclaim it for the Portuguese working class is for the left parties and trade union leadership to honour the slogans of the revolution in deeds as well as words. A mass campaign prior to this year’s election, mobilising workers and youth against the government’s continued implementation of the 2011-12 emergency budget and precarious working and housing conditions, would make next year’s celebration a far more vivid invocation of the spirit of 1974.

This year’s event did mark the first time IMT comrades in Portugal had held a stall in public. We produced our own pamphlet, with short articles on the Portuguese Revolution and the current situation facing the working class here, which received a lot of interest. We also sold a considerable amount of material, kindly provided by our Brazilian comrades.

Many greeted our presence at the celebration as a pleasant surprise. One veteran of the Portuguese left expressed to us his optimism at the fact that there are young people openly defending and promoting the ideas of Marxism, at a time when the rest of the left is at best paying them lip service. Our task now is not only to espouse Marxist ideas, but to build an organisation capable of taking them into the Portuguese labour and student movements, helping to take the struggles of workers and youth to a victorious conclusion.

45 years ago, the Armed Forces Movement, with the support of the Portuguese workers, finally succeeded in ending the "long night", and defeating the fascist dictatorship that had ruled for 48 years, following widespread opposition to the regime, which had long been in decline.

In the years of the dictatorship, the working class was exploited like never before. Unemployment and the miserable living conditions in the countryside pushed the peasants into overcrowded cities, which were filled with slums, disease and widespread poverty. Women in particular received much lower wages than men, without the right to maternity leave. There were no free elections, and any opposition to the regime was suppressed by PIDE with exile, arrest, torture or death.

The bourgeoisie used fascism as a weapon to destroy workers' organisations. And fascism was a reliable weapon, capable of imposing, through violence, the power and order of capital both in Portugal and in the colonised territories.

However, on 25 April 1974, it was not only the end of the dictatorship but also the inauguration of an intense, 19-month revolutionary period, where the working masses came onto the scene. More than the MFA's role in overthrowing the regime, it was the actions of the Portuguese workers in struggle that accomplished "April 25".

The formation of workers' commissions in the factories and businesses that broke the authority of the regime, occupied factories and instituted self-management; the commissions of residents who occupied buildings to house needy families, to create public daycare centers and cultural associations; the striking workers who fought incessantly for decent living conditions - these are stories rarely told by the ruling classes or the media. This is because they want to stifle this memory of struggle, in which the Portuguese workers "touched power."

Long live the 25th of April!