From 29-31 March, over 80 workers and youth gathered in Gothenburg to discuss the national and global political developments erupting across the world. Quantitatively, this was the largest congress for the Swedish section of the IMT; and qualitatively, this was a milestone for the section. Political discussions were sharp and thorough, and a high level of enthusiasm to build the forces of Marxism in Sweden was evident during the entire weekend.

Read the original in Swedish at Revolution |

The meeting opened on Friday, with a discussion on the perspectives for the world revolution. Niklas Albin Svensson who introduced the session explained that since the crisis of 2008, none of the underlying conflicts have been solved, rather, we are charging towards a new international crisis. Global debts are historically high and the underlying problem of overproduction has only been exacerbated.

All around the world, capitalists attack workers’ wages and conditions in an attempt to make the working class pay for the crises. This has led to extreme social and political instability. Brexit is one of the many expressions of the fragmentation of the ruling class in multiple countries. In countries such as France, the UK, and Algeria, years of austerity and crisis have brought to the surface social anxiety, political ferment, and class struggle. 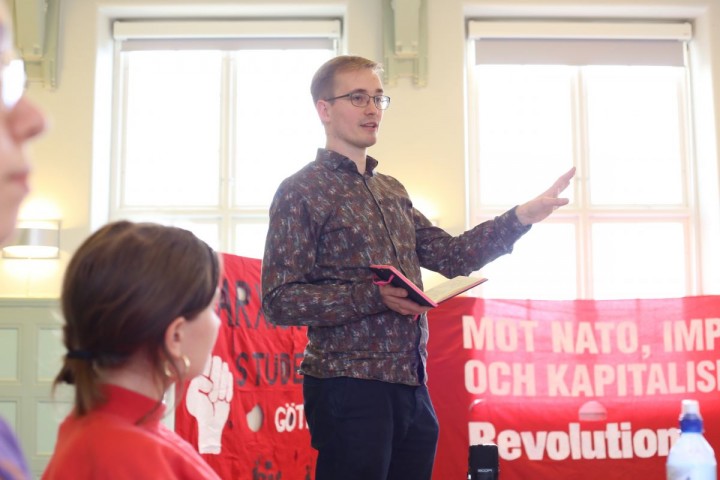 80 workers and youth gathered in Gothenburg to discuss the national and global political developments erupting across the world / Image: Christofer Bengtsson/Revolution

We are well into the most turbulent period in the history of capitalism. In this process, workers and youth will draw more and more revolutionary conclusions since there is no alternative on a capitalist basis. Marxists must join the struggle and offer the only possible solution: for the working class to seize power in a socialist revolution.

The situation in Sweden

Saturday opened with a discussion on the situation in Sweden. Editor of Revolution, Stefan Kangas, opened the discussion on the turbulent political and economic crisis in Sweden. Stefan explained that over 30 years of austerity has led to an overall dissatisfaction within the working class, which is shown through the historically low confidence for the Social Democrats as well the traditional bourgeois parties. This is what led to the split between the right-wing parties and the four months that went by after the election before the Social Democrats were able to scramble together a government. 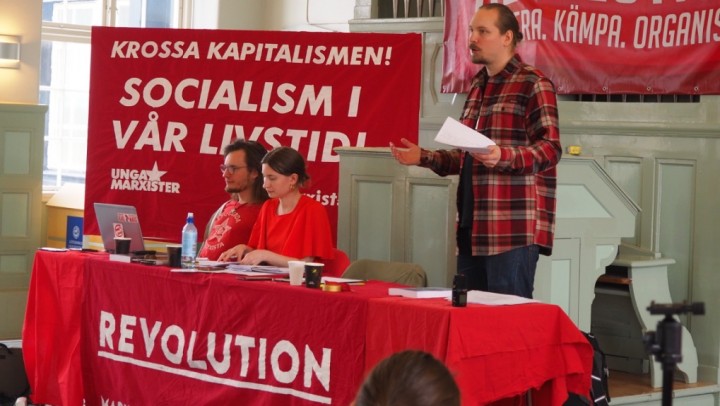 In an attempt to make the Swedish working class pay for the crisis, the workers are forced to work harder for the same pay. In the discussions, several examples were highlighted showing the increased pressure in the workplace and several of the attendees gave examples from their own jobs. Workers from Volvo, Husqvarna, and Nya Karolinska Hospital described how their working conditions are deteriorating.

The increased pressure has led to stress and deteriorating mental health, and the situation is especially difficult for young people who often have insecure employment. A young service worker and member of the organisation portrayed how she and her colleagues live in constant fear of not being able to afford their rent at the end of the month. She has also witnessed a growing discontent in her workplace. 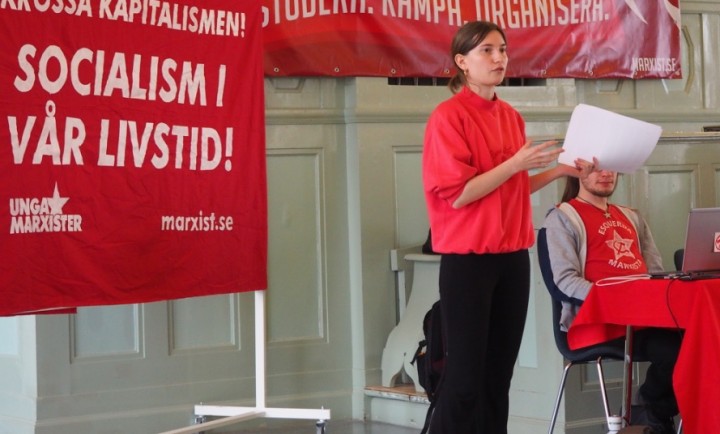 Amongst young people, we see a growing radicalisation, which is expressed through the recent climate strikes and the student strike to stop deportations of refugees / Image Anna Quiroga Hällstig/Revolution

The level of membership in the Swedish labour organisations is amongst the highest in the world and the Swedish unions are a powerful weapon in the class struggle. But despite the vast discontent under the surface, Sweden has one of the lowest number of strike days in the last 10 years worldwide. In Norway and Finland we have witnessed major strikes these past years, but not in Sweden. Despite seeing examples of working-class militancy, such as the striking garbage collectors, nurses’ struggles for higher pay, and the struggle against the closure of the maternity ward in Sollefteå, there has been no initiative to unite the struggles by the different unions. The problem is that the union leadership restrains and refuses to lead the struggle, and instead seeks to compromise with the capitalists at the top.

Amongst young people, we also see a growing radicalisation, which is expressed through the recent climate strikes and, previously, the student strike to stop deportations of refugees. Again, the problem is that the labour movement offers no leadership, but leaves it up to the youth to take the struggle against all the different expressions of capitalist decay.

But sooner or later, mass struggle will break out, not just isolated struggles but national mass movements. The main conservative party, Moderaterna, recently explained in Dagens Industri (15 August) that Sweden risks cuts of 330 billion SEK if there is a new, big crisis. Such massive cuts would lead to explosions of class struggle, just like in other countries.

Faced with such movements labour leaders will be either be forced to act by the pressure from below, or the struggle will spontaneously break out from below and move outside of the traditional labour organisations, as we have seen in France with the yellow vest movement.

Sweden may seem calm on the surface. But sooner or later, mass struggle will break out, not just isolated struggles but national mass movements / Image: Anna Quiroga Hällstig/Revolution

Sweden might still appear to be calm, but beneath the surface strong tides are moving. In the coming period we will see in Sweden, as we have seen in other countries, eruptions of class struggle and a deep economic crisis, with big attacks against the working class. And that will send shockwaves around the world. This will be a big refutation to those who, like Bernie Sanders in the US, try to point to the Swedish welfare state as an example of how it is possible to have capitalism with a human face.

The way forward for the Swedish Marxists

During Saturday and Sunday, we received several reports and important lessons from the past years’ work of building the forces of Marxism in Sweden. We notice a growing interest among the youth and high school students in the Marxist Students and the Young Marxists. We have also noticed an increased interest in Marxist ideas amongst workers. This has been observed in the growing sales of newspapers and of Marxist literature from our publishing house Stormklockan. 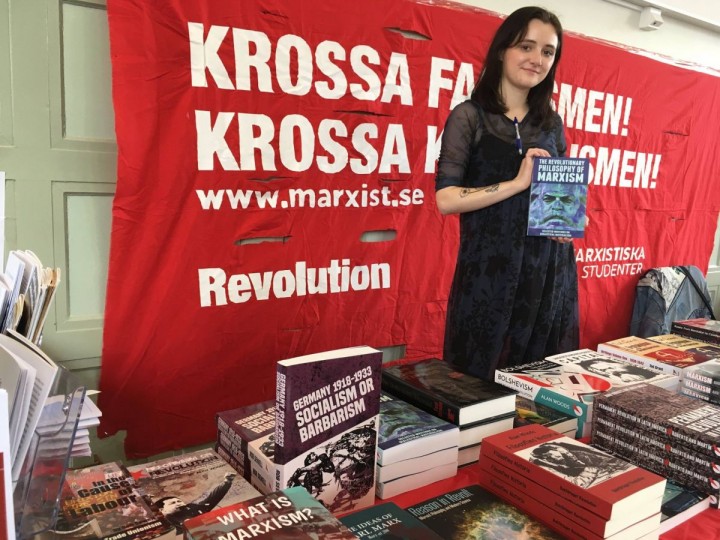 During the meeting, book sales raised a total of 14,461 SEK / Image: Lotta Angantyr/Revolution

On Saturday evening, a collection took place for the International Marxist Tendency, resulting in total of 95,511 SEK, clearly displaying the enthusiasm amongst the Swedish Marxists towards building the organisation, as well as their understanding of the importance of revolutionary self-financing.

Revolutionary theory is crucial when building our forces. During the meeting, book sales raised a total of 14,461 SEK, and our organisation is distinguished by an unparalleled attention to revolutionary theory and political training.

The discussions over the weekend covered a wide variety of topics. The environment, economy, culture, and art are only a few examples of the topics that were touched upon. Wherever you turn, it is obvious that capitalism cannot offer any solutions to the world’s problems. We are facing climate catastrophe, which cannot be prevented with anything other than a socialist revolution.

A collection for the IMT resulted in total of 95,511 SEK / Image: Anna Quiroga Hällstig/Revolution

A deep economic crisis and an intensification of the class struggle is imminent. Capitalism has reached the end of the road and it is our task to make sure that it does not bring down civilization and humanity with it. The determination and enthusiasm going into the patient work of building Marxist forces inspires hope in realising our rallying cry of “socialism in our lifetime!”