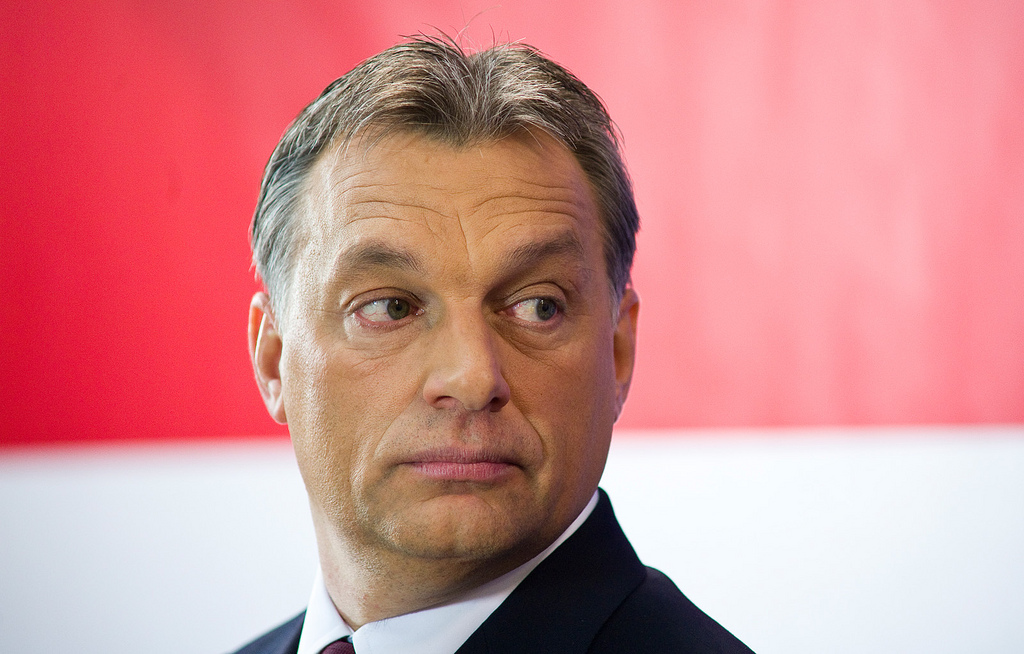 On Sunday 2 October, Hungary held a national referendum over the mandatory resettlement of refugees in the country. The Hungarian Prime Minister, Viktor Orbán, had hoped to use the vote to strengthen his authority both at home and abroad. Instead, he has suffered arguably his most embarrassing setback since he came to power in 2010.

The vote took place amidst heightened tensions between the Hungarian government and its neighbouring states over precisely this question. Orbán had clearly hoped that the vote would provide him with rebuttal for those, such as the Austrian government, who insist that refugees entering Hungary should have their asylum applications processed there -a legal requirement under the Dublin regulation - rather than being allowed to travel through Hungary on their way north and west.

Everything had been set up to deliver a majority for the government’s position. The question asked of the electorate was, “Do you want the European Union, even without the approval of the Hungarian parliament, to be able to prescribe the mandatory resettlement of non-Hungarian citizens in Hungary?” Then, in case that was not enough, the government poured an estimated 13.1bn forints ($47.8mil) into an enormous propaganda campaign for “No”, featuring posters of the Hungarian flag, emblazoned with, “Don’t put Hungary’s future at risk!”

By these means, Orbán had hoped to obtain a large enough majority not only to reinforce the standing of his Fidesz party in Hungary’s forthcoming elections, but also to strengthen his hand against his critics in Europe. However, the final result - a 98% majority for “No” - was somewhat undermined by the pathetically low turnout of 44%, which rendered the result constitutionally null and void under a provision introduced by Orbán’s own government.

This would be an embarrassing result for any government but it is not as humiliating as it first appears. Firstly, past referenda have also attracted similarly low turnouts - Hungary joined NATO in 1997 on a turnout of 49% and in 2003, joined the EU on a turnout of 46%. Secondly, the number of votes cast in favour of the government in such a transparently pointless plebiscite suggests that the government can still rely on a substantial body of support, despite this setback. Nevertheless, such a low turnout following such an aggressive campaign is clearly a sign that Orbán’s clownish strongman act is beginning to wear thin. As one voter put it, “The question was stupid.”

Seemingly unfazed by the result, Orbán declared that the decision of 3.28 million Hungarians to vote “No” obliged him “to give legal weight to the will of the people” and proposed to amend the Constitution to prohibit “the collective settlement of people in Hungary”. However, regardless of the spin put on the result by Orbán and his Fidesz-Christian Democrat coalition, the government has effectively spent a huge amount of taxpayers’ money on a referendum which, by their own rules, has no legal effect. 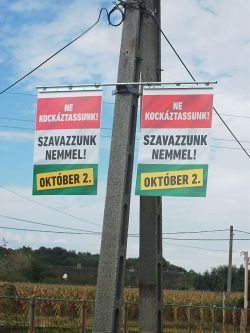 Posters of the government in Zichyújfalu. Subtitle: „Do not take chances!” (red background color) and („Vote 'no'!”) (white background color) - Photo: The Little Glass SlipperIn fact, even if the result had been constitutionally valid, the likelihood that the referendum would have had any effect beyond further inflating Orbán’s already considerable ego, is doubtful. The EU had already abandoned the plan to impose resettlement quotas across the continent in the face of enraged opposition from a number of central and eastern European member states. But more importantly, as revealed in a letter published by the President of the European Council (EC), Donald Tusk, Orbán had in fact voted in favour of refugee resettlement quotas in a meeting of the EC in February.

So the Hungarian government is now loudly making plans to push through the decision of an invalid referendum, rejecting a non-existent threat which the Prime Minister voted for anyway. Welcome to European politics in the 21st century.

This is not the first time Orbán has played this kind of double game. In fact, the pursual of essentially contradictory policies has defined his politics since he returned to power at the head of his current coalition in 2010.

His economic policy for example, dubbed “Orbanomics”, has delivered relatively steady growth on the basis of EU-funded investment (according to a report commissioned by the European Commission, European Union support contributed to the creation of more than 108,900 jobs in Hungary between 2007-2013) combined with state intervention which favours Hungarian (and pro-government) enterprises over their competitors. In other words, Orbán is pursuing a policy which both depends on and completely contradicts the purpose of the EU.

Further, in the field of diplomacy, Orbán leans both towards EU and Putin’s Russia, reflecting his country’s position at the crossroads between the two powers. Last year, Orbán referred to Russia as “our partner” and cast doubt on the need for the EU trade sanctions imposed on Russia in 2014. He has also expressed admiration for Putin’s “illiberal democracy” whilst posing as the head of a movement to save the EU from the “Brussels elite”.

Most crucially, even on the question of migrants he simultaneously occupies two contradictory positions. Orbán urged the UK to remain in the EU during its referendum campaign and staunchly defended the right of EU citizens, such as Hungarians, to move freely across Europe. At the same time however, he has consistently and aggressively opposed the free movement of people across Europe when it comes to refugees from Syria and elsewhere entering his country. Last year the Hungarian state even went so far as to erect a border fence on its border with Slovenia, calling into question the future of the Schengen zone and with it, a borderless Europe.

What this seemingly bizarre collection of policies demonstrate is that as a result of the crisis, Orbán’s government (along with many others) is effectively forced to look both ways. This is particularly apparent on the question of migrants. Hungarian emigration almost doubled in 2014, with under 40s making up 77% of this exodus. One reason cited for the rising rate of emigration is the quality of education and availability of work. But whilst Hungary must export its unemployment to other parts of Europe, the government relies on the threat of a “Muslim invasion” to beef up its own popularity and distract from its own considerable failings. It is this consideration which trumps all others and forms the real basis for the “cultural counter-revolution” which Orbán claims to lead.

This phenomenon is by no means limited to Hungary. Poland’s government is behaving in a similarly “illiberal” fashion whilst Slovakia’s Robert Fico has threatened that his country would leave the EU if it were forced to accept refugee resettlement quotas. Beyond central Europe, in the civilised and liberal West, Theresa May’s rhetoric of a “hard Brexit” with proposals to keep a register of foreign workers is also part of this trend. Not to mention the American elephant in the room…

To the East, Erdogan’s Turkish regime is another example of an increasingly authoritarian state leaning towards both Russia and the West whilst using whatever scapegoat is available (in this case the Kurds) to prop up its support. In all of the above cases, all the ridiculous braggadocio and reactionary rhetoric is if anything more a sign of weakness than of strength.

What the referendum result shows is that a huge number of Hungarian citizens are disconnected from and disinterested with politics. Further, a recent OECD study, reported in the Budapest Business Journal, found, “In the age group of 15-29, almost 50% of Hungarians were reported to be uninterested in politics, while this figure was 36% for the total population.”

Judging by the low turnouts of previous referenda, this is a phenomenon that seems to have been a common thread in Hungarian society for at least the last 20 years. That Hungarians who are young enough to have only known capitalist democracy are so disinterested speaks to the lack of popular engagement and control over the country’s course over the last period. Nor is it surprising when the choice has between the rabid nationalism of the Right and the sweet nothings of the centre-left. But as the crisis continues and begins to make itself felt more in Hungary, within the disaffection of the youth there is the potential for an immense threat to Orban and his reactionary government.

As has been seen elsewhere, the apathy and disaffection can quickly be transformed into a powerful anti-establishment and even insurrectionary mood. This process is also taking place in Hungary. As the Irish revolutionary, James Larkin once said, “The great appear great because we are on our knees: Let us rise.” Orbán, for all his posturing and plebiscites, will not be able to resist a revolt of the youth, but without a genuine alternative being expressed from the left, the amazing potential of this mood will be squandered.

Armed with a real, revolutionary alternative to the dead-end of capitalism, the masses of Hungary, Europe and the world can shake off all of the Orbáns of this world like dust off an old coat. That alternative can be found in Hungary’s own revolutionary history. What is needed is a party which fights on the principles of the revolutions of 1919 and 1956:

For an end to all national oppression, racism and bigotry!

For the social ownership of the factories, mines and banks!