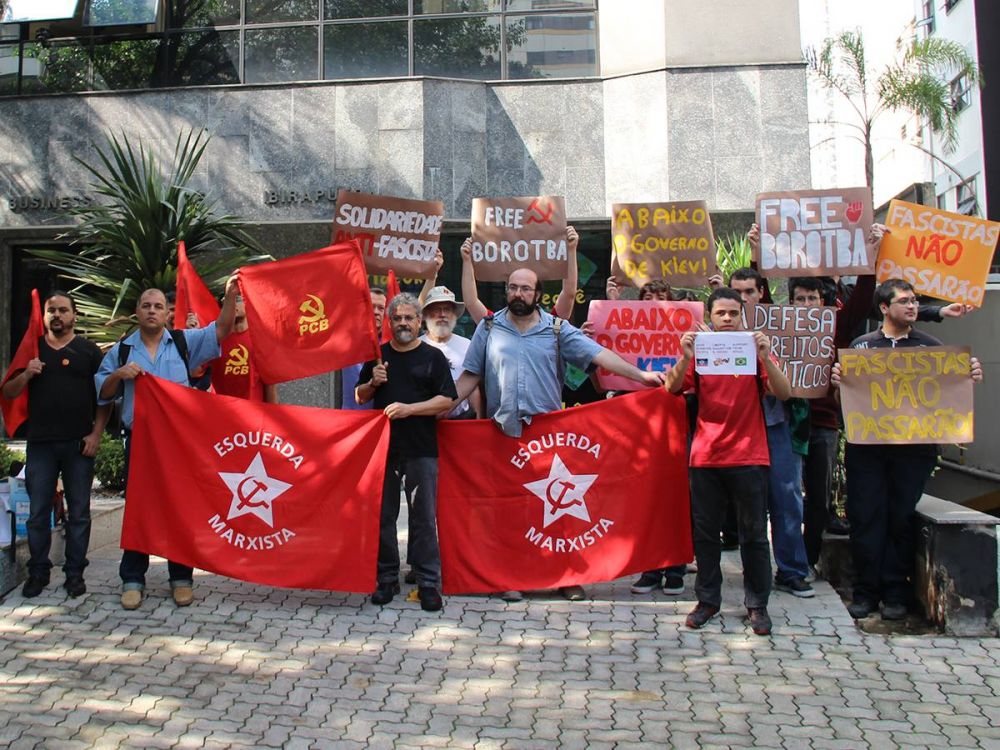 In response to the call made by the International Marxist Tendency in solidarity with the Ukrainian workers and their organizations, Esquerda Marxista and the PCB (Brazilian Communist Party) held a rally in front of the General Consulate of Ukraine in São Paulo.

Around 10 am, the first demonstrators began arriving on site. The Consulate is located in a commercial complex, on top of an office building in Moema, a wealthy neighborhood of the city. Two comrades went to the front desk of the building saying they wanted to go to the Consulate. The receptionist promptly said the Consul had left, was not there, and they would only be received with prior appointment.

Protesters kept coming to the site, and when there were already a few dozen, the General Consul Oleksandr Volodymyrovych Markov, who was not supposed to be there, appeared at the door and from a distance, he shouted: “What do you want here?”

Two comrades approached and explained that they would like to deliver a letter and record the act of delivery, by taking a photo. The Consul, with a suspicious attitude, answered: “But are you Ukrainians?”, “A Letter about what?”. The comrades replied. “We are all Brazilian and we are concerned about what is happening in Ukraine” And then the Consul retorted: “But you do not support us against the Russian Empire?”. And the comrades replied: “We do not support nor the Russian government nor the European Union! We defend democratic and self-determination rights of the Ukrainian people “. 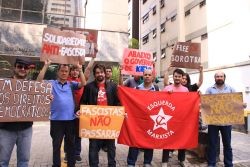 Then the Consul agreed to receive the letter (below), but refused to be photographed receiving the document. Then, he called the two comrades who delivered the letter to enter the building. Caio Dezorzi (EM) and Edmilson Costa (PCB) entered with him. At the reception of the building, the Consul passed eyes on the first page of the letter and his tone of mistrust changed to hostility. He asked Caio which organization he represented. When he heard “Marxist Left”he promptly retorted: “I’m anti-Marxist”. At least, he allowed us to continue the conversation, and said that he would deliver the letter to the Ukrainian government and withdrew into the building. He seemed quite nervous and scared.

At the door, the protesters wielded placards, flags and chanted antifascist slogans.

A car with soldiers, sergeants and two officers, lieutenants of the Military Police followed throughout the development of the rally. Comrades of Esquerda Marxista asked them if it was the Consul who alerted them, they said no, but the rally had been posted on the Internet and they were ordered to investigate.

At the end of the rally, Esquerda Marxista and PCB agreed to hold a joint public activity on June 25 at 7pm in the auditorium of the Marxist Bookstore, on the Ukrainian and international conjuncture.

In order to reach the hands of M. Petro Poroshenko, President of Ukraine

In solidarity with the anti-fascist struggle in Ukraine

Today, we are here, at this Consulate in the city of São Paulo, to transmit our message of solidarity, to workers and the Ukrainian people who are being victimized by inhumane and violent attacks brandished by military troops and paramilitary fascists working together and under the protection of those who are installed in power.

Since May, a tragic situation is developing in Ukraine. Fascist paramilitary groups integrated into the State or directly financed by oligarchs, are performing acts of “white terror” against anyone who opposes the government of Kiev.

On May 20, paramilitary fascist gangs tried to kidnap Borotba leaders, a traditional leftist organization in Ukraine after a mass demonstration against the government. This action, taken in the public square and in daylight, only failed its goal because the fascists were prevented by the participants of the demonstration. Many of the leaders and activists of Borotba, facing constant threats and life-threatening, were forced to go into hiding to defend and pursue their struggles.

Days earlier, on May 16, the Communist Party headquarters in Kiev were invaded, books, flags and materials were burned. At the same time, procedures were also initiated to ban the Communist Party, which won 2.7 million votes in the last election. War operations, qualified shamelessly against terrorism, continue to be done against the provinces of Lugansk and Donetsk, that the sovereign will of the people decided to separate from Ukraine.

The Esquerda Marxista, Brazilian section of the International Marxist Tendency, addresses to Mr Oleksandr Volodymyrovych Markov, in order to voice our protests against fascist attacks against those who fight for their freedom and for the most elementary democratic rights, such as speech and organization.

We add in the thousands of activists around the world struggle in solidarity with Ukrainian fascists and against the government. We demand the end of military operations against its people.

We add to those, all around the world, struggle to put an end to the government of Kiev.

End of the persecutions and attacks on Borotba and the Communist Party of Ukraine as well as all attacks on democratic rights in Ukraine! International solidarity among workers, defeat fascism in Ukraine and around the world! “