Share
Tweet
The Banks are going down like ninepins. The whole financial system has been based on an unstable house of cards of credit. The pyramid had been built up over years of mad speculation. Now it is all unravelling.

Letter to Daily Telegraph (17.09.08) “Without being a Marxist, one can see why Marx's prophecies of how capitalism would implode were correct". 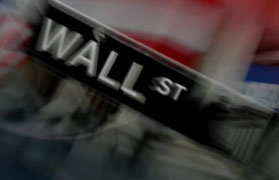 The Banks are going down like ninepins. It's just over a year ago that Northern Rock went bust. That was the first time we heard of the 'credit crunch' - the fact that banks were nervous of lending to each other. Why? Because they realised the whole financial system was stood on an unstable house of cards of credit. The pyramid had been built up over years of mad speculation. They had got to the stage where they did not know which bits of coloured paper in their vaults were sound and which were non-performing toxins.

Does this sound familiar? "One investor buys General Motors at $100 (he means a GM share), sells it to another $150, who sells it to a third at $200.Everyone makes money." This is a bubble. This was an analysis of the Wall Street boom offered shortly before the crash in October 1929. That is what has been happening over the past few years too - with house prices rather than shares

Sales were made in the 1920s 'on the margin'. In lay terms this means that you buy shares on the never-never. You bet with other people's money. What's the problem, as long as you can sell the shares at a higher price to a person known in the 1920s as 'the greater fool'? These days they call it 'leverage'. It's exactly the same. Fannie and Freddie, the huge mortgage insurers, had lent 50 times as much as their assets. That's leverage!

The problem, of course, is when the 'greater fool' wises up. After all the speculators are not really stupid. Their system is stupid. Then the bubble bursts, the house of cards collapses. It happened in 1929, it's happening now.

How bad can it get? When the US government took over the giant firms Fannie and Freddie, they nationalised $5.3trn in mortgage obligations. That's not all. Speculators had built up claims of $62trn in credit default swaps (a kind of derivative, a sort of bet) on the two firms. By way of comparison the whole world's output in 2007, the fruit of 6½bn people's labour, is estimated at $53trn!

The authorities thought that the bail-out would stop the rot. It didn't. The next week Lehman Brothers (founded 1850) was allowed to wither on the vine and Merrill Lynch was taken over by Bank of America in a shotgun wedding organised by Treasury Secretary Henry Paulson. This was just months after Bear Stearns disappeared beneath the waves. In a few months three out of five US investment banks have gone to the wall and the other two, Goldman Sachs and Morgan Stanley,  have had to clean up their act.

At the same time insurance giant AIG indicated it was drowning, not waving. Paulson (dubbed Lenin by some commentators) once again acted to take an 80% government stake for $85bn - he nationalised it. Nothing's can cost too much to bail out the rich from their own stupidity.

Over the pond the same week Gordon Brown supervised the effective takeover of our biggest bank HBOS by Lloyds TSB. Things are going from bad to worse in London, New York and all over the world. Share prices of the banks are in meltdown. Other shares are following suit. This means billions of paper wealth wiped out. Central banks are pumping in billions as ‘liquidity’ - to no avail. The decision to set up a ‘bad bank’ to buy up all the ($700bn) toxic mortgages has bought another respite - but for how long? It’s not a solution, just a mopping up operation.

Banks are nervous. Some executives claim they are being stalked by predators. Is there a herd instinct at work in the present panic? Definitely. If a speculator sees somebody making money they'll try to pile in. If they see people losing their shirt, they'll run a mile too. They've nothing better to go on. That is why Keynes spoke of the ‘animal spirits’ of the entrepreneurs. But blaming ‘spivs and speculators’ when it all goes wrong is just blaming normal capitalist behaviour. As Charles Kindelberger comments in 'Manias, panics and crashes' an explanation of the 1929 stock market collapse, "Requires an old-fashioned theory of the instability of the financial system."

The crisis will not confine itself to the temples of high finance. 100,000 banking jobs are to go in Britain, and the knock-on effects will penetrate deep into the real economy in the form of unemployment, as it did after 1929.

The financial system is unstable because capitalism is unstable. The system is unplanned, and only thing linking people's economic activity is the exchange of money. No wonder credit  is so powerful and mystifying when it all goes pear-shaped. Panic, convulsion and the lurch from hysterical speculative boom to the depths of despair are not accidental. They are rooted in the system. 1929 could be re-run at any time. It could be re-running now.