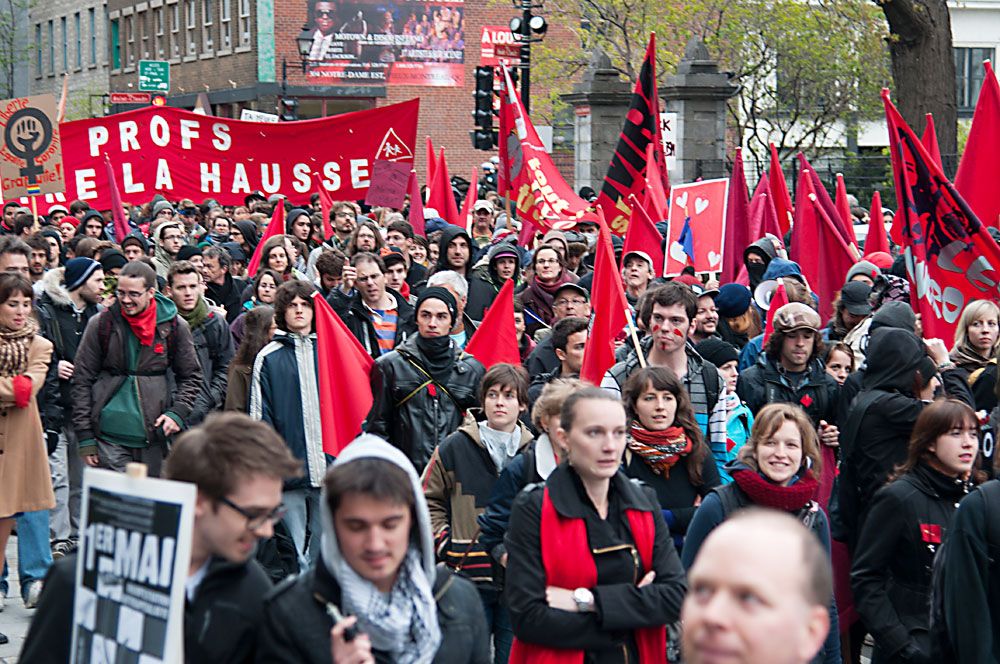 Today we publish reports from May Day celebrations in Quebec, Indonesia, Austria and France. The reports relate how there is a growing anti-Capitalist mood across the world as the Capitalist class is making the workers pay for the crisis.

We have experienced an exceptional May Day here in Quebec. This historic day with strong traditions in the Quebec labour movement coalesced with the mass student movement that has been going on for 12 weeks now. The day was filled with many events and demonstrations that have kept us all on our feet.

Starting early in the day at 5am there were pickets at 3 different CEGEPS (colleges) against injunctions passed banning picket lines trying to re-start classes. All of these injunctions failed once again.

At lunch time, thousands of workers organized in the CSN (2nd largest trade union federation in the province) held symbolic picket lines in support of the student strike. The comrades of the International Marxist Tendency joined the pickets and discussed with workers who were wearing red squares (the symbol of the student movement) and holding CSN flags. The mood with the workers was good and they told us that both student and worker struggles were essentially the same and that the unions should do more to support the students on strike. They all reacted with enthusiasm towards our position that the next step for the student movement in Quebec is a 24 hour social strike against the Charest government.

There was another rally in front of Premier Jean Charest's office where a few hundred students and workers were chanting slogans and discussing politics. The rally eventually dissolved, and at 4:30pm a traditional "anti-capitalist" May Day march was scheduled. The march drew a sizable crowd of several thousand. At 6pm a march organized by the main trade union federations began. It drew a much smaller crowd than normal which comprised mostly students.

However, the day was far from over, a night demonstration was organized for 8:30 by students. These night demonstrations have been going on now for 6 nights in a row with always a turnout of a few thousand people with the exception of Wednesday and Friday where tens of thousands of students took the streets in reaction to the government propositions. We marched with 5000 students in the streets of downtown Montreal until 11pm.

A long day of protest in Montreal!

May Day in Indonesia, the largest in Asia Pacific

160,000 workers marched down the streets across Indonesia, makingthis by far the largest May Day rally since the 1965 defeat of Indonesian working class. After theworkers defeated the attempt ofthe SBY government to increase fuel price back in March, they againflexed their muscle on May Day. The Indonesian ruling class was forcedto make awkward statements and gestures that they respect Workers’ Day. Many bourgeois politicians and capitalists even suggestedthat May 1st should be made holiday in Indonesia. However, behind thesmile and fanfare, the government had prepared tens of thousands ofsecurity forces to beat back the rally.

In this historic day for workers around the world, the comrades ofMilitan Indonesia in Jakarta, Semarang, and Surabaya, joined theworkers in their May Day celebration. We brought with us ourrevolutionary ideas, contained in our first May Day issue of Militannewspaper. Our newspaper was well received by the workers, whoappreciate our clear and insightful articles aimed at bringing workerscloser to socialist understanding of their historical tasks. InJakarta and Surabaya, within a short space of time, a small number of comradessold most of the papers they had with them to the workers. This MayDay marks our humble beginning of establishing a proletarian newspaperin Indonesia.

Mayday in Austria: Break the dictatorship of the markets – cancel the public debt

May day rally in ViennaMayday celebrations in Austria start with the traditional anti-fascist torch marches of the youth organisations on the evening of the 30th of April. The main march in Vienna this year was held under the slogan “Raise your voice – for more democracy”, which is a clear step back in comparison to previous years, when the marches had a clear anti-capitalist orientation. This is an expression of the party apparatus pressure to steam-line the party in support for the austerity policy and the next general elections.

There is huge bureaucratic pressure to unite the party in support for the European Fiscal Mechanism and the national budget-cut of €24 Billion. It is the main reasons for a general feeling of unease in the labour organisations. We were present at the march with our banner “Raise your fist – fight for Socialism”.

The Mayday rallies and celebrations of the Austrian Social democracy have a long tradition.

Vienna City HallThey always reflect the general mood in the organised labour movement. In that sense the leadership of the SPÖ really has to be alarmed. In Vienna the turnout of the traditional march to the city hall of 100,000 participants (even if this party-estimation is exaggerated for the last years) was much lower than in the past. Especially the blocs of the district organisations were very weak with mainly officials and older comrades. Only the trade union wing of the party (the FSG) had a significant support. The mood of the SP rank and file was shown also in the fact that most people left before the main speeches of chancellor F

aymann and representatives of “Red Vienna” and instead went to the “mercato rosso” to have a drink. So the square in front of the city hall was half empty when rally ended. The official speakers could not enthuse the rank and file. Their speeches against “neoliberalism” and the corruption under the former right wing government, which is being revealed in the official press in all its details, lacks authenticity.

FSG trade union wing blocIn fact, the SP leaders only try to paint a rosy picture of the policy of the government. What helps them is the relatively good economic performance of Austrian capitalism. Compared to Greece or Spain, people are happy that the youth unemployment and the need to introduce cuts are not as high as in these countries. In discussions with many participants of the march, however, it became clear how disillusioned the rank and file is. Many turning to cynicism, but a lot of comrades are very open to support the work of the Marxist tendency at least with a donation or buying the paper.

Our slogan “Break the dictatorship of the markets – cancel the public debt” was very well received by many people and gave us the opportunity to discuss a Marxist perspective for the crisis of capitalism. There is definitely a certain layer, mainly youth and shop stewards, looking for a political alternative to reformism.

Der Funke stallIn the second biggest city of the country, Graz, capital of the region Styria, the cuts of the regional budget amount to 25 % of the total budget, with severe consequences for the social and health sector. The region is governed by a coalition between the social democrats and the conservatives (a so called “reform-partnership”). The cuts lead to such a crisis in the party that the Social Democratic Party for the first time since 1890 (with the exception of the periods of the fascist regimes) cancelled the rally and invited its supporters to a “future-breakfast” where the main slogan was “change”. It was the local communist party and its supporters that hit the street in Graz for them.

Stall of SJ Vorarlberg in BregenzBut also in other towns and industrial villages May day is celebrated with rallies and parties. The supporters of “Der Funke” were present in 12 towns and villages, more than ever before. Apart from Vienna we were also present in Linz, Graz, Salzburg, Innsbruck, Bregenz, Lenzing, Kapfenberg, Bruck/Mur, Mödling, Golling and Krummnußbaum. In total we sold some 500 copies of the new issue of our paper. Moreover we collected around €3,900 selling our “building blocks” to get our Marxist school (Pfingstseminar) at the end of May financed. These results are very good considering the relatively low turnout of the rallies. In Vienna, Linz and Bruck/Mur the comrades organised barbecues in the afternoon to celebrate Mayday with a good attendance and mood, which further contributed to the financing of our work.

Karl Marx in BregenzAfter Mayday we will be faced now with a series of workers’ struggles to defend their purchasing power and the collective contracts. The chemical workers are organising a demonstration for 3rd of May, the trade union in the tourist sector is planning a demonstration for 8th of May and there is the conflict in the metal industry where the capitalists want to destroy the most important collective bargaining agreement, which is a model for all other industries. This could become a serious struggle with implications for the whole of the Austrian labour movement and we will intervene in this conflict with necessary audacity. 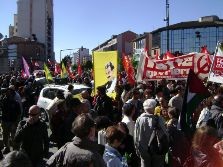 Toulouse May Day rallyAn estimated 15-20,000 people were in the streets of Toulouse for the May 1st celebrations. The rally started at Place St. Cyprien and turned into a march that went across the Garonne River to assemble at PlaceJean D’Arc. All of the major 5 unions in France were represented at the rally, particularly the CGT. They were also joined by the anarcho-syndicalist CNT. All of the left parties from the previous week’s election were present with flags being waived from Partie Socialiste, Lutte Ouvrier, Nouveau Partie Anticapitaliste and from Front Gauche which had the supporters of Partie Communiste and Partie Gauche. Toulouse supporters of La Riposte intervened effectively during the events with two tables at the start of the rally and one when it came to Jean D’Arc. The comrades sold many buttons, booklets and 10 papers for a total of more than €360 and had several good conversations about our ideas. 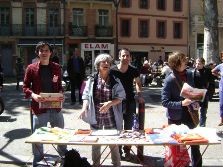 La Riposte stallThe irreconcilable contradictions of capitalism are starting to become clear to more and more people, particularly young people who are sometimes required to do unpaid or very low-paying internships by their universities in order to graduate. The workers have also faced periodic layoffs in the last few years and their famous discontent is showing signs of coming back. We need to build a strong core of Marxists here to reach the numerous students and workers that live here with our ideas and analysis.