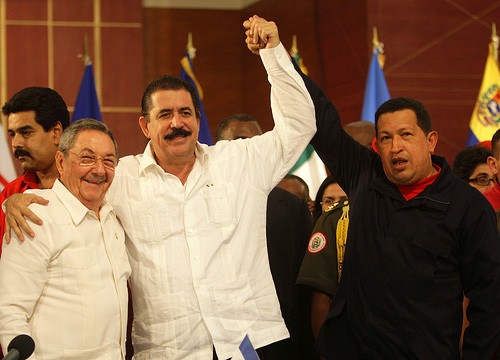 Yesterday morning it was confirmed that Mel Zelaya was in the capital Tegucigalpa. He made an appeal to the people to come out to protect him. The masses responded by the tens of thousands. The next few hours will be decisive. The balance of forces is on the side of the masses. They can deal the last blow to the coup regime and start the building of a new political regime based on the organisation of the masses.

On Monday morning, September 21, at 11am it was confirmed that Mel Zelaya, the legitimate president of Honduras, was in the capital Tegucigalpa, hosted by the Brazilian embassy. President Zelaya made an appeal to the people to come out to protect him, and they responded by the tens of thousands. He had been overthrown by a military coup carried out by the oligarchy on June 28 and for 86 days the workers, peasants and youth, the people of Honduras, had maintained an heroic struggle against the coup facing repression, selective assassinations, mass arrests and a media blockade. It was only the resistance of the masses, led by the National Front of Resistance Against the Coup, which made possible Zelaya's return to the country on September 21. It was neither the diplomatic manoeuvres, nor the pressure of the different international bodies (which was at best very mild) on the regime.

Zelaya's return took the regime completely by surprise. First they denied reports that the president was back in the country. But pictures of him at the Brazilian embassy had already been published by the world's media. Thousands were already gathering outside the Brazilian embassy and Zelaya had addressed the crowd with the battle cry of "Motherland, Restitution or Death!" For more than five hours there was no official response from the Micheletti regime. At 5pm local time Micheletti came out in a press conference, surrounded by representatives from the capitalist class and demanded that Brazil hand over Zelaya to face trial. He had already announced that a curfew would be imposed from 4pm until 6am the following morning (which he then extended to 6pm Tuesday). This provoked panic as workers in the public and private sector left their jobs and rushed home.

The regime is clearly attempting to use repression to stop the movement. The Armed Forces in a separate statement announced that they would defend "constitutional order" (that is, the illegitimate coup), "even if it means the loss of life". Mobile phone networks were cut off, opposition radio stations had power cut off and had to be taken off the air, and the army took over the country's four airports and closed them down.

But the enthusiasm created by Zelaya's return after 86 days of mass resistance cannot be stopped by repression. We are likely to be witnessing the last days of the coup. By the end of the evening a massive crowd estimated at 50,000 people, defying the curfew, were already gathering around the Brazilian embassy and Zelaya was meeting with the leaders of the resistance. The mood was jubilant and the streets were full of laughter, joy and celebration. In the working class neighbourhood of Kennedy, three thousand people also defied the curfew, marching until midnight. Similar scenes were repeated all over the country.

However, a word of warning must be said. The struggle is not yet over. The coup plotters are still in power and control the state apparatus (including the Army and the Police). If the coup is overthrown by a popular insurrection they have a lot to lose and therefore they could resort to desperate measures to stay in power.

On the other hand, sections of the oligarchy and above all US imperialism will be keen to try to reach a negotiated settlement, to save whatever they can. Washington has already insisted that the way forward is the San José "Accord", which as we have already explained, would tie Zelaya hand and foot and give the oligarchy what they wanted to achieve through the coup. This must be rejected! There should be no amnesty for the coup plotters. The will of the people must be expressed democratically in free and democratic elections to a Revolutionary Constituent Assembly, not the rigged elections the coup plotters are preparing for November 29.

Already at the OAS emergency meeting called to discuss the events, a resolution was passed reaffirming the San José Accord. However both Nicaragua and Venezuela voted against and registered their protest. The Nicaraguan ambassador said that he had talked to Zelaya and that Zelaya was also rejecting the San José agreement, which he had previously accepted. This is correct and should be applauded. Other Latin American governments should be put under pressure to follow the same line (starting with Bolivia, El Salvador and Ecuador).

In the next few hours we can expect to see frantic negotiations to save capitalist legality and the heads of the most prominent coup plotters and their supporters in the capitalist class, combined by attempts to put the movement down with repression.

The masses have to deal the last blow to the regime. The National Front has made an appeal for a national march on the capital which could be even larger than the historic march in early July when Zelaya attempted to return by plane. This should be accompanied by a general strike with workplace occupations. The workers must become the masters of the situation. If the regime cuts off power from radio stations, the workers must reconnect them. If the regime cuts off mobile phone coverage, the telecommunication workers must restore it. The teachers unions have already called for an all out strike starting on Tuesday morning. The neighbourhood, local and regional committees of the Front should take control of the situation and coordinate their actions through democratically elected representatives, so that an alternative power can be set up to that of the illegitimate coup regime.

There should also be a clear appeal to the ranks of the Army and the police not to follow orders. Zelaya has already called them to turn their weapons against their officers. This must be backed up by the mass pressure on the streets and outside the military barracks. At the same time the movement must defend itself against provocations and repression. Barricades have already been erected outside the Brazilian embassy. Armed defence squads should be organised as well.

The next few hours will be decisive. The balance of forces is on the side of the masses. They can deal the last blow to the coup regime and start the building of a new political regime based on the organisation of the masses. A revolutionary constituent assembly called under the authority of the National Front of Resistance is the way forward that can satisfy the aspirations of the masses.