Details
In Defence of Marxism
04 September 2014 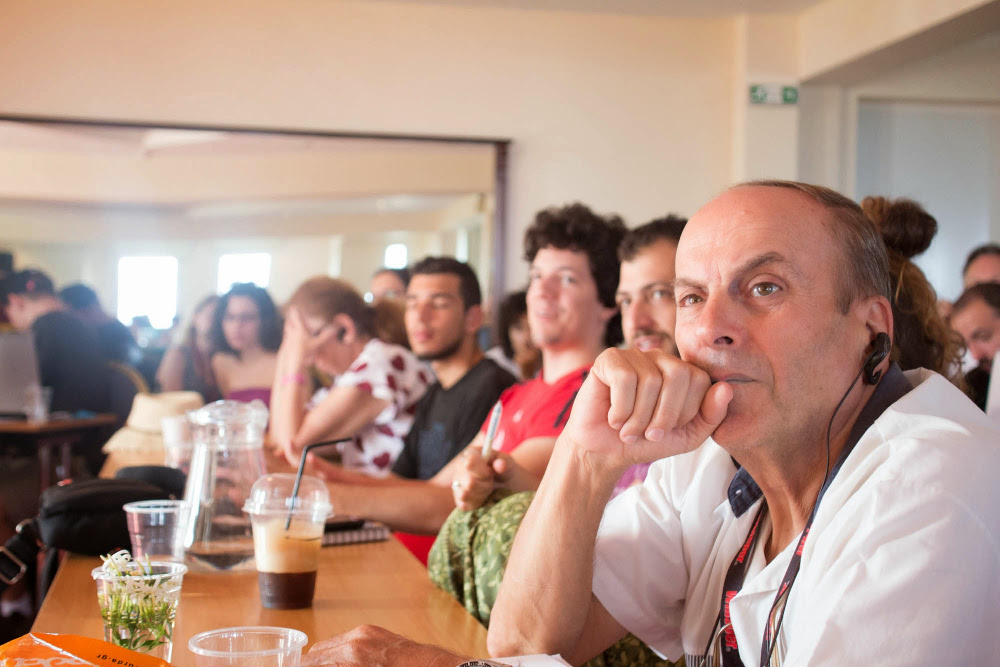 Revolutionary moods are growing across the world as capitalism rots and the ruling elite attempts to maintain its position by attacking the working class. Meanwhile, the International Marxist Tendency is growing in numbers, developing a deeper understanding of the processes taking place, intervening in the struggles taking place, and fighting for socialist ideas in the movements of workers and youth.

Over 250 comrades from around the globe met in Greece between 29th July and 3rd August IMT's 2014 World Congress to discuss the perspectives for the world revolution and the tasks of the Marxists in these turbulent times. Common themes emerged from the discussions and the contributions made by comrades throughout the week, which emphasised the need to analyse and understand economics and politics on a world scale in order to understand how the situation is unfolding and to determine how to intervene most effectively in the mass movements and working class struggles taking place.

An epoch of instability and turbulence

Above all, the current period can be characterised as one of extreme instability: economically; politically; and socially. The turbulence of the geo-political situation – with small wars, proxy wars, civil wars and terrorist attacks across the world – is at levels not seen since the Second World War. The result of this instability and turbulence is that sharp turns and sudden changes are implicit in the situation. It is for this reason that it is all the more vital – now more than ever before – that those fighting for a revolutionary change take time to discuss the events taking place and the processes that are unfolding globally, in order to properly understand in what direction these events and processes are leading. 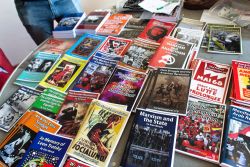 Groups of delegates arrived from across the world for the bi-annual Congress. These included delegates from Canada, the USA, Mexico, El Salvador, Brazil, Argentina, Pakistan, New Zealand, Britain, Denmark, Sweden, Germany, Austria, France, Switzerland, Belgium, Serbia, Greece, Italy and Spain, and elsewhere. Attending the congress were two comrades from Russia and a Ukrainian member of Borotba, the revolutionary organisation that is playing a leading role in the struggle against fascism in the Ukraine.

Throughout the week, delegations held formal and informal meetings to learn from each others' experience of organising and campaigning in both the trade unions and the student movement. Additionally, a special meeting was held with the Dmitry Kolesnik, editor of the Ukrainian left-wing website liva.com.eu and member of Borotba, to discuss the Solidarity with the Anti-Fascist Resistance in Ukraine campaign. This was well attended by a group of about 50 people who attentively listened and raised questions.

The largest part of the Congress was dedicated to discussing the perspectives for the world revolution, based on World Perspectives 2014 document. The document embodies the concentrated experience of thousands of comrades of the IMT and is the most important analysis of the IMT, produced every two years. 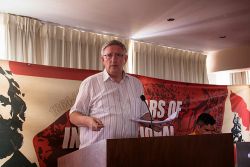 Alan Woods, In Defence of MarxismComrade Alan Woods opened the Congress by giving an overview of the most recent developments in the Middle East, Greece, Spain, and Ukraine. This was followed by an insightful analysis of the consequences of the economic crisis of 2008, which – even according to bourgeois commentators – are predicted to last for a minimum of two decades.

Alan stated that, as Marxists, we do not study economics for the sake of academic interest but to better understand the effects of the crisis on class consciousness. Mass movements today reflect the increasingly radicalised consciousness of the masses. In various countries, such as Greece and Spain, workers and youth are reacting to what have already been several years of austerity measures, which have provided no benefits for the vast majority of people.

The international nature of these movements and uprisings is also having a huge effect on people’s consciousness around the world. However the lack of any leadership to these movements, with nobody presenting a genuine alternative to austerity, is an obstacle that needs to be overcome.

Alan explained that that – in the absence of a revolutionary leadership - these movement of the masses will not be linear, nor follow a steady pace, but will go through periods of ebb and flow, of revolution and counter-revolution. Throughout, the masses will learn through experience and struggle. 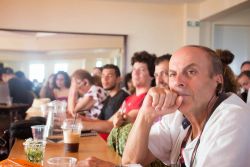 Greek comrades listening to the discussionToday it is clear that the wave of strikes in southern Europe, following the implementation of harsh cuts to social welfare and public services, has only led to exhaustion and a draining of the energy of the working masses. The next wave of strikes and protests, which will inevitably happen, needs to have a clear political goal: the overthrow of the current political establishment, with a socialist programme that calls for all power to be given to the working class.

It is clear that all over the world, class struggle is intensifying as capitalism crushes the lives of ordinary people in order to be able to sustain the privileges of a tiny elite, showing ever more the true barbaric face of the capitalist system. Meanwhile the people of Europe are waking up to the rotten reality of bourgeois democracy, whereby, with scandal after scandal, it has become clear that all forms of moral and ethical standards have disappeared from the ruling class. 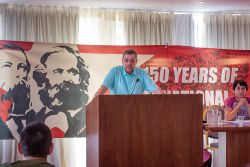 Fred Weston, editor In Defence of MarxismThe revolution will be expressed as a crisis of the regime, of the bourgeois state, and of its apparatus. The sense of security that the people of Europe had become used to is coming to an end as the economic crisis hits the poorest layers of society and effects even the middle-classes, sharply polarising society and making the contradictions of capitalism even more evident. This sharp polarisation will also be reflected by sharp turns in politics, with swings both far to the Left and far to the Right, as the masses test one party after the other and try to find a solution to their problems, within a system that cannot offer them any real alternative.

In the rest of the world, the issues are ever more similar to those in Europe. In Brazil corruption within the state has reached gigantic proportions, which was highlighted by the World Cup. People are being spied on, evicted from their homes and killed in the streets by a state that has lost its last drop of humanity. Comrades from Brazil remarked how in Brazil the struggle against repression has become part of the struggle for democratic freedom and for socialist policies. 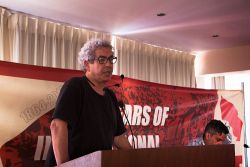 Serge Goulart from BrazilA struggle for democratic rights is also exploding in Ukraine, where trade unionists and left-wing parties have been attacked and repressed by fascist paramilitaries that have been incorporated into the state by the Kiev government. To this issue, the Congress dedicated a separate document, voted unanimously, entitled ‘Theses on Ukraine’. Also a resolution in solidarity with the anti-fascist struggles in Ukraine was passed, again unanimously, putting in practice the Marxist principle of internationalism.

Alan Woods in one of his contributions also pointed out the game of power being played in Ukraine by the US, Europe and Russia as a crucial example of how cynically the bourgeois class tries to satisfy its own interest. The only solution to the crisis in Ukraine is for the unification of the working classes in Ukraine - for a united struggle of workers to overthrow the oligarchs and replace them with a planned economy and workers' control. 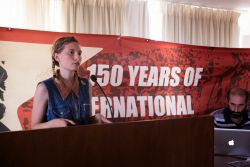 Ylva Vinberg from SwedenWorld Congress also provided a chance for comrades to experience the scope of the International Marxist Tendency in less formal terms. The week was accompanied by a good deal of socialising, allowing comrades, including many newer and younger comrades, from different sections to meet one another and share experiences. Due to the successes of many sections in attracting layers of radicalised youth, as was commented on in a number of contributions throughout the week, the character and composition of the International had changed significantly since the previous World Congress of 2012, with many new faces – attracted by the revolutionary ideas of Marxism - present at the Congress for the first time. 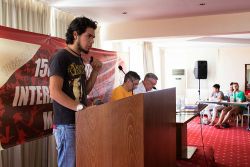 Comrade Yohan from El SalvadorThe high degree of enthusiasm brought by the new layers of youth was demonstrated in the constant singing of revolutionary songs from the labour movements of various countries, which often broke out spontaneously when comrades gathered together. This sharing of revolutionary sentiment buoyed all comrades along, allowing them to grasp the flavour of revolutionary proletarian internationalism, represented in the ideas of genuine Marxism..

This feeling of enthusiasm was best represented by the social that accompanied the final night of the congress. Aside from the fact that the members of all delegations present at the Congress mingled, giving a flavour of the International Marxist Tendency as whole, different sections performed songs chosen from their respective labour movements. This produced an atmosphere of genuine camaraderie, with a little rivalry also present to see who could sing best!

Workers of the world: unite! 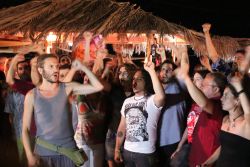 Italian comrades singingA celebration of socialist internationalism was very apt for this year's Congress, as 2014 marks the 150 anniversary of the founding of the First International by Marx and Engels, which was acknowledged on banner for the Congress, held aloft behind the speakers.

Thus, this year’s World Congress provided a living demonstration of the strength of the ideas of genuine Marxism, which thoroughly confirmed the perspectives put before the Congress. The spirit found in the famous rallying cry of The Communist Manifesto of Marx and Engels, “Workers of the world, unite!” found a living embodiment. The enthusiasm born out of this spirit was thoroughly infectious and will, without doubt, drive comrades on to carry out revolutionary work back home.

What appeared clearly from the interventions of comrades from around the world is that dissatisfaction is widespread amongst workers and youth. The aim of the IMT is to reach the most radicalised layers of the movement; to grow in numbers and in quality so to be able to play a decisive role in leading the struggles across the world towards a socialist transformation of society. The mood of the comrades throughout the 2014 IMT World Congress was one of determination and enthusiasm to achieve this task that lies ahead.