Share
Tweet
There are about 1 billion people in the world subsisting on $1 a day or less. These people typically spend 80% of their income on food. For them the present food price rises mean catastrophe. Why are so many going hungry? Why are food prices going up all the time? These are the questions the United Nations Food and Agriculture Organisation has been asking at its meeting this June. So far it hasn’t come up with any solutions.

If we take the principle food grain prices at an index of 100 in January 2007:

There are about 1 billion people in the world subsisting on $1 a day or less. These people typically spend 80% of their income on food. For them the present food price rises mean catastrophe. 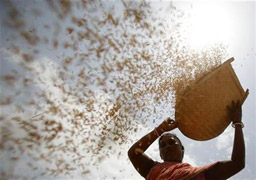 Why are so many going hungry? Why are food prices going up all the time? These are the questions the United Nations Food and Agriculture Organisation has been asking at its meeting this June. So far it hasn’t come up with any solutions. The problem seems here to stay as far as the FAO is concerned. The summit has been greeted with headlines such as ‘Food prices higher for foreseeable future, says UN.’

At present 850 million people are physically hungry. 130 million more are likely to join their ranks as food prices continue to soar. We will need to produce 50% more food by 2030 just to stand still, according to the FAO.

Even more, 3 billion people, nearly half the world’s population, can’t afford to eat properly and are malnourished in terms of vitamins and nutrients. 18,000 children die each day from hunger or from disease stemming from hunger. This is capitalism in the twenty-first century.

In an earlier article (Riots all over the world as food prices soar issue 162) Andy Viner identified the principal factors driving up food prices:

Hunger for the many can be very profitable for a few. How far are food prices driven higher by speculation? For Marxists speculation does not cause shortages, though shortages can lead to speculation – which makes the shortages worse. But the reality of food speculation should be viewed in the light of the present financial crisis.

As all sorts of other paper ‘investments’ go pear-shaped, fund managers of outfits such as pension funds are looking for safe havens to put their institutions’ money. Increasingly they have punted on Index Funds or Exchange Traded Funds. ETFs are bits of paper like shares or bonds, which track an index of assets. More and more they track the commodities index.

The fund managers would claim that if the ETF goes up, that is because the price of commodities (such as oil and cereals) has already gone up. They’re just following the herd. But George Soros (who knows a thing or two about financial markets) has accused them of blowing up a bubble. Here’s how.

Soros argues that a wall of money ($200 billion at last count) is powering up the future price of oil in particular. "The institutions are piling in on one side of the market and they have sufficient weight to unbalance it. If the trend were reversed and the institutions as a group headed for the exit as they did in 1987 there would be a crash,” he warned the US Senate.

Financial institutions also own enough wheat futures (1.3 billion bushels) to feed every man, woman and child in the world for 2 years. But this wealth is based on pieces of paper laying claims to the wheat harvest of 2009 and subsequent years, wheat that hasn’t even been planted yet, let alone been harvested.

The actual world stockpiles of wheat (real wheat that you can turn into bread or pasta) are actually at the lowest level for 30 years. US stocks are at the lowest level since 1948, when the American population is about half what it is now. Maize stocks in August 2009, when the harvest is gathered in, will be 685 million bushels, down nearly a half from the August 2008 stock of 1,283 billion. It seems that wall of money is not growing any actual food.

Now one of the things that make speculation more destabilising is the fact that food stocks have been run down? Does this show that ‘we’ are not producing enough food, that demand is greater than supply? It would be very sensible to have an adequate stockpile of food in case of mishap and to plan to produce enough to make sure nobody in the world goes hungry. But that is not how capitalism works. To achieve food security we need world socialism. Under capitalism how much is stockpiled is a private profit-driven decision taken by the handful of firms that dominate the world grain trade. These firms are the likes of Cargill, Bunge and Archer, Daniels Midland. Cargill is one of the biggest private companies on earth and does not like others to pry in their business affairs, but declared an 86% increase in profits this year. If these firms reduce their level of stocks, and therefore the world food stock, it is because it is profitable for them to do so. We can assume that it makes sense for them to sell grain stocks in a rising market.

The problem is not that the world is not producing enough food. Food production continues to outstrip the growth of population. To see the root of the problem it is only necessary to look at the richest country in the world, the USA, the biggest food exporter in the world, yet a land where hunger and malnutrition are rife. The 35 million Americans in food-insecure households have a problem. They haven’t got the money to buy food they can see looking at them on the shelves in the shops. Their problem is that they are poor. Likewise headlines such as ‘Poor in India starve as surplus wheat rots’ (New York Times Dec 2nd 2002) show that the basic problem of hunger is in the division between rich and poor under capitalism.

In any case in the European Union, in the USA and in all the advanced capitalist countries farmers (generally prosperous business people) are paid not to grow wheat. In Britain it’s called ‘set aside.’ Capitalism actually regards nature’s bounty as a nuisance.

The second reason that shows the problem is not lack of food production is this. Grain is only 4% of the price of a loaf of bread. The rest goes on baking, transport and packaging. Baking means oil, transport needs oil and packaging is made from oil. Even most of the cost of growing wheat is petrol – for the fertiliser, for the tractor, for grinding the flour and for transport to the bakery. So the rising cost of food is piggybacked on soaring oil prices.

There is speculation in the price of oil, no doubt about it. Tankers full of crude are cruising around going nowhere. Nobody will hire a tanker at $140,000 a week unless they believe the oil it carries will keep on rising in price. But, as all the speculators try to corner oil, then they are blowing a bubble, just as George Soros explained.

But speculation in petroleum is profitable because demand is outstripping supply. Ten years ago oil stood at $10 a barrel. Oil companies could not be bothered to search for new sources of supply, and the western world guzzled petrol on the grand scale. Now it’s panic stations. There’s talk about ‘peak oil,’ of output going into secular decline and becoming more and more difficult and expensive to extract. Certainly Britain’s false flush of prosperity from North Sea oil is at an end. Did you even notice it at the time? Indonesia has left OPEC as it’s no longer a big producer. And Mexico is due to become a net importer of oil in ten years or so.

What else is capitalism voraciously running us out of? Water. Water is described as ‘21st century oil.’ You can get green beans in the supermarket all the year round now. Often they are flown in from Kenya. But just to grow a single bean stem in Kenya takes 4 litres of water. Kenya is classified as a ‘water-stressed’ country. That water is diverted away from poor farmers who need to grow food to feed their families. Capitalism is despoiling the resources of the planet.

Biofuels are part of the shortage problem. They are not just a mistaken scientific experiment, though growing food crops to burn in cars is the economics of the madhouse. It takes 232kg of maize to make enough ethanol to fill a fuel tank with 50 litres of petrol. That could feed a family of four for a year.

Growing biofuels is all part of the policy of handouts to capitalist farmers. US farmers growing wheat or maize to make into car fuel is very inefficient, even compared with using Brazilian sugar cane. A barrel of ethanol costs $35 from sugar instead of $80 from maize. So why do it, then? As John Mauldin puts it, “One simple answer: Brazilian farmers do not vote at American elections. Idaho farmers do.”

Advocates of biofuels, basically George W. Bush and his dwindling bunch of supporters, argue that it ‘only’ provides about 1½ % of our fuel requirements. That’s missing the point. Almost a third of US maize production is being subsidised to be diverted away from the food chain. With demand and supply so finely balanced, with food stocks at a historic low, some believe the ethanol ‘experiment’ is responsible for half the recent rise in food prices.

Food insecurity is the product of the world division of labour imposed by world capitalism. We have recently seen a huge series of strikes and riots by workers and the urban poor in Egypt. No wonder. Poor families in Egypt can easily spend 70-80% of their income on bread. Rising prices are a catastrophe. Egypt is a fertile country. Twenty years ago, it was self sufficient in wheat. Now it is its biggest importer, along with Brazil. Brazil feeds much of the wheat to chickens, which it then exports all round the world. Egypt is a big exporter of rice. Egyptian capitalist farmers are selling rice on the world market while their own people go hungry. That’s business for you.

China was self-sufficent in food. Now it imports 40% of its needs. Industrialisation is gobbling up good farm land while urban workers demand to be fed instead of growing food on the land for themselves and others. Can we keep pace with more and more people, and more and more living in towns? Of course we can, but only if we plan the economy. To leave it to capitalism is to guarantee hunger and chaos.

The FAO, dominated by the advanced capitalist countries, has a solution to the problem of soaring prices and food shortages. It is more of the same system that has brought us to the present pass. Open the borders, stop food subsidies in poor countries (while rich country farmers continue to be cosseted) and export food while your people go hungry. It is madness.

Let us quote the critique of a partly penitent sinner. Jeffrey Sachs was described as the ‘Indiana Jones of economics.’ He was the one responsible for the economic policies that nuked the Russian economy in the early 1990s in the name of neoliberal ‘reform’. He comments, “Markets can’t step in and won’t step in when people have nothing. And if you take away help, you leave them to die.”