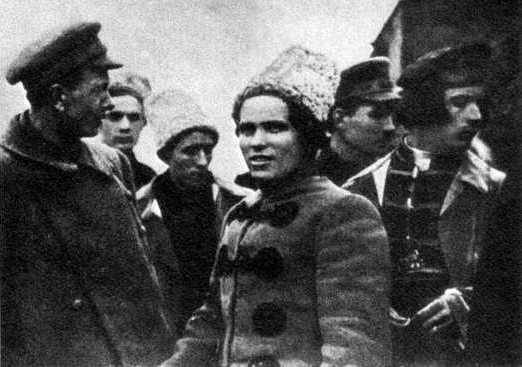 To this day anarchists hold up Makhno as the true champion of the workers and peasants of Russia after the 1917 revolution. This myth ignores the real nature of the Makhnovite army and the social layers that it represented. Because Makhno did not base himself on the working class but on certain layers within the peasantry, he ended up with what amounted to a reactionary position. 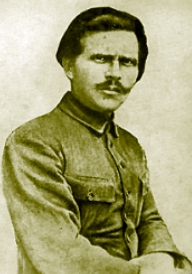 Nestor Ivanovych Makhno (October 26, 1888–July 6, 1934) Anarchists like to counterpose to the Bolsheviks the example of the peasant Makhno. They claim that, unlike the Bolshevik leaders, he was the real spokesman of the interests of the workers, the advocate of anarcho-communism, in contrast to Lenin’s “Party dictatorship”. So what was this phenomenon called Makhnovism?

The army of Makhno consisted mainly of peasants. And this fact was directly reflected in its character. The class basis of this movement was the petty bourgeois peasantry, and this was expressed in the extremely unstable character of its political line, which could just as easily align itself with revolution as with counterrevolution. That was fully revealed at the time of the Civil War in Russia. The peasantry was prone to pass from Red to White and back again, depending on the circumstances.

His strength was based mainly on the fact that the peasants, defending their own property interests, at this moment had before them a single enemy — Denikin. At this time in the Makhnovite armies, three quarters of the soldiers were made up of poor peasants. And in such a situation Makhno did not have any other alternative but to fight together with the Red Army, since only in this way could he could keep his influence over the Ukrainian peasants.

The Kulaks were above all interested in a free market in grain. Consequently, they now saw the main enemy as the Bolsheviks. The village poor, in contrast, understood that their interests were not represented by Makhno who, whether intentionally or not, was fighting to protect the Kulaks’ interests. Makhno declared that there was essentially no difference between mobilization against the Reds or the Whites.

As we have pointed out, at the beginning of the 1920s the numbers of Makhnovites began to decline sharply. The external danger posed by Denikin had by now disappeared, as the land which Denikin had returned to the landowners, had once again been transferred to the peasants. Therefore, those who now remained with Makhno were mainly drawn from the Kulaks, who were bitterly opposed to Soviet power. The withdrawal of the poorest peasantry from Makhno’s army provoked his anger. In May 1920 ,after the refusal of the peasants of the village of Rozhdestvensk to join his army, Makhno ordered his men to burn the village down, and opened fire on its inhabitants with machine-guns.

Even the Makhnovites themselves understood the hopelessness of opposition to the Soviet power. Makhno’s chief of staff, Belash, recognized that the Makhnovite armies were saved from complete disintegration only by fear of reprisals. Without this, they would have collapsed at once, after the liquidation of Wrangel. The irreversible decline of the Makhnovites begins at this point. Makhno’s army now more and more comes to resemble a gang of bandits.

The alleged anarchism of Makhno also raises many questions. This was the case even at that time. His policies eventually compelled some ideological anarchists to criticize him. The well-known anarchist Baron, a member of the secretariat of “Nabat”, wrote that: “It is better to disappear in a Soviet prison, than to vegetate in these notorious anarchical conditions”. At the all-Ukrainian Conference of “Nabat”, the delegates recognized that Makhno had ceased, in fact, to be an anarchist.

The truth is that Makhno was the spokesman of the interests of the prosperous peasantry, and acted accordingly. In order not to lose his influence among this layer, he tailed behind all its meanderings. The Kulaks were mainly interested in “cheap government”, in the abolition of taxation and in free trade. Thus, anarchism with its negation of the state was the best ideological cover for the creation of a Kulak volunteer army. It is no accident that the Makhnovite movement arose and flourished in the southern Ukrainian region where the Kulaks accounted for 20 % of the economy. Outside of this region Makhno never managed to establish a stable base.

It is impossible to abolish the state just be willing it away, as the anarchists imagine. The state will only wither away when the material conditions that gave rise to it have disappeared. For this reason, a regime of genuine workers’ democracy (i.e. the “dictatorship of proletariat” as Marx would put it) is an inevitable stage in the transition from capitalist slavery towards a classless society in which the state and every other manifestation of barbarism will be relegated to the museum of prehistory.