Sixteen years after the Good Friday agreement and ever so conveniently, just after the European Elections, the Stormont Assembly will shortly face a show down on the question of Welfare Reform, which is likely to illustrate just how toothless and lame the Assembly really is. But most importantly it will demonstrate the relationship between the DUP, Sinn Féin and the Westminster Government. 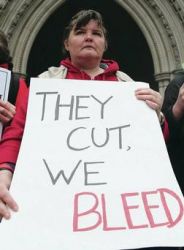 Essentially the British Government is threatening to cut funding to the North by £100m as a result of the Assembly “failing” to make welfare reforms as instructed. The real reason for the cuts of course is the fact the North has suffered gravely from deindustrialisation for decades. There are now more people on sickness benefits than there are in manufacturing industry in the North. In other words because of the size of the Welfare budget the ConDems are  hoping to pass on the austerity via the Assembly and its leaders.

“Mr McCausland has also said the Northern Ireland Executive received £6.5bn from the Treasury through tax credit and social security, with the contribution from the National Insurance Fund in Northern Ireland amounting to £2.5bn.

He warned that should the executive fail to agree welfare reform and therefore break with GB parity there was a "potential £4bn" shortfall for Northern Ireland's budget.“  Welfare reform: Mike Penning warns 'clock is ticking' on NI financial penalties 13/11/2013

Now however, the issue has come back into sharp focus. DUP Minister Simon Hamilton was reported by the BBC saying:

Simon Hamilton said that because no agreement had been reached, he was proposing a 1.5% cut across all departments.

“It’s a matter for the executive ultimately to agree what it wants to do to deal with £100m of reductions because of a failure to move forward with welfare reform.” said the DUP assembly member.

“If you were to do that on a pro rata basis and take it off all departments, you’d have health suffering to the tune of between £40m and £50m, you’d have education suffering around £20m in cuts and you’d have Deti which deals with jobs and the economy suffering £2m to £3m.”

The reason behind this position is the failure of the DUP and Sinn Féin to agree a common position regarding the cuts. According to the BBC “Stormont Education Minister John O'Dowd of Sinn Féin said the DUP was taking the wrong approach.

"The discussion we should be having, as an executive, is how to present a united front to the British government and stand up to them over these cuts," he said.

"Instead of the DUP having hot dogs and champers with the British government at Downing Street last week, what they should be doing is working with their executive colleagues to ensure the worst aspects of welfare reform are not imposed upon this society."

While it must be said that “hot dogs and champers” pale into insignificance in comparison to McGuinness dining with the Queen, the real issue here is what exactly the SF leadership have in mind. What do they intend to do to protest the cuts?

The answer is probably very little, maybe a few small demonstrations and a bit of rhetoric. But it seems that the damage has been done, despite attempts by Gerry Adams to limit the damage. According to the SDLP reported by the BBC:

He said Sinn Féin President Gerry Adams "pulled the carpet from under Martin".

Further on in the same article the DUP claimed that SF pulled out of a deal on welfare last year:

Mr Robinson said his party had reached a deal with Sinn Féin on how to implement the reforms 11 months ago, but said Mr McGuinness had been unable to sell it to senior Sinn Féin members of the Irish parliament (Dáil) in Dublin. Alex Attwood: Sinn Féin pulled out of welfare reform deal(BBC 6/4/2014)

Peter Robinson has talked about the “Nuclear Option”. That means really that the DUP are hoping to scare the Assembly with the prospect that London would impose a 95% budget on the North.

From a broader perspective however, the whole debate reflects the sterile blind alley of the Stormont Assembly and the Executive. After 40 years of armed struggle Sinn Féin and the DUP sit locked in a loveless relationship planning the bin collections and now trying to strike a deal over £4 billion in cuts. From Political Policing to Flegs the divisions remain. Yet from the perspective of the working class, the poor and the sick, those unable to work and reliant on welfare, the question would have to be: who stands for us, who stands for the ordinary people of Belfast, Derry, Newry, Omagh and Portadown?

The economic crisis and the neglect with which Capitalism has lavished the North in buckets over decades, is the reason for the scale of the Welfare bill in the North.

To the accountants in London however, the North is notable for being the most dependent part of their “United Kingdom”. The North has a higher proportion of workers in the state sector/state funded sector than anywhere in Britain; it also has a higher level of Economic inactivity. The North East of England is the British area with the most similar problems and it has been hammered by cuts over the last years. It was therefore a matter of time before the North was attacked.

The DUP leaders and the SF leadership (if these reports have any truth in them at all), are light years away from the conditions on the ground, whether in West or East Belfast. Having displaced the SDLP and the UUP, the SF and DUP leaders are looking over their shoulders. But they will be undermined by the economic and social crisis at every step.

This attack on welfare has been coming for years, yet SF seem to have made little attempt to argue against it. If a deal is struck as seems most likely it will make SF’s opposition seem toothless, while the cuts will inevitably affect the poorest and most vulnerable among the protestant community also.

The Trade Union movement in the North has a duty to defend its members against the cuts, but it has a responsibility also to fight the attacks on welfare. However in the absence of a mass working class opposition, the opposition to the cuts in Stormont will be weak and merely hot air.

The task of the Marxists in the North has to be to engage with the youth and the most politically conscious workers to begin the process of building a genuine Marxist Tendency. Ultimately the only answer to the crisis of capitalism, for either community in the North, is to break with capitalism and fight for a 32 County Socialist United Ireland.