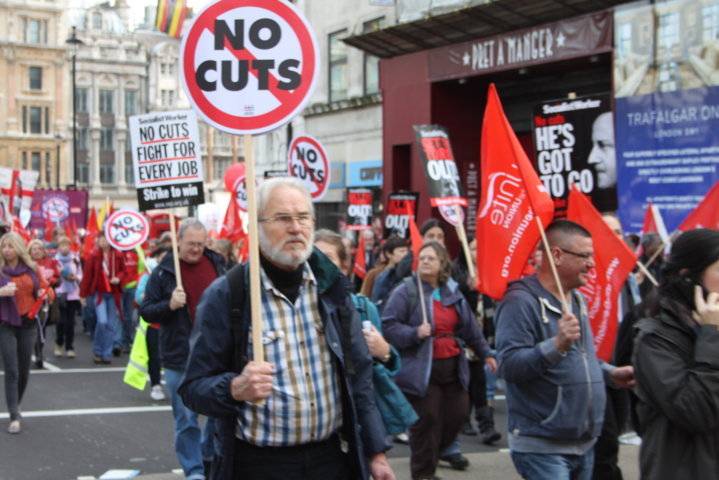 In the five years since the global financial crisis first exploded, life has been hard for Britain’s unemployed and working poor. The growing ranks of the unemployed have had their already insufficient benefits cut, disabled people have found themselves subject to demeaning and invasive work capability assessments, and low-paid workers have seen real-term wage cuts, attacks on pensions and employment rights slowly stripped away. All the while the cost of the basic necessities of life continues to soar, leaving millions of people struggling simply to get by. Yet, as bad as this might be, there is worse still to come.

From April a whole host of further welfare ‘reforms’ will begin to be rolled out. The list of attacks is staggering: the bedroom tax; abolition of council tax benefit; overall benefit cap; 1% up-rating cap; the introduction of Universal Credit; and the 20% cut to disability benefit. All of these will be introduced more or less simultaneously.

What has become popularly known as the “bedroom tax” is a cut to the amount of housing benefit social housing tenants will receive if they have a spare room. Benefits will be reduced by 14% for one room and 25% for two or more bedrooms. This means that, on average, the 660,000 households affected will lose £14-£25 a week.

The government claims that this measure is designed to address the chronic shortage of social housing by freeing up under-occupied homes. But, as with most things the Tories and their Lib Dem lackeys tell us, the reality is far different. Two-thirds of affected households have disabled people in them, for whom moving is almost impossible. Many will have made expensive adaptations to their properties which would be difficult to recreate if they were to move, either through a lack of money or because a private landlord would refuse to allow it. In effect, the Bedroom Tax penalises disabled people for being disabled.

There are thousands of examples of people for whom moving is simply not an option. One woman interviewed on television explained how she suffers from complications related to bowel cancer. In order to survive she has to receive nutrition through a machine and uses her second room as a sterile medical room to do this. On top of the pain and suffering inflicted by her illness, the government is now proposing to charge her £740 a year.

Even the government admits they expect 80% of people just to pay the tax rather than move. As such, the bedroom tax has nothing to do with freeing up social housing; it’s just one of many ways that the government is making the poorest pay for a crisis they did not cause.

The housing benefit caps introduced in April 2011 have already made private rented accommodation unaffordable for thousands of unemployed and working poor. This has led to a 17% increase in homelessness and a 23% rise in rough sleeping over the past year.

The number of families being put up in temporary accommodation over the legal six week limit has risen a staggering 800% since the coalition took power. The situation is made worse by the UK’s deep housing crisis and chronic shortage of social housing, yet the government continues to sell off homes under the Right to Buy scheme, whilst councils dismantle structurally sound estates and sell them off to private developers.

In London, where rents are highest, the overall benefits cap, which limits total benefit payments to £500 a week per family (including rent), will make an already dire situation worse, with over 20,000 families facing eviction because their benefits will no longer cover their rent. They will be faced with the stark choice of feeding their kids or paying to keep a roof over their heads! There simply won’t be the money to do both.

London boroughs are presently looking at ways to unload their homeless families onto other authorities. At least 17 boroughs have already started sending people outside of London. Authorities are even buying cheap properties in places like Merthyr in the Welsh valleys and Yorkshire to house London’s homeless!

The government argues that the housing benefit cuts are necessary to drive down rents, yet 2 years after the reforms were first introduced rents continue to rise.

The central problem is not the level of housing benefit but the fact that the housing crisis means there is insufficient supply to meet demand. If the demand for housing is high but the supply is low, rents will go up as landlords can charge what they want. They have a captive market.

The shortage or lack of available housing can only be resolved through the building of at least a million homes over the next 5 years.

Meanwhile the government continues to spend millions of pounds a year on housing benefit which goes straight into lining the pockets of private landlords. This scandal requires the immediate introduction of rent controls and the expropriation without compensation of the properties of the biggest landlords.

This year will also see the abolition of Council Tax Benefit, the most widely claimed benefit with 5.9 million recipients in the UK. This will mean that millions of unemployed and low income families will be expected to pay council tax for the first time in their lives. With incomes already cut to the bone by rising energy, housing and food costs, as well as the myriad of other benefit cuts already outlined, this has the potential to be the straw that breaks the camel’s back.

This will result in mass non-payment, not because people won’t pay, but because they can’t. When faced with a choice between paying the tax or feeding your children what parent would choose to pay? Already councils are estimating 84% of people will refuse to pay leading to a potential annual loss to council budgets of up to £500 million nationally which will inevitably be made up by further cuts to services. Even some senior Tories understand the implications of this and are warning of a repeat of the mass non-payment seen with the Poll Tax. The potential exists for a mass campaign of non-payment to be launched today, yet in Britain no organisation exists that is prepared to take the lead in organising one.

Impact of the attacks

Amongst the barrage of figures it can be difficult to understand quite how bad the cumulative impact of these attacks will be. This can be illustrated by a simple case study. John was made homeless at the age of 17. Fortunately, the local authority was able to house him in a two-bedroom council flat. He currently receives £56 a week in Job Seekers Allowance but from April will have to pay £14 a week for the bedroom tax and £3 a week in Council Tax. After utility bills this will leave him with just £11 a week to survive on. This is an impossible task and one that will be faced by thousands!

The simple fact is that the welfare reforms will leave people without resources to feed themselves or their families. That children or adults should go hungry in one of the most developed countries in the world is scandalous and an indictment of capitalism’s inability to provide the most basic necessities of life for all who require them. Already 27% of children grow up in poverty in the UK and these reforms will result in a further 400,000 children joining them. This is why the welfare cuts of the government must be stopped!

The reason that the Tories are placing the heaviest burden of cuts on the welfare budget is because they believe that the unorganised masses of the unemployed and the poor will be unable to resist these attacks. The only solution therefore is to get organised and fight back!

We wholeheartedly support both Unite the Union’s announcement that they are making fighting the welfare cuts a priority and the excellent initiative of launching a ‘community membership’ scheme for organising people in local areas alongside those in workplaces. We urge benefit claimants to join their local Unite community branch and help to build an organisation capable of defeating these attacks. But if Unite are to be successful, they must be armed with a correct programme and tactics.

Only a truly mass movement aimed at bringing down this rotten bosses’ government can defeat the welfare attacks. This must be organised through the labour movement, uniting workers, tenants associations and local community groups to build a formidable force capable of toppling the government. This is not just a pipedream. It was such a movement, led by the Militant, that formed the Anti-Poll Tax campaign that finally got rid of the Thatcher government.

Such a movement cannot limit itself to legal means. The Anti-Poll tax campaign was built around illegal non-payment and this militancy was the basis of its success. Similarly a programme of organising local committees to defend families from eviction and the attacks of thuggish bailiffs will be necessary. The full force of the law will be brought to bear and this can only be resisted on a mass basis.

Labour and the cuts

Unfortunately, the Labour leadership has failed to properly oppose these attacks, even accepting and repeating the Tories ‘lazy benefit claimants’ rhetoric in places. Scandalously, the party instructed MPs to abstain in a recent vote to retroactively alter Workfare legislation to ensure that the thousands of benefit claimants who had been illegally sanctioned would not be able to reclaim their lost benefits.

The Labour leadership needs to decide whose interests they represent: is it the workers and the poor or the bosses? If they are to live up to our party’s name and defend the position of the exploited and downtrodden in our country, they must commit to reversing every single one of these cuts and produce a programme for jobs and house building that addresses the real reasons why people are on benefits in the first place.

However, as we have explained before, this cannot be done on a capitalist basis. The resources exist in society to do so but they are in private hands. Only by taking control of the wealth that we create can we democratically plan the improvement of our society. Otherwise the only choice is austerity and the never ending misery which accompanies it.

Source: Welfare attacks and the fightback