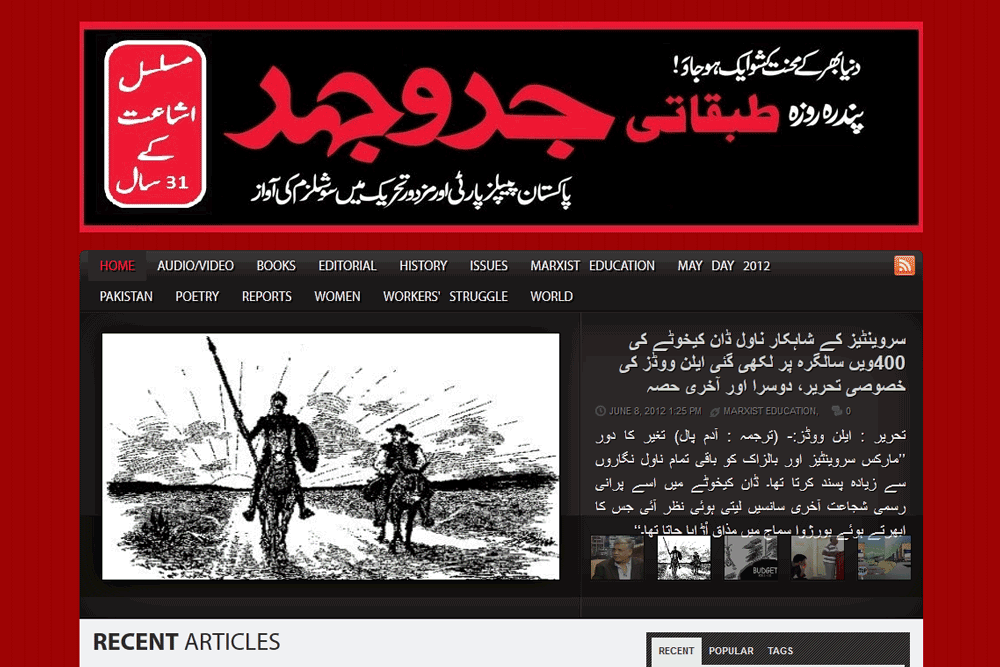 Pakistan has one of the largest numbers of internet users in world despite its crumbling economy, rotten infrastructure and political & social instability. This is a striking example of “uneven and combined development” under capitalism in so called third world countries. The development of the new website of The Struggle tendency is a step forward for the work of the IMT in this country.

Internet came to the mainstream in country at the end of 1990s. Enormous profits in this large market and deregulations urged many local and multinational companies to make large investments in the sectors of information technology and telecommunication in 2000s. According to estimation by World Bank in 2010, more than 16% of the population was using internet in one way or another.[1] According to the evaluations by International Telecommunications Union (ITU) in 2011 the country had more than 20 million internet users.[2] Almost every famous media group (Urdu & English) in Pakistan publishes an E-Paper and hosts a blog on its website.

Fortnightly Tabqati Jeddojehad (جدوجہد طبقاتی), the organ of The Struggle has been published for more than 31 years now. The magazine publishes articles with Marxist positions on current affairs, national & international developments, politics, economics, history, theory and issues of women, youth & workers. It also publishes reports regarding student politics and the labour movement in Pakistan. The Struggle Publications also publishes books and translations of important books on such topics.

There was a large amount of material that could attract wide range of audience if published on the web in an organized and attractive way. The revamped website was officially launched at struggle.com.pk on December 22, 2011 with few articles available and it was somewhere around 6.5 Million on Alexa Ranking, which means there were about 6.5 millions website on internet with better traffic than struggle.com.pk). With the inclusion of more material and categories the ranking started to improve. Within a few months the website was below 2 million Alexa Rank as more people started visiting it on regular basis. As par June 7 2012, more than 218 articles/reports have been published under 13 categories and website has achieved an Alexa rank of 232,653 and it is improving almost every week. The website is being ranked at #1459 in Pakistan and #472 in the city of Lahore. More than 35000 pages have been viewed since the launch. It means almost 250 pages are being viewed on daily basis. Besides Pakistan, the website is being read in United Kingdom, United States, Germany, India, Saudi Arabia, United Arab Emirates, Spain, Australia and many other countries in Europe and Asia. Many people have contacted The Struggle through the website. Since its launch, the website has been updated with fresh material on daily basis. It is not only helping to spread the ideas of Revolutionary Marxism within the advanced and educated layers of Pakistani society but projecting the marvelous work of Marxists here as well.

Bearing the progress already made in mind, it can be said without doubt that the website would soon be into mainstream within the online political circles of Pakistan. Bolshevik organizations rely onto their own sources for propaganda and www.struggle.com.pk is a successful step forward in this journey.