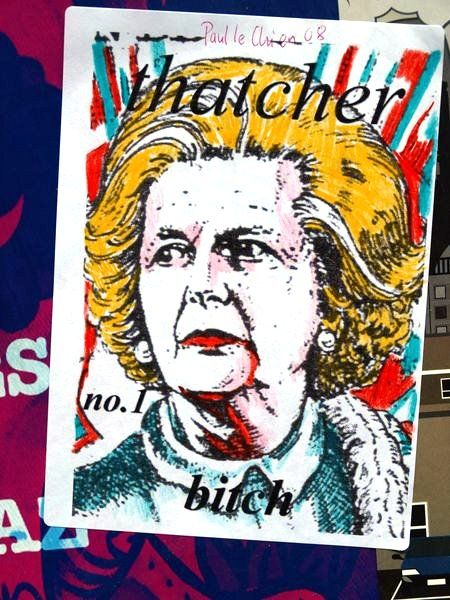 The death of Margaret Thatcher has provoked sickening images of odious politicians praising her role in British politics. She put the “Great” back into “Great Britain”, it is claimed. On the other hand there were public celebrations in some parts of Britain (and private celebrations all over Britain) and public expressions of joy in working class nationalist districts in Belfast and Derry.

Irish Republicans have many reasons to hate Thatcher. It was her public role that we hate. On a private level one can sympathise with a family on the death of a frail, mentally impaired old lady of 87. This writer normally would, believing it is usually best not to speak ill of the dead. After all it was Che who wrote, “Let me say at the risk of seeming ridiculous that the true revolutionary is guided by great feelings of love.”

However, there are exceptions and Margaret Thatcher was one such exception. Both on a personal and a political level she was a vile, odious creature devoid of empathy with other human beings; a bully, a power monger, a woman who despised feminism and adopted the worst of machismo. She had no redeeming features except for those who worship at the altar of Imperialism, Capitalism and the God of Mammon.

Thatcher’s role in Ireland was to suppress by any means possible the demand for the national independence of the whole island and the undoing of the partition of the island. In that she is no different from all other British Prime Ministers. It has always been the case that in the interests of the British ruling class Ireland needs to be controlled so that there can exist no threat to British interests. That has been the case since the Normans first came to Ireland.

Throughout the centuries through conquest, plantation, plunder, torture, pitch capping, bribery, religious intolerance, ethnic cleansing, land clearances and repression, the British ruling class has maintained a foothold in Ireland with the help of the descendants of the plantations and the willing collaboration of nationalists happy with the half a loaf that they were bribed with.

Thatcher, when she came to power, saw only one solution to the ongoing armed resistance by Republican forces in Ireland – repression. Under the previous Labour Government a process had begun to criminalise Irish Republicans. This had begun under Roy Mason and had led to the so called dirty protest by many Republican prisoners, eventually leading to two major hunger strikes in 1980 and 81. 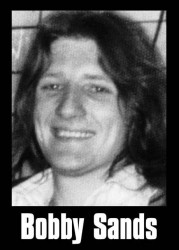 In 1981, Bobby Sands, on hunger strike, was elected to Westminster as the MP for Fermanagh South Tyrone. Despite this political endorsement by the electorate, Thatcher allowed Sands and nine other brave hunger strikers to die in pursuit of demands which were granted but only after their deaths. She showed callous disregard for their plight, labelling them criminals and ignoring the demands of nationalist Ireland.

She also approved the selective assassination of leading H-block leaders utilising both British murder squads and loyalist sectarian hit squads. She gave the go ahead for shoot-to-kill policies by both the RUC and the British Army and allowed three loyalist paramilitary groups to collude with the Apartheid state in South Africa and import thousands of weapons later used to kill hundreds of Irish Republicans and innocent Catholics.

So there are plenty of reasons for Irish Republicans to despise and hate Thatcher.

But Irish Republicans have always been used to the tactics of British repression. What was different about the Thatcher regime was it used similar tactics against its own working class. From the end of World War Two there had been a general consensus that the role of the state was to assist those most in need and that the state needed to control major utilities such as power, transport, etc. Partially this was because labour movement reforms and the establishment of the welfare state proved so popular that even during a previous period of 13 years of Tory rule the Conservatives had felt unable to pursue their normally laissez faire capitalist economics to benefit their own elitist supporters.

Thatcher was an instrument of the liberal economics of the likes of Friedman, which were in essence the removal of any restraints to the so-called “free market”. Thatcher unleashed the so-called green grocer economics on the British working class. Back to the monetarism of the 1930‘s! This involved the deregulation of the financial markets, tax awards for the rich, privatisation of public amenities, anti-trade union legislation and the full force of the state against their opponents, just as in Ireland.

Backed by the Murdoch press and whipping up nationalist fervour Thatcher went to war over the Malvinas and authorised the sinking of the Belgrano well outside the conflict zone. This, at a time when the Tories were well down in the polls, meant she was able to use British nationalism to hold on to power in two subsequent elections.

During this time she then declared war on the “enemy within” and broke the NUM. Paramilitary police smashed into working class mining districts. The north of England was de-industrialised as engineering, the steel industry, including the decimation of Corby, mining and shipbuilding were stripped bare. The plight of Geordie workers having to emigrate to Germany to work parallels the Irish experience of emigration:

We had no way of staying afloat

We had to leave on the ferry boat

On the run to Germany

We had the back of Maggie's hand

Times were tough in Geordieland

We got wor tools and working gear

And humped it all from Newcastle to here

Why aye man, why aye, why aye man

Why aye man, why aye, why aye man

In the dust and dirt and the racket and the noise

Drills and hammers, diggers and picks

United Nations what we've got

Thatcherism denied there was any such thing as society thereby giving carte blanche to “the greed is good” philosophy that swept the financial centre of London and other cities, eventually leading to the drastic austerity that we have today.

During this period many Irish Republicans came to recognise an affinity with the beleaguered British working class and solidarity with the miners was well expressed. This empathy with fellow workers in Britain contrasted with the attitude of previous generations of Republicans who adhered to an old slogan: “Burn everything British but their coal”

While there had always been a stream of Republican socialism which adhered to the internationalism of James Connolly, the struggles of the British working class against Thatcherism in the 1980‘s inspired more Republicans to look to international solidarity between all workers. Even today, when Irish Republicanism is split and sundered, the majority of the Republican factions all proclaim their internationalism. That is a far cry from the narrow nationalism of the 1940s, 1950s and1960s.

The class war never goes away. In Thatcher’s day she openly proclaimed it with her “us and them” approach and her open contempt for the lives of working class people, her decimation of the industrial north and the unleashing of brutal force against miners, the Irish, Argentines and all who opposed naked capitalism.

Today, in the midst of a world recession and with austerity, the watch word of the ruling classes is now “we are all in it together”. Whether in Britain, Ireland, North or South, or across Europe, the class war still continues but now without the stridency of Thatcherism, but still with its methods. Now, rather than smash the Unions, the new Thatcherites try to incorporate the labour bureaucracies through deals, like Croke Park 2, into voluntarily giving up even more of the gains made through centuries of struggle, gains such as trade union rights, education, healthcare and employment.

It matters not the identity of our rulers, Irish or British, Catholic or Protestant, it is what they are now doing that must be resisted. Trade unionists, socialists, Republicans, Catholics, Protestants and all other religions or none, and working class communities throughout the British Isles, all have a common interest in resisting the austerity programme that blames us, the workers, for the excesses of the bankers, money lenders and gamblers of the financial institutions.

North and South, East and West, it is in the interests of all workers to resist austerity, to throw out the coalitions in the British Isles and put in power only those empowered with a socialist programme to act in the interests of the working class.

Now that Thatcher is dead, let us smash Thatcherism! On the day of her funeral let us all wear red in memory of all workers who suffered under her policies.