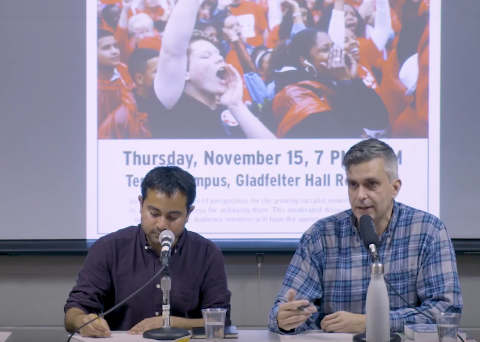 On 22 November 2018, Bhaskar Sunkara and John Peterson participated in a panel organized at Temple University in Philadelphia by the Temple Marxists, YDSA, and the Utopia Film Club. The editors of Jacobin and Socialist Revolution gave their definitions of socialism, analysed the current state of the socialist movement in the US, and provided their views on the perspectives for a socialist future. The discussion covered a wide range of basic topics of socialist theory and politics, such as the nature of the capitalist state, the role of the Democrats and the two-party system, the state of the US labor movement, and more.

At a time when millions of Americans are rejecting the status quo and looking to socialist ideas, events such as this provide an invaluable opportunity to exchange ideas to clarify the way forward for the movement, and the role that socialist publications and organizations can play in this process.