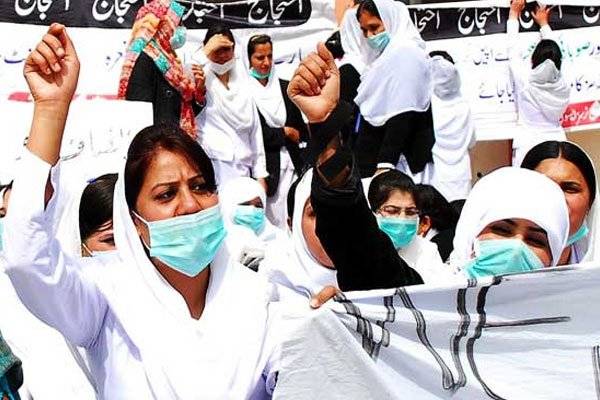 2800 female nurses have won their struggle against the government in Punjab. Despite their brutal and vicious tactics, the government had to face a humiliating defeat.

On 11 March, ad hoc nurses from different government hospitals in Lahore started a protest, in front of office of the Punjab Director General Health. They were protesting the recent dismissal of 2800 nurses. But not only did the Punjab Government refuse to accept the demands of the nurses, on 14 March it deployed the police to baton charge the protest. 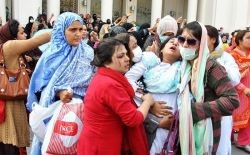 In this violent and brutal attack a seven months pregnant nurse was severely injured and only narrowly escaped death. 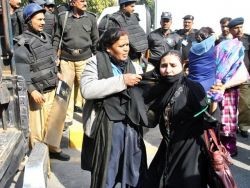 Instead of defeating the movement though, this brutal act of state violence only served to escalate the struggle. The initial offer from the government negotiating team - led by Punjab Health Adviser, Khawaja Salman Rafiq - only offered the nurses minor concessions. However, the nurses defied the violence and refused to accept this offer. Instead they escalated and broadened their movement. 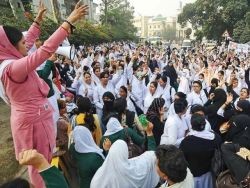 The government tried to use the classical tactic of divide and rule to defeat the nurses. They offered to promote some of the nurses from the Young Nursing Association; a few of the leaders were also offered personal benefits. But the presence of the comrades of Pakistan Trade Union Defence Campaign defeated these moves. After the police had attacked the protest the comrades and the leadership of the nurses took up the call to spread the movement across the whole country. Protests followed all over the country, in all of which the comrades from PTUDC participated. Workers’ organizations in Faisalabad, Rahim Yar Khan, Multan, Layyah, Quetta and other cities expressed their full support. A protest was also organised by PTUDC at National Press Club Islamabad in which leading trade unionists took part.

In Lahore, the president of the Young Doctors Association of Punjab, Dr. Javed Aheer, condemned the brutality of the Punjab government and joined in the protest to express the complete support of Young Doctors. The leaders of the Hospital Workers Association also supported the protest. From janitors to young doctors, all layers of workers participated in the protests. This was a great show of unity by the workers in the health sector. This disproved the false social and moral values which are being put forward by the ruling class. The young doctors, nurses and hospital workers joined hands to defeat the government’s policy of “divide and rule”. 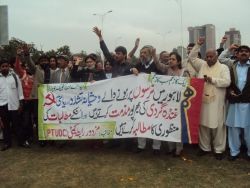 The comrades of PTUDC not only expressed complete solidarity with the nurses but also exposed the tactics of the government from the very first day of the movement. On 9th march, just one day before the sit in, PTUDC organized a huge rally on the Mall road against privatization and anti-people policies of the government. A large number of trade union activists and leaders from all over the country participated in this protest. This inspired the nurses, who had previously only protested in their hospitals, to organise the 11 March protest in front of Awain e Iqbal which is just next to the Punjab Provincial Assembly.

Comrade Aftab Ashraf and comrade Atif Ali played an active role in organizing the sit in and Dr. Tajjamul Butt, Dr. Farhan Gohar, Dr. Valeed Khan, Dr. Ejaz Ayub, as well as Dr. Faizan Akram from YDA played an important role in the securing the success of this movement. PTUDC Lahore invited other worker organisations to support the protest bringing comrade Zafar Iqbal from the Postal Workers Union and other labour activists to support the protest. The organizer of the Progressive Youth Alliance comrade Imran Kamyana and the secretary of BSO Pajar Punjab comrade Zareef Rind also participated in the protest along with others. They unconditionally supported the demands of the nurses and expressed their full solidarity with their cause.

This victory has given the nurses strength and they are calling for more the setting up of better organisations for the future. It is possible that the government will attack the concessions they have given today. We must prepare for this by uniting all the workers in the health sector and join them to other workers’ organizations. Only thus can we defeat these attacks and the repression and violence of the state. A Workers’ Coordination Committee has already been established in Mayo Hospital Lahore. All other hospitals should follow this example. The workers have only their chains to loose and a world to win. Workers of the World Unite!