At 7.45pm on the 20th July around 25 workers at the Vestas wind-turbine blades plant in Newport, Isle of Wight moved to occupy offices in protest at the planned closure of the site and the loss of 625 jobs - 525 on the Island and 100 in Southampton. 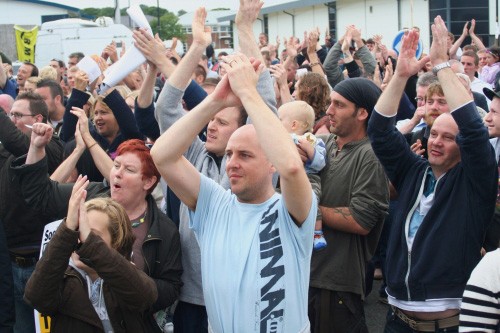 The Isle of Wight is the most deprived area in the South of England with already high unemployment. Vestas blades, one of the largest employers on the Island are moving production of turbine blades away from the site to China and the USA. Vestas workers have spoken of the aggressively anti-union stance adopted by the bosses. Management had made it clear in the past to workers attempting to organise and unionise that it would not be tolerated. Those that went down this path were identified by management and were the first to go when redundancies came round. There are a number of individual workers who are members of Unite, but the majority are not members of any union. Without the presence of a trade union the management were able to impose their will against the workforce with greater impunity.

The workers at Vestas Blades had thought their jobs were secure. Green energy is a new industry with a hugely increasing importance. The workers had been able to speed up blade production from 48 hours to 18 hours. Despite tolerating this and their efforts made to ensure their jobs, they are headed for the dole queue. Vestas Blades is a profit making factory. Turbine blades are going to be in increasing demand - Britain enjoys the best wind resources in Europe and the government's target is to increase wind power production from 5% to 35% by 2020. Production should not be stopping and the workers should not be losing their jobs - the government recently announced its plan to create 40,000 'green' jobs over the next 5 years.

The Vestas management have said that the specification of the blades manufactured at the site are not suitable for wind-turbines used in Britain - but for the American market as component parts of a different design. Disgracefully the government have accepted this argument - where there exists a skilled workforce facing the dole queue, an existing factory and transport infrastructure for the blades. What should be happening is the re-equipping of the factory as necessary for the British design in the first instance and use of the skilled workers available to maintain jobs and production. 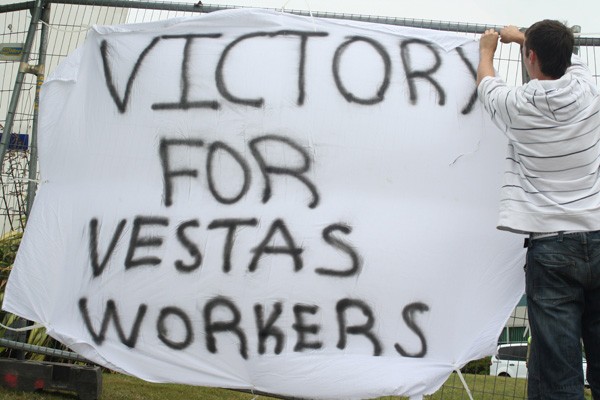 Ed Miliband, Secretary of State for Energy and Climate Change, in the Guardian writes "Despite a 67% increase in offshore wind generation last year and 29% increase in onshore wind, they do not yet have sufficient orders. We need to grow the market further to help". New Labour's ideological devotion to the 'market' - the same 'market' economy that has given us recession we are now in - is wheeled out in excuse of the closure. The occupying workers have called for the nationalisation of the factory to ensure it stays open - and this is correct and what should be happening. The government has committed to building 10 new nuclear reactors. 10,000 wind turbines would equal the electricity output of these reactors. £56 billion of tax payers money is being used to fund the clean up of the UK’s current nuclear sites (run by the Nuclear Decommissioning Authority), which could buy 50 GW of installed wind capacity, equivalent to 20% of the UK’s electricity needs. An order for wind turbines should be placed now, production started and the blades stockpiled for installation. Vestas management have made it clear that they want to up sticks and try and make more money elsewhere. If they are not prepared to keep the factory open then it must be taken into public ownership and put to use.

Vestas have also cited the existence of a larger market in America and by closing the site they are removing "excess capacity". It is not the case that they are making a loss here, but that they think the company could make more profit elsewhere. In the first quarter of this year sales were up 59%, bringing in £950million. What doesn't appear on the bosses' balance sheet is the cost in terms of damage done to ordinary people - 625 workers losing their livelihoods and the wider effect it will have on the Isle of Wight economy.

The public here are overwhelmingly in favour of wind-turbine blade production continuing on the Island, and there is substantial support on the mainland for the only major facility manufacturing blades in the country. When it comes to industry what you and I think matters little to the people who own and control the wealth and make the decisions - the people that own the factories, machinery, tools and everything else we need to work. Private ownership of the economy, as in this case, means putting working people's lives at the whim of greedy bosses who operate to one principle: profit. That is the reality for the overwhelming majority of people who have to go out to work and earn a wage - the working class. Against the bosses our only defence is our collective strength and solidarity. Organised in a trade union we are stronger and can stand up to the bosses. This is the first step that should be taken by Vestas workers and workers elsewhere.

In the long run the only way to ensure a decent standard of life for all is to do away with the boss class altogether. The demand must be for nationalisation to ensure the livelihoods of the workers at Vestas - for now. The power of the bosses over our jobs must be removed altogether. The bigger fight - encompassing not only Vestas but every workplace - must be for public ownership and the direct control of production by the working class as a whole, exercised in the first instance by the shop floor. This is the only way to guarantee everyone's jobs and ensure our lives are not put at the mercy of the bosses and their 'market'.