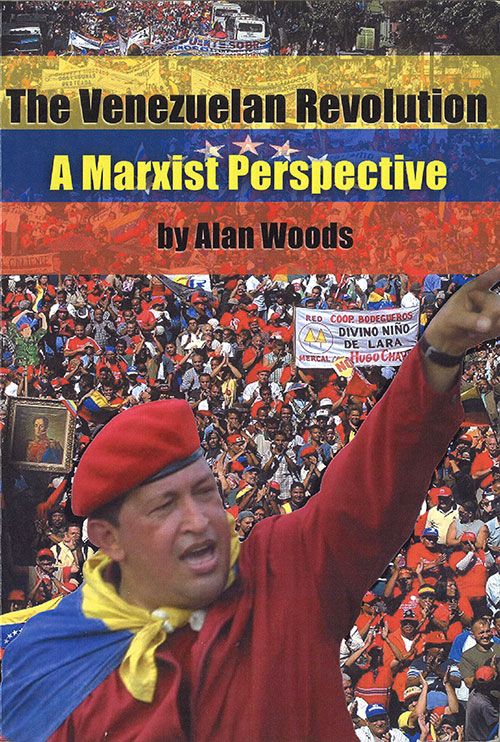 This book is a collection of articles by Alan Woods, which traces the history of the Venezuelan Revolution through all its most important stages right up to the present. The author has been a consistent champion of the Venezuelan Revolution since its inception. He helped to initiate the Hands Off Venezuela Campaign, which has been spectacularly successful and is now active in more than thirty countries. He is well known in Venezuela, which he has visited on several occasions and spoken to big meetings of Bolivarians, and given interviews on radio and television. He has also held personal discussions with President Chávez, which are recounted in this book.

It is worth pointing out that the author took a firm stand in support of the Venezuelan Revolution at a time when practically the whole of the Left took no interest in it and even denied that there was a revolution at all. Several of the articles reproduced here are aimed at combating sectarian prejudices towards the Venezuelan Revolution. Only very recently, after President Chávez has publicly come out in favour of socialism has there been a marked interest in Venezuela in the European Left, which still remains absolutely confused concerning its character and perspectives. However, as these articles will show, Alan has always pointed out that the only way forward for the Bolivarian Revolution is socialism:

“Right from the beginning we have pointed out that the Venezuelan Revolution has begun, but it is not finished, and it cannot be finished until the power of the Venezuelan oligarchy is broken”, he writes. “This means the expropriation of the land, banks and big industry under workers’ control and management. It means the arming of the people. It means the setting up of action committees linked up on a local, regional and national basis. It means that the working class must organise independently and strive to place itself at the head of the nation. And it means that the Marxist tendency must strive to win over the majority of the revolutionary movement.”

There can be no doubt that Latin America is currently in the vanguard of world revolution, and within the Latin American continent, Venezuela is in the front line of this revolutionary process. It would be no exaggeration to say that Venezuela is now the key to the international situation and the developing world revolution. It therefore follows that the class-conscious workers and youth in Britain and elsewhere must follow the events in Venezuela very closely and assist the revolution with every means possible.

This book by Alan Woods is essential reading for all those who want to understand what is happening in Venezuela today. But this is no mere description of events. It is a powerful Marxist analysis of the Venezuelan Revolution, its weaknesses and strengths, its contradictions and unique characteristics. The book was not written with the wisdom of hindsight. Every chapter, beginning with the coup of April 2002, was written as the events were unfolding, and traces the course of the revolution through all its vicissitudes.

These articles, which were published in our website Marxist.com, appeared almost simultaneously on the Spanish language website of El Militante. We know that they had a big effect within Venezuela itself. They struck a responsive chord in the revolutionary activists and many Bolivarians were keen to read and study them. They were immediately downloaded from the internet and printed out, pinned to notice boards and circulated by hand amongst the Bolivarian Circles and trade unions. This shows the degree to which our analysis corre- sponded closely to the living experience and aspirations of the masses.

It was the impact of Alan Woods’ articles that enabled us to come into con- tact with the most advanced and class-conscious elements within the Bolivarian movement. It demonstrated the possibility of establishing a dialogue between the Marxists and the Bolivarian activists and this has borne fruit with the creation of the Revolutionary Marxist Current, which is growing stronger every day. The secret of its success lies in its ability to link the immediate tasks of the national democratic revolution with the question of workers’ power. The article “Theses on revolution and counter-revolution in Venezuela” skilfully outlines a transitional programme, which acts as a bridge from the immediate day-to-day tasks to those of the socialist revolution.

The book is being published at a decisive moment. Events within Venezuela are unfolding with lightning speed. The coming to power of Hugo Chávez in 1998 opened the floodgates for social change. It marked the beginning of the Venezuelan Revolution as the masses poured onto the stage of history determined to put an end to the rule of the oligarchy. But, as Alan Woods has consistently argued, under present day conditions it is impossible to achieve these goals without a radical break with the bourgeoisie. This analysis has been shown to be correct. Over the past five years, the demands of the Bolivarian Revolution – in essence the demands of the national-democratic revolution – of national independence, land reform and increased democracy, have repeatedly come up against the constraints of capitalism and the ferocious resistance of the bourgeoisie, backed by US imperialism.

The Venezuelan Revolution, having scored a series of important victories, now stands at the crossroads. To succeed it cannot stand still. It has aroused the burning hatred of world imperialism and its local agents, the corrupt oligarchy, who are hell bent on its destruction. They can never be reconciled to the existence of the revolution, which acts alongside Cuba as a beacon to the masses throughout Latin America. That explains their continued attempts to overthrow the regime of Hugo Chávez, which is now being expressed in the efforts of the so-called anti-terrorist George Bush to organise a terrorist assassination of the President.

The frenzied hatred of the imperialists is no accident. The recent sharp turn to the left within Venezuela, represented by the nationalisations of Venepal and CNV and Hugo Chávez’s speeches in favour of socialism, expresses the forward march of the revolution. “I am convinced, and I think that this conviction will be for the rest of my life, that the path to a new, better and possible world, is not capitalism, the path is socialism, that is the path: socialism, socialism”, stated Chávez recently. This represents a decisive change in Hugo Chávez, who in the past tried to work within the confines of capitalism. Of course, the task now is to translate these words into deeds.

President Chávez has on several occasions made favourable references to Trotsky’s theory of Permanent Revolution. This states that the tasks of the national-democratic revolution can only be achieved by the working class and oppressed masses coming to power and proceeding in an uninterrupted (hence “permanent”) manner to the socialist tasks. The revolution begins in one country but in order to succeed has to spread beyond its borders.

The counter-revolutionary role of the bourgeoisie was already understood by Marx and Engels, who originally coined the term “Permanent Revolution”:

“… it is our interest and our task to make the revolution permanent, until all more or less possessing classes have been forced out of their position of domi- nance, until the proletariat has conquered state power, and the association of proletarians, not only in one country but in all the dominant countries of the world, has advanced so far that competition among the proletarians of these countries has ceased and that at least the decisive productive forces are concentrated in the hands of the proletarians. For us the issue cannot be the alteration of private property but only its annihilation, not the smoothing over of class antagonisms but the abolition of classes, not the improvement of existing society but the foundation of a new one.” (Karl Marx, Address to the Central Committee to the Communist League, March 1850).

Nowadays the vision of Bolivar retains all its force and validity. But it cannot be realised by the so-called national bourgeoisie, which, as Lenin explained many times, is capable of playing only the most reactionary role. This has been amply demonstrated by the attitude of the Venezuelan bourgeoisie to the Chávez government. The perspective of Bolivar therefore remains an objective necessity, but in the context of the 21st century it can only be realized through the creation of a democratic Socialist Federation of Latin America, as a stepping-stone to a World Federation of Socialist States.

In the period of more than a decade since the collapse of Stalinism there has been an unprecedented worldwide ideological offensive against Marxism and socialism. We are informed that history has ended, that the only system possible is the capitalist system, and that revolution is off the agenda. The experience of Venezuela shows that this is false. The Venezuelan Revolution is a fact. And it is equally a fact that through its own experience it is coming to the same conclusions that were pointed out by the Marxists – and specifically by Alan Woods – in advance: that only by expropriating the landlords and capitalists and moving towards socialism can the Venezuelan Revolution succeed.

The victory of a socialist revolution in Venezuela would shake the capitalist world to its very foundations. It would spread like wildfire throughout Latin American, where there is not a single stable bourgeois regime from one end of the continent to the other. A victorious socialist revolution in Venezuela would change the world. On the other hand, the defeat of the revolution at the hands of the oligarchy and its paymasters in Washington would deal a heavy blow against the movement of the masses everywhere. All conscious workers and militant youth therefore have a duty to defend the Venezuelan Revolution with every means at their disposal. A careful study of this book will be of immense assistance in helping the vanguard to understand the Venezuelan Revolution, the better to defend it and help it to triumph.