Venezuelan Communist Party leader, Luís Fajardo, was killed on the evening of Wednesday 31 October, as he was returning home with his brother-in-law, Javier Aldana, who was also killed in the attack. Both men were riding a motorbike at 9pm when they were struck by a burst of gunfire from a moving vehicle. They were peasant activists and communist militants involved in the struggle for agrarian reform in the South of the Maracaibo Lake region and had already asked for protection as they had received death threats.

Read this article in Spanish on Lucha de Clases

Fajardo, 49, had been born in Portuguesa, but had lived in the Panamerican region across Mérida and Zulia, in the west of the country, for many years, where he had become one of the main peasant leaders. In 2001 he played a leading role in the struggle for the expropriation of Fundo Santa Ana estate, belonging to one of the main families of the oligarchy in Zulia.

Luís Fajardo had played a leading role in the recovery of the Caño Rico estate, spanning more than 500 hectares, from landowners who had left it fallow. Some 250 families of landless peasants had decided to occupy the estate and were fighting to get legal recognition from the Land Reform Institute (INTI).

The Communist Party had on several occasions denounced death threats against Fajardo, providing very specific information about those making the threats. In June this year, the party had denounced “intimidation and death threats” against its member “on the part of members of the National Guard (GNB) led by captain José Villasmil Toro, commander of the Border Post 32 in El Batey, in the Sucre municipality (Zulia) and adjunct sergeant Freddy Ojeda.”

The Communist Party (PCV) general secretary Oscar Figuera explained how “the national leadership of the party had denounced on countless instances death threats against our militant comrade Fajardo, but the authorities failed to take any adequate protection measures.” He added that the “South of the Lake landowners, members of the National Guard and corrupt politicians who publicly threatened him are responsible for the killing.” 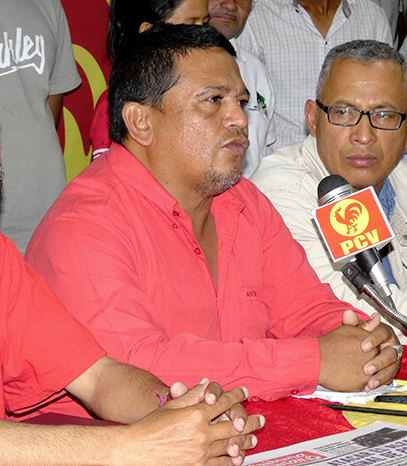 Luís Farjardo (pictured) and his brother-in-law, Javier Aldana, were peasant activists and communist militants involved in the struggle for agrarian reform and had already asked for protection as they had received death threats

Fajardo was also a leading figure in the Admirable Peasant March (Marcha Campesina Admirable) in July and August this year. Hundreds of peasants marched 450km from Guanare (Portuguesa) to the capital Caracas, to highlight the problems facing peasant activists, among them death threats and killings. After initially ignoring the march and preventing any mention of it in the state media, President Maduro met with the marchers in a meeting, which was broadcast live on national TV. A number of commitments were made to the peasants at that meeting, but they were quickly forgotten. The marchers then started a hunger strike in September which forced new commitments on the part of the government to fulfil the peasants’ demands.

A few hours after the meeting between President Maduro and the peasant marchers on 2 August, three leading peasant activists were killed in Barinas. The three killed had participated in the first stretch of the campesino march. The peasants were kidnapped by armed men, taken to another estate and shot dead. Spokespersons for the March pointed the finger at Ricardo Mora, a regional landowner. Two weeks later three people were arrested in connection with the murder, including Ricardo Mora, who was detained in Bogotá.

The South of the Lake region, spanning along the Panamerican road across Merida and Zulia states, has seen some of the most violent conflicts over agrarian reform. This is also a route for Colombian paramilitary infiltration into Venezuela.

The leadership of the PCV has demanded from the authorities “an exhaustive investigation and exemplary punishment for the culprits”. However, the struggle for agrarian reform in Venezuela is littered with examples of peasant activists killed with impunity.

Earlier this month, another PCV activist faced an attempt on his life. On 9 October, Robinson García, a communist and peasant leader in Barinas, was driving towards the regional capital from the plot of land he tends to denounce threats against his life. He was set upon by a car and three motorbikes from which he was shot at. García is part of a group of families cultivating land in the Los Cerros estate, in Obispos, Barinas. This is a 400-hectare, state-owned landed estate that has been left idle. The peasants are demanding legal recognition of their right to cultivate the land. Days before the attack, Robinson Garcia had attempted to lodge a case with the Secretariat of Security of the regional Governor as he had identified several suspicious cars following him and feared for his life. The regional police refused to file his case. The car that led the attack against him was the same he had seen previously and wanted to report.

For many months now, the situation in the countryside in Venezuela has worsened. As we explained in July, “in the countryside, there is a coordinated offensive to dismantle the gains of the agrarian reform that was carried out under Chavez with the expropriation of big landed estates, which were given to peasant communes. Private capitalist landowners buy off local judges, officials at the Land Reform Institute (INTI) and National Guard officers to violently dispossess peasant collectives from land they had been legally granted by the INTI itself. In some cases, peasants have been arrested by the National Guard, in others threatened or killed by the hired goons (sicarios) of the landowners, which in some cases are connected to the state bureaucracy and in others to the reactionary opposition.”

An unholy alliance of landowners, judges, regional INTI officials, army and National Guard officers is waging an assault against the measures of agrarian reform already taken and preventing any more estates from being expropriated, at a time when food scarcity is a major issue affecting Venezuelan workers and the poor.

The class struggle in Venezuela’s countryside is part of a more general struggle that confronts the Bolivarian revolution with the interests of capitalism, landlords and imperialism, and demonstrates the need to build a new revolutionary leadership that is firmly committed to the interests of the working class and the peasants.