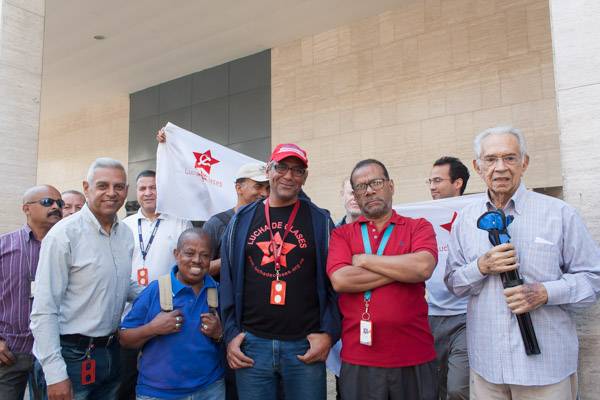 On 5 February, two trade union leaders at the Bank Deposit Social Protection Fund - FOGADE, a state institution, received a notification of prohibition of entry into their workplace, a request for qualification of dismissal and a summons before the Labour Inspectorate for today, 7 February. This is a clear case of trade union repression that affects the general secretary of the Sutrabfogade union, William Prieto, and the health and safety delegate William Guzmán. We appeal to all our readers and supporters to send protest messages.

This is the latest step in an escalation which started on 27 January, when both trade union leaders were notified of a change in the directorate where they work, which was already a violation of their trade union rights. They refused to accept it, and on 28 January, security guards denied them access to their workplace. On the same day, security guards entered the union offices within FOGADE without permission.

On 30 January, the trade unionists of the Sutrabfogade held a public press conference to report these abuses and specifically stated the responsibility of the General Manager of Administration and Finance of the institution, Mileydi Galán, and the Infrastructure Manager, Verónica Mujica. William Prieto publicly denounced an assault by General Manager Mileydi Galán, which had taken place during the illegal raid on the union office.

On 3 February, both trade unionists were summoned to appear before the Prosecutor's Office 64 with competences in women's affairs, following allegations lodged by these two female managers. The hearing was on 4 February, in which the workers defended themselves against the accusations with video material and witnesses that demonstrated the aggressive attitude of the managers towards the union leaders and not the other way round. The Prosecutor's Office asked William Prieto and William Guzmán to submit their allegations in writing in the following days.

On 5 February, the two union leaders received a notification of prohibition of entry into their workplace, a request for qualification of dismissal and a summons before the Labour Inspectorate for 6 February, all based on the complaint of the two Managers at the Public Prosecutor's Office 64. Other union members have also received dismissal qualifications.

It is clear that we are facing a serious case of anti-union harassment and repression in which management is using the allegations by the two managers to expedite the dismissal of the two trade unionists. Never has the Venezuelan justice acted so quickly. The Sutrabfogade has a long history of fighting in defence of workers' rights and against the deterioration of their conditions. This is why the institution's director, Arlene Piñate (daughter of Labour Minister Eduardo Piñate), wants to get rid of these annoying voices.

A protest rally has been called on 7 February to accompany the two trade unionists. The appointment is at 10 in the morning at the Labour Inspectorate, corner Honda Store, Altagracia Parish-Las Mercedes Building, Caracas.

We appeal to send protest messages rejecting this case of union repression to:

Minister of Popular Power for the Social Work Process:

With a copy to SUTRABFOGADE: