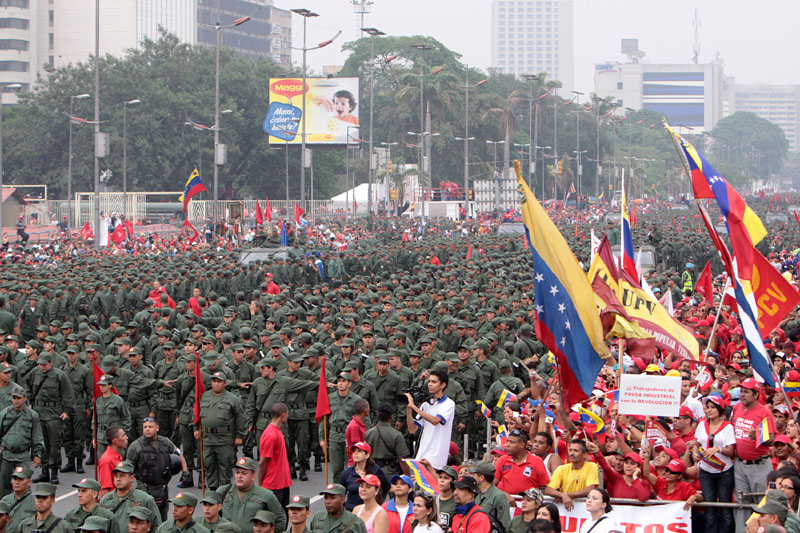 Alan Woods in Caracas describes the mood of the masses on the April 13 celebrations of the 8th anniversary of the failed right-wing coup. This time, as well as the usual red shirts, there was a massive display of the people’s militia clad in camouflage green, and carrying Russian-made AK-47s, a clear warning to the reactionary oligarchy that the masses are prepared to fight any attempt to turn the clock back.

Eight years ago something occurred that has no precedent in the history of Latin America. The reactionary coup of 11 April, in which the Venezuelan oligarchy, in collaboration with the US Embassy and the CIA, overthrew the democratically elected government, was defeated by a spontaneous uprising of the masses.

On that day history was made. Ordinary men and women came onto the streets, risking their lives to defend the Bolivarian Revolution. With no party, no leadership and no clear perspectives other than to defeat the coup, the workers, peasants, and revolutionary youth, women and men, young and old, marched in their thousands to the gates of the Miraflores Palace to demand the release of President Chávez. The soldiers went over to the side of the people, and the coup collapsed.

These heroic events can only be compared to Barcelona in July 1936, when the workers, armed with old hunting rifles, clubs and anything they could lay their hands on, stormed the barracks and smashed the fascist reactionaries. If anybody doubts that this was a genuine revolution, they have only to study the events of April 2002. 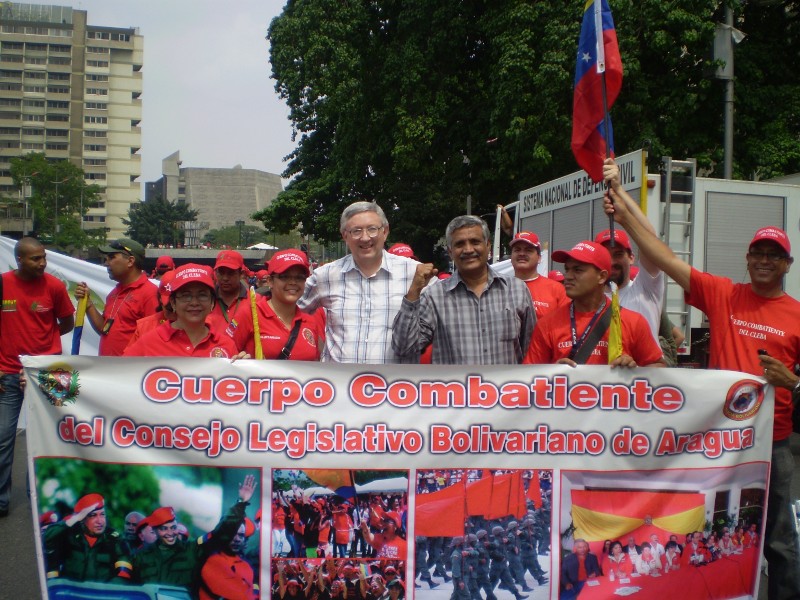 Alan Woods and Lal Khan and other bystanders celebrating the revolution In past years these events have been turned into a celebration of the Revolution. The Bolivar Avenue in downtown Caracas was a sea of red shirts and waving banners. But this year the scene was quite different to what I remember. Instead of a sea of red Bolivar Avenue was filled to overflowing with a sea of camouflage green. This was the Day of the People’s Militia – a demonstration of the power of a people in arms.

As you walked along the Avenue the files of militiamen and militiawomen (there were many women also in uniform) seemed to have no end. Here once again one could sense the unconquerable power of the masses. But now there was a different element. Here were thousands upon thousands of workers from the factories, peasants from the villages, and young kids from the schools and colleges, expressing their willingness to fight, arms in hand, to defend the Revolution against enemies – both external and internal.

Under a blazing sun, the people massed – the usual red shirts of the chavistas alongside the green-clad militia. Along the Avenue the loudspeakers blared out revolutionary slogans: against imperialism, against the bourgeoisie, for the Revolution, for socialism, and for Chávez: “The Right is still preparing another 11 April, but now the People have arms! Long live the Bolivarian Revolution! Long live the Armed People! Long live President Chávez!”

People climbed trees and lampposts to get a better view and to display placards with militant slogans, while some made a quick profit selling hats, tee-shirts and cold drinks (which were much in demand). There was a deafening roar of music – Latin American rhythms with revolutionary words, interrupted by chants and slogans. The militia was organized by groups that showed their origins: young teenagers from the schools and peasants with straw hats and tractors with Belarus written on the side. 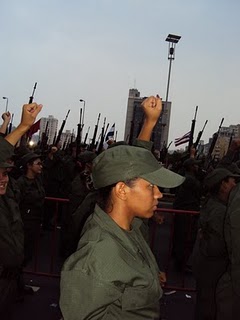 To the rear, the militia was unarmed, but as one approached the head of the demonstration, everyone was holding a Russian-made AK-47, that most versatile and effective weapon, light and easy to use. In recent years Chávez has bought large quantities of these weapons from Russia. Washington and its hired media have made a tremendous fuss, alleging that these guns are destined for the FARC guerrillas in Colombia. Now everyone can see what they are really intended for.

As they wait for the arrival of the President, the militias stand listlessly, or sit on the ground to eat a sandwich. Some rest on their rifles, and one or two even had the muzzle of their AK-47s resting on their boot – a somewhat risky practice, one would have thought. In fact a professional drill sergeant would doubtless have a heart attack, looking at these half-trained civilians with guns.

But this impression would be entirely false. These militias are the lineal descendants of the Cuban guerrillas, of the militias that fought Franco in the Spanish Civil War, of the workers´ militias that overthrew the Tsar in Russia in 1917, and if we go even further back in history, of the armies of the French Revolution and the militias of the American Revolution in the 18th century.

Late in the afternoon, a mood of expectancy can be noticed. The militia begins to form ranks. The crowd on the pavements pushes forward to catch a glimpse of their hero. Chávez appears, dressed in army uniform, riding on the back of an open vehicle – an ordinary army truck – saluting and waving to the militia and the crowd. The militia marches forward towards the tribune where Chávez is to deliver his speech. 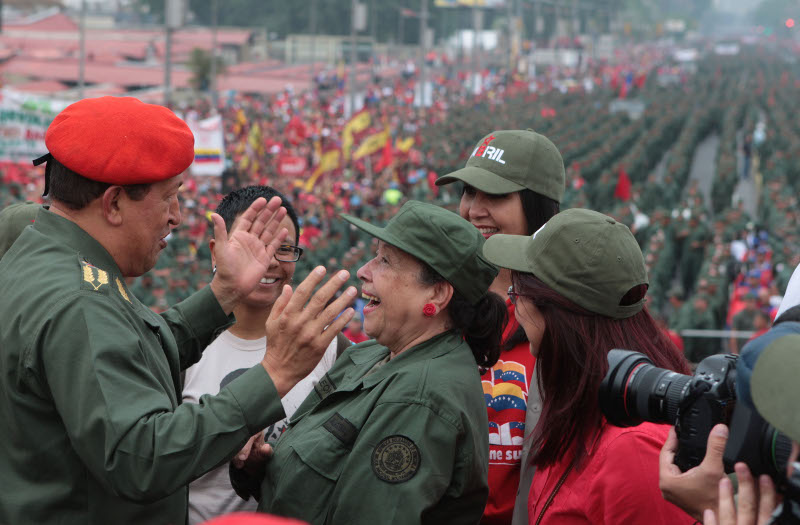 Photo by Prensa Presidencial His speech was shorter than in the past, but went straight to the point. Recalling the dramatic events of April 2002, he pulls out a magnificent sword and shows it to the multitude. It is the sword of Simon Bolivar – El Libertador (The Liberator). He tells the people that the liberation of Latin America has not been achieved for 200 years and can only be achieved through socialist revolution.

In the kind of dramatic gesture that is characteristic of him, he makes the people swear a sacred oath: that they will never rest until this task is accomplished. The militias repeat the words loudly, holding their rifles in the air. “The militia is the People, and the People is the militia,” he proclaims.

Then Chávez recounts the events of April 2002, from the fascist coup of 11 April to the popular-military uprising of 13 April. “I have been thinking a lot about this,” he says. “Ever since the 1970s, some people have been dreaming of a popular-military rebellion. But it never occurred. The 1980s was a black period that ended in the Caracazo of 1989, with a massacre of unarmed civilians.”

Chávez then recalled how he and a group of progressive army officers tried to stage a rebellion in 1992: “We failed because this was a military uprising without the People,” he concluded. After a spell in prison, he recalled the formation of a mass movement: the Bolivarian Movement, which swept to power in the 1998 elections. But the oligarchy lost no time in preparing the coup of 2002.

Chávez recalled the men and women who died in the coup, and the many more who were wounded. Contrary to the myth so assiduously spread by the media in the West about the allegedly repressive and dictatorial regime in Venezuela, nobody is in prison for these crimes, and eight years later the judicial investigations are still dragging on: “Let there be no impunity for this massacre, as there has been impunity for so many other massacres in our history!” he said.

He then went on to say that the blood of these martyrs of the Revolution acted as a spur to the Revolution. “Immediately after the 11 April there began the arrests and manhunts, the threats on television and the other media. But this aroused all the latent pent-up power of the masses that had been suppressed for so long,” he said. “This gave rise to the greatest rebellion in our history – the popular uprising we had waited so long to see.”

Chávez pointed out that US imperialism was actively involved in the coup. US helicopters and spy planes were flying over Venezuelan air space, a US submarine and an aircraft carrier were in Venezuelan waters waiting to intervene. But the movement of the masses forced them to withdraw.

Ever since then the bourgeois media have tried to wipe that date out of the calendar, but the masses have kept it alive. “They cannot wipe April from the calendar, any more than they can wipe out January, February or any other month.”

Chávez observed that, if they had succeeded in crushing the Venezuelan Revolution, it would have dealt a heavy blow against the revolutionary movement throughout Latin America. “On our shoulders a heavy responsibility lies,” he said. “The peoples of Latin America are looking to us for their salvation.” Admitting that the Revolution was far from completed and that there was a colossal amount still to be done, he appealed for patience. “After its first decade, the Revolution has hardly begun,” he said.

Chávez then warned that the threat of counterrevolution had not gone away, and that there were conspiracies to assassinate him. He said that if this occurred: “Do not lose your heads, keep calm. You know what you have to do: take the power into your own hands – ALL the power! Expropriate the banks, the industries, the monopolies that remain in the hands of the bourgeoisie.”

Turning to the September elections he warned: “We cannot allow the bourgeoisie to take control of the National Assembly. If they do, they will use it to destabilize the country and create the conditions for another 11 April. We must win two thirds of the seats in order to press on with our programme.”

He warned the bourgeoisie that it was not possible to repeat what happened in April 2002, because the people were now armed and would crush any counterrevolutionary attempt. He finished with the words: Long live the National Militia!” Long live the People in Arms! Long Live the Socialist Revolution! Patria, socialism o muerte!