Details
our correspondent in Caracas
13 November 2008

Share
Tweet
The recent trade union conference of the Marxist Tendency (CMR) in Venezuela saw the participation of workers from all the key industrial areas of the country and a whole series of factories that are in struggle and demanding nationalisation. The Tendency is becoming an important point of reference for militant workers throughout the country. 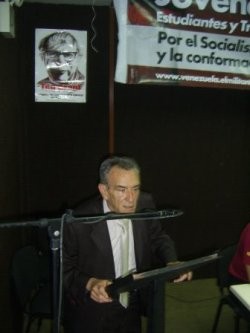 On November 7th and 8th nearly 70 trade unionists and workers gathered in Parque Central, Caracas to celebrate the first national Trade Union Conference of the CMR (Corriente Marxista Revolucionaria, Venezuelan section of the IMT). This meeting proved to be a huge success with workers present from every important industrial centre of Venezuela, representing a major step forward in the work of the CMR in the trade unions.

There were workers from the states of Carabobo, Bolívar, Zulia, Anzoátegui, Aragua, Miranda, Portugesa and D.C. Among these were workers from such important factories as PDVSA (the national oil company), CANTV (the recently nationalised telecom company), CEMEX (the recently nationalised cement industry), SIDOR (the massive steel factory in Guayana that was re-nationalized in April after a long struggle) and the auto industry of Anzoategui, such as the Mitsubishi factory in Barcelona. Furthermore, we had the attendance of workers from INVEVAL (nationalised factory under workers' control) and INAF (occupied factory in struggle for expropriation).

The Minister of Labour, Roberto Hérnandez also attended part of the meeting and made a speech were he saluted the CMR trade union conference and said that he was in favour of “every event that promotes the unity of the working class”. According to the minister, the lack of working class unity resulted in terrible defeats in the past. He gave the example of Germany in the past, where he stressed the inability of the leaders of the Communist Party and the Social Democratic Party to unite in a joint fight against Fascism. The result was Hitler's regime and the iron heel of Fascism.

The conference kicked off with a debate on World and Venezuelan Perspectives. The lead off was given by Richard López from INAF and Leonardo Badell from the CMR central committee. This was followed by an enthusiastic discussion where the concrete experiences from factories was brought into the discussion and general conclusions were drawn. 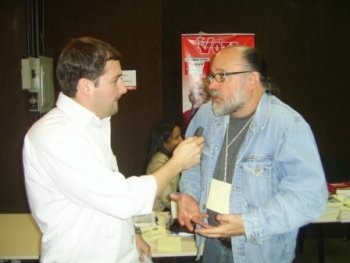 One of the main points in the discussion was that the break up of the UNT in 2006 and its inability to react on Chávez’s appeals for factory occupations had been a criminal mistake on the part of the UNT leadership. The main problem is that the working class has been held back by its own leadership and thus it has been unable to play a leading role in the revolution. To build socialism, the working class must put itself at the head of the movement, expropriate the capitalists, smash the bourgeois state apparatus and build a new revolutionary workers' state.

What is necessary is to forge unity, yes, but not on a bureaucratic model, What is required is real unity from below. This can only be achieved through the democratic discussion of a programme of action in the rank and file of the Venezuelan trade union movement. Therefore, one of the main decisions of the conference was that a series of regional conferences on the same lines should be organised to spread these ideas to the hundreds of local trade unions throughout the country.

This was also the main question in the next discussion, which was dedicated to the debate on a new trade union document of the CMR. Luís Primo gave a passionate speech where he analysed the history of the Venezuelan trade union movement and outlined the tasks ahead.

He was followed by several interventions, notably Hector Guerra from the Revolutionary Front of Steel Workers (a group of SIDOR workers). Hector gave an account of the struggle at SIDOR and the problems that the workers are now facing. The factory was nationalized in April after a long dispute and now the question of workers' control is a crucial one. Hector stressed the point that he and his comrades do not want a bureaucratic bourgeois state model imposed on SIDOR but are fighting for real workers' control. 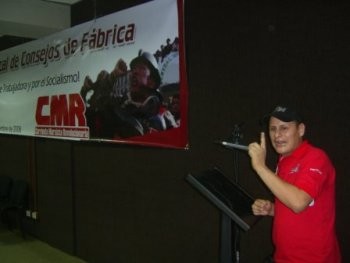 Nelson Rodriguez from INVEVAL also intervened to share the experience of the struggle in this factory with the other comrades present. He explained how the setting up of a factory council in INVEVAL, elected by the workers' assembly and subject to the right of recall, had been a decisive step. The workers of INVEVAL had opened up the books, revealing the accounts that had previously been reserved only for the eyes of management, and can now see clearly how surplus is generated in the production process and are thus capable of deciding how it should be distributed.

Other crucial questions such as ”The transitional programme for the taking of power by the working class” and ”Factory councils and workers’ control” were debated in depth. A particularly interesting discussion took place on ”What is trade unionism of a new type?”, in which Felix Martinez, leader of the trade union at the Mitsubishi auto plant in Barcelona, Anzoategui, gave an account of the valuable experience that these comrades have accumulated. He gave a detailed account of how they began some years ago to transform the trade union from its old reformist outlook into a real revolutionary tool at the service of the workers.

Felix gave examples of how they organized the workers into different commissions in charge of specific tasks, with all representatives being elected by the workers’ assembly and subject to the right to recall. They also use sports and cultural activities as a tool to organize the workers and involve them in the trade union. They had also taken the initiative to transform the regional UNT and clean up its finances. 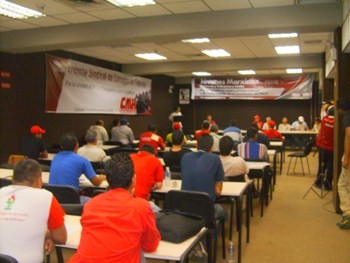 Through the revolutionary methods employed by the comrades, they had won the best collective bargaining agreement in the whole state of Anzoátegui state. But this was only one stage in the struggle. He ended his contribution by stressing the need for the complete elimination of private property of the means of production. “Only with the ideas of Marxism can the workers take the revolution to the final victory!”, which provoked a standing ovation.

The meeting ended on Saturday (November 8th) when a number of resolutions were approved. The conference appealed for support for the candidates of the PSUV in the forthcoming regional and local elections. The conference also voted a resolution in solidarity with the workers at the following factories: Gotcha, INAF, ASERVEN, MDS, JOHNSON Control, DOMEGAS, VIVEX, DURAPLAST. These workers are mobilised and are calling on the Bolivarian government to nationalise their factories.

On Saturday afternoon the meeting closed with the singing of the Internationale.

This meeting clearly demonstrated how the CMR is now capable of gathering important sectors of the working class around its banner. We are becoming a real force within the Venezuelan trade union movement. One of the reasons for our success is that there is a huge vacuum on the left within the workers' movement. Workers throughout the country are pushing for unity on a programme of action. They want the UNT to play a real role in the revolution, not stand on the sidelines. The attendance of important sectors of the class at the CMR trade union conference confirms this. Now the task is to continue building the CMR in the industrial areas represented in this conference.