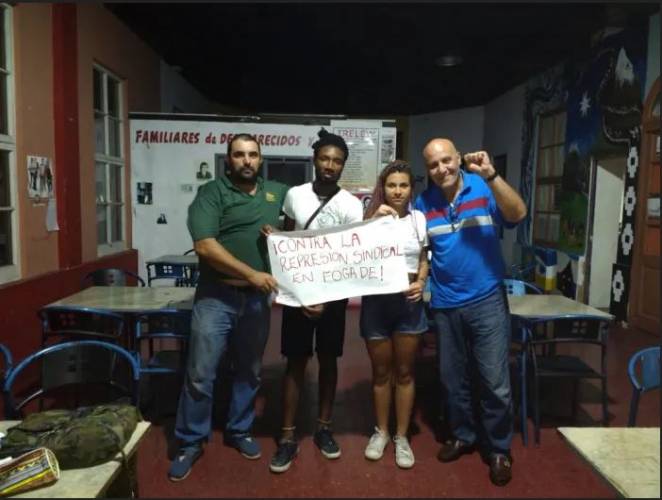 Members of the Sutrabfogade union (including the general secretary) are facing dismissal from the state company Fogade, following a slew of false allegations from the management. These attacks on unionists are evidence of the anti-labour drift of the Maduro government. The IMT sends its solidarity to the comrades affected by the case.

The union leaders of Fogade are directly suffering from the anti-labour and anti-union policies applied ruthlessly by the Maduro government, especially in public institutions. They have been denied access to their jobs, they have been falsely accused of gendered violence and also face a request for qualification of their dismissal.

After being permitted access their respective case files (with an unjustified delay from the Labor Inspectorate), William Prieto (General Secretary of Sutrabfogade and leader of Lucha de Clases), and William Guzmán (Health and Safety Rep), found that – in addition to the allegations of psychological violence against the General Manager of Administration and Finance of the institution, Mileydi Galán and Infrastructure Manager, Verónica Mujica – they are accused of breaching working hours. The union delegates strongly deny this. The lack of evidence of the alleged “verbal aggression” against the aforementioned managers, and the legal impossibility of sustaining the removal of the comrades from their jobs until the allegations in the case are settled definitively, forced the Fogade management to resort to this last-minute fallacy. This evinces employer retaliation and determination to behead Sutrafogade by any means necessary.

On 19 February, the prosecutor – the management of Fogade – presented witnesses to the Labor Inspectorate. Around 10 employees of the institution appeared to testify against the union delegates. According to Sutrabfogade representatives, there is audio evidence that demonstrates how management has coerced these employees by threatening them with withdrawing medical treatment benefits (upon which some heavily rely), or even dismissal unless they agree to corroborate the accusations against Wlliam Prieto and William Guzman. Naturally, many of these workers cannot risk losing their jobs or benefits, which are already precarious and will continue to deteriorate under the same state employer that is pushing them to attack those who have defended their interests. Also, it should be noted that several of these coerced workers have contacted union delegates to apologise for their actions, while others, who have also been approached by management, have stated that they will not submit themselves to this circus.

There are still several hearings where Fogade workers will present their defence and witnesses, and then wait for a decision from the Labor Inspectorate on whether the request for their dismissal is appropriate or not. The trade union delegates understand the process is rigged, and how difficult it will be to achieve a favourable decision, given the institutional nepotism prevailing in Venezuela. It is worth remembering that the President of Fogade, Arlén Piñate, is the daughter of the current Minister of Labor.

It has to be mentioned that the union delegates have not been able to count on open shows of support on the part of the workers of the institution, who have not participated in great numbers in calls for protest, either at the headquarters of Fogade or the Labor Inspectorate, either due to fear of dismissal or because of the atmosphere of widespread apathy that runs through the Venezuelan working class. The latter has been caused by the deep social ebb resulting from the fatigue of the masses in the face of years of terrible crisis, the open betrayal of the Bolivarian leadership, and bureaucratic asphyxiation of all instances of worker and popular participation. The case of the two workers affiliated with Sutrabfogade who have already been laid off testify to this. These workers chose not to fight against their dismissal and decided to look for other new sources of employment. The above demonstrates, on a small scale, how the present historical conditions have degraded the fighting will of the militant Venezuelan working class, which, a decade ago, took over factories, created workers’ councils and control, and pushed the revolution forward. Now, in a clear situation of weakness, the working class is atomised and its members denied the avenues of collective struggle available to them in the past. Proletarian organisations and trade unions have to deal, on a daily basis, with the fact that the majority of workers are looking for individual solutions to their problems (via migration, the informal economy, etc.)

Understanding that such abuses represent acts of political retaliation, Sutrabfogade and Lucha de Clases have acted accordingly, denouncing the injustice committed against the comrades, which again exemplifies the government's anti-labour and anti-union orientation in imposing its anti-popular adjustment policy. On 7 February, during the first appearance of the trade union delegates before the Labor Inspectorate, the participation and solidarity of the Communist Party of Venezuela (PCV) was shown through the presence of several members of its political bureau. Representatives of the Youth For the Fatherland Movement (JPP) – which brings together the youth of the Patria Para Todos (PPT) party and leaders of the National Fight Front of the Working Class (FNLCT) – were also present. Furthermore, there have been numerous examples of international solidarity through letters, pronouncements, photographs and signatures, aimed at repudiating and making visible the struggle of Sutrabfogade. Leaders and trade unionists from Mexico, Brazil, Argentina, El Salvador, USA, Spain, Italy, Greece, Denmark and New Zealand, expressed their disagreement with the direction and management of Fogade.